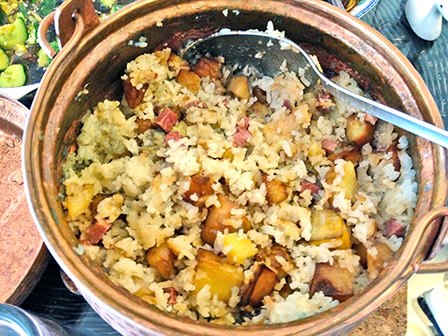 Editor's note: Roz Weitzman has been working in China for seven years as an international school principal. An avid cook, Roz has epublished a cookbook entitled "Roz Weitzman's World of Chinese Comfort Food." It can be purchased at both Lulu and Amazon.

Since moving to Kunming she has begun to explore the cooking traditions of Yunnan. More of Roz's recipes can be viewed on her blog (requires proxy) and PDF versions of her book can be obtained by reaching her at roz[at]candismail[dot]com[dot]cn. Bon appétit.

Fuxian Lake (抚仙湖) and the county seat of Chengjiang (澄江) are growing more popular by the minute. The area has become a summer destination for tourists from around China. Mammoth resorts are popping up along the lake shore replacing mom-and-pop restaurants and hotels. One thing that seems destined to survive the arrival of mass tourism is the local food.

Restaurants around the lake serve up delicious local dishes and one of the most popular is copper pot rice — or tongguofan (铜锅饭). For this recipe we will focus on the rice dish, which can be a hearty addition to almost any Chinese meal. Besides the use of a copper pot, what makes this dish stand out is the use of Xuanwei ham (宣威火腿). To hear people from Yunnan tell it, this is far and away the best ham in China. It is rich and tender with a lovely aroma and beautiful appearance.

Although salt-cured and smoke-dried in eastern Yunnan since the 1700s, Xuanwei ham did not receive international attention until 1915. That year it was put on display in San Diego at the Panama-California Exposition celebrating the completion of the Panama Canal.

Copper pot rice derives much of its wonderful flavor from the ham but the pot is equally important. You can find small copper pots at the kitchen supply market Dashanghui (大商汇) for around 220 yuan.

Mine is the smallest size I could find. It would easily be triple or quadruple the price were it bought in North America. Using the proportions below will make enough for three people. Doubling or trebling the recipe should be no problem provided you have a large enough pot. Vegetarians can substitute peas for the ham. 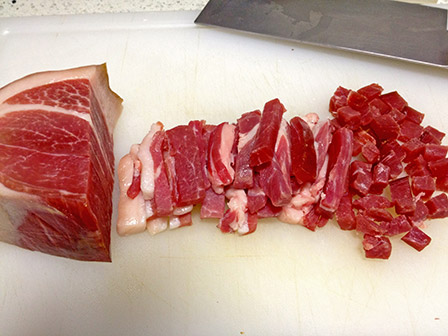 Soak rice in two cups of water for two hours. Coat the inner wall of the copper pot with one tablespoon cooking oil. Drain rice and place in the oiled pot.

In a wok heat two tablespoons of oil to medium-high temperature. Fry the cubed ham until browned and crispy. Remove ham with a slotted-spoon and put the cubes into the copper pot, leaving the oil in the wok.

Add the remaining oil to the wok and heat on high. Carefully add potatoes to oil, frying and turning frequently until the potato chunks are cooked on the inside and golden brown and crispy on the outside. This should take roughly ten minutes.

Transfer potatoes into the copper pot together with the ham and uncooked rice, also adding two cups of water. Cover the pot and bring the mixture to a boil. Once the water is boiling, give the ingredients one stir and turn the heat to low.

Simmer while covered for 20-30 minutes or until the rice is cooked. Check the rice at ten-minute intervals and add more water if necessary. Remove from heat, place the pot on a trivet or hot pad on the table and your delicious copper pot rice is ready to serve. Enjoy! 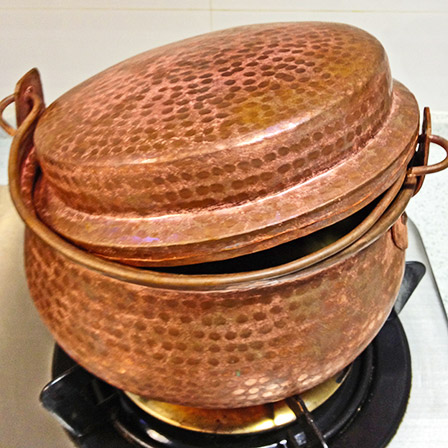 Can anyone give the exact location?

@Roz
Thanks loads - I absolutely love this dish! Thought I'd have to travel back into the Yunnan countryside or lakeside restaurants to savor this treat again - thanks mucho again!