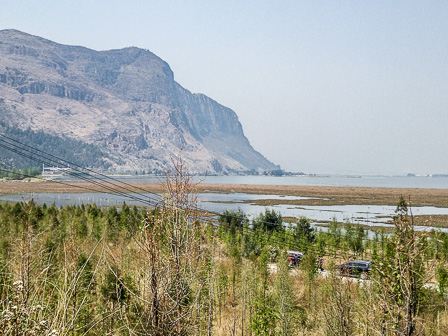 Against our better judgment, we climbed on our bikes on a recent sunny but hazy day, determined to cycle along the mythical bike trail around Dianchi Lake. Kunming newspapers had run stories in 2008 announcing construction of the path. Once finished, the reports claimed, the paved trail would encircle the lake and be closed to motorized traffic.

Five years on the path remains as elusive as ever, mostly because it was never built. Instead we took a rather normal route through the city, winding our way through traffic until we reached the promenade overlooking the lake. From there we crossed the causeway to the west of Haigeng Park (海埂公园) and started the ride in earnest. 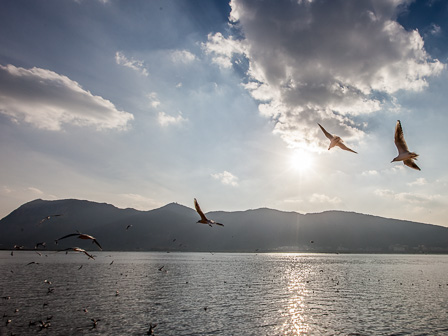 View from the Dianchi promenade at sunset

The road veered left under the shadow of Xishan (西山), running beside the Gaohai Expressway (高海高速) that eventually merges with Highway G8511 south of Jinning (晋宁). Initially traffic was light and we saw more cyclists than cars. The lake stretched greenish-blue to our left but most of the view was swallowed up in the lingering haze.

Before we reached the tiny town of Haikou (海口) we cycled past at least five temples. Some of them appeared shiny and new while others were simple single structure affairs lacking even the archetypal attention-grabbing gate. The road swung slowly up into the hills away from the lake.

Typical of the rumpled landscape around Kunming, the hills were marked by all the usual signs of constant human alteration. Where the land was not tilled and crying out for water it was scarred by quarries and mining projects abandoned long ago. 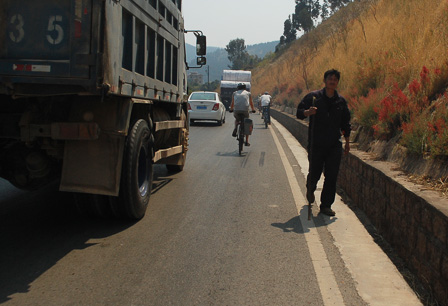 Roughly 30 kilometers outside of Kunming we came to Haikou. Choosing one of more than a dozen identical restaurants lining the main road we sat down for lunch. It was three in the afternoon — an odd time for lunch — and we had the place to ourselves. Our waitress was also the owner and cook. She prepared us a hearty lunch highlighted by a fantastic fennel soup.

Traffic increased noticeably outside of Haikou, as did the slope of the road. Considering the number of different vehicles plying the highway, we made decent time. We swerved through bunches of blue dump trucks spewing exhaust as their engines strained with effort.

On the outskirts of Jinning the road, which had been in good repair, took a decided turn for the worse. It was terribly rutted and smashed gravel mixed treacherously with water leaked from the hydraulic brakes of innumerable transport trucks. Countryside terrain quickly gave way to a village in the process of being razed to the ground. 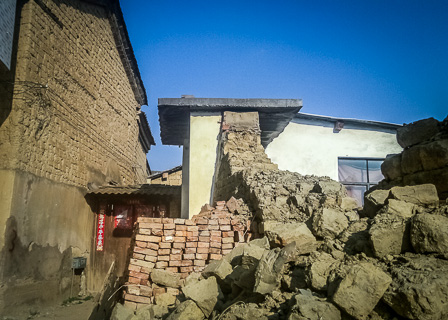 We emerged from the demolished village into Jinning proper. The city was larger than we expected, with tree-lined streets and light traffic that was momentarily confusing in its navigational simplicity. What was not so easy was finding accommodations. Finally, after searching for nearly half an hour, we checked into a mid-range hotel. We unpacked quickly and were preparing to head to dinner when there was a knock at the door.

The woman from reception was standing sheepishly in the hallway. She explained that the police had called to inform her the hotel was not authorized to lodge foreigners. In fact, there were only two hotels in the entire city where laowai were allowed to sleep. Luckily one of them was around the corner.

The new hotel, perhaps predictably, was more expensive and not nearly as comfortable as our first choice had been. Regardless, it was getting late and we were famished. It would do.

After eating dinner at a charming hole-in-the-wall place we wandered through the darkened streets of Jinning. Parts of the town reminded us of Lincang — gigantic boulevards were under construction in the middle of town even though traffic congestion seemed the least of Jinning's problems.

The next morning began with a complimentary buffet of build-your-own mixian. It was quite the spread. When we enquired about coffee the obviously bored staff could barely stifle their laughter.

The road out of Jinning was a slow uphill grind. Huge trucks blasted their horns behind us and then fell back as the grade became too steep. At the top of the hill we ran into a tollgate. The exit to the free road was a bit hidden and could only be approached by crossing three lanes of oncoming traffic. 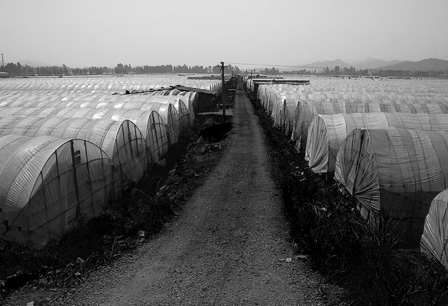 The road led through sleepy villages overlooking the southern stretches of the lake. A string of quarries finally ended and was replaced by field after field of plastic greenhouses. Those in turn yielded to nurseries growing a bewildering array of trees, shrubs and flowers.

Further on the tower blocks of Chenggong began to materialize in the haze. The dusty farm road we had been following spit us unceremoniously out onto a ridiculously huge thouroughfare. Four main lanes headed in each direction and were flanked by two-lane roads presumably built for slower traffic and buses. These were in turn lined by five-meter wide bicycle lanes.

Across this intersection stood the sad remains of yet another destroyed village. In amongst the piles of rubble stood two traditional courtyard houses. Behind one a man slowly loaded salvageable bricks into a dilapidated mianbaoche. A nearly finished collection of apartment buildings towered over everything. The buildings provided an unnecessary exclamation point for the entire scene. 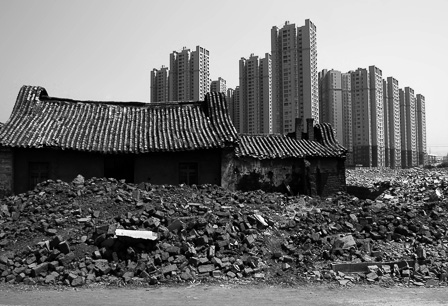 Out with the old and in with the new

Returning to the main road we noticed the streetlights were crowned with both solar arrays and small windmills designed to look like flying birds. The propellers of the windmills provided a constant, and somewhat annoying, whirring noise that may someday be replaced by the sound of incessant traffic. The day we pedalled along the boulevard however, we were often able to crisscross the entire street multiple times due to an almost complete lack of vehicles.

Eventually we made it back into the city and found ourselves on Guangfu Lu. Our 130 kilometer ride had not been a thing of beauty but it was not all bad either. We were able to catch several glimpses of what the area around Dianchi Lake once was and what it will apparently be in the future.

The destruction theme continued for a bit longer as we stumbled upon a defiant building that had been toppled but refused to come apart. The sight was a fitting end to our trip. 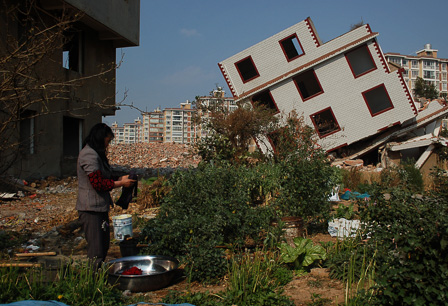 The house that wouldn't die

After Haikou, the ride sounds ugly. I've found nice side roads through the villages up till Haikou.

Jinning is the birthplace of the great Ming Dynasty eunuch trade ambassador, Admiral Zheng He. Supposedly there is a Zheng He museum in the town of Kunyang in Jinning county...not sure where that is, but would be interesting to try to track down at some point. This guy is one of the most important figures in China's history.

I thought any hotel in Yunnan could take foreigners? I have never been denied but then again I have never tried the real dodgy places... Has this rule changed? Or was it only in my imagination?

Any hotel in Kunming probably can, but as you venture out to the smaller cities of China, you will find that many hotels are not setup to register foreign guests. When you get very rural, it's actually easier to find lodging as many places then don't bother with registration. The rule is still on the books, but most big city hotels can comply now and most small village ones don't bother. It's 3rd tier non-tourist towns where you tend to encounter this issue.

I can confirm what AlexKMG says, and it seems particularly true for third-tier cities in Honghe Prefecture, such as Kaiyuan or Gejiu. In Gejiu I was told only two hotels (except for the bunch around the bus station) accept foreigners, and they're not on the cheap side.

Good article, thanks was considering trying to do the same sometime.

Perhaps a stupid question judging from the article, but is it possible to accomplish this route with a strictly road bike?