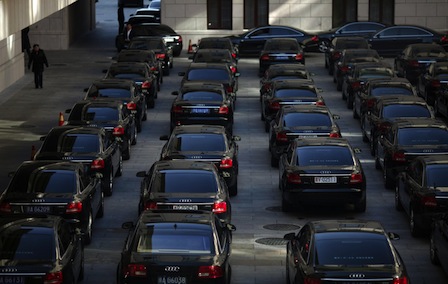 The minister of Honghe prefecture's propaganda department has suggested that "micro reforms" could improve government transparency and accountability. The comments, posted by Wu Hao (宣传) via his Weibo account, have received national press attention and generated a heated online debate regarding high-ranking government workers' entitlements.

In his online remarks, Wu refuted claims made on the internet that he had sole access to an expensive, and free, government vehicle. While official cars are nothing new, netizens reported Wu had used the car extensively as his private vehicle.

In response, Wu released the license plate number of the car in question (云G99099). He said more plate numbers from his department would be made available in the near future.

He went on to encourage the 1.8 million people following him on Weibo to help track the use of his and other official cars. Although making government license plates public knowledge is not an official policy, Wu said he hoped other government workers would follow his lead.

Small measures such as these are what Wu has referred to as "micro reforms" that may begin to shed light on officials' activities. "It is a fact, and is also a problem that, nationwide, city and township-level officials and even village heads use government vehicles for private use," Wu explained.

One solution, Wu suggested, would be to set up watchdog groups made up of concerned citizens and officials. They would be tasked with tracking government-funded expenditures on such things as official car use, banquets and receptions.

Since coming to power in November 2012, president Xi Jinping (习近平) has stressed limiting or eliminating many government perks as a way to save money. The push to curb expenditures has already led to some high-profile casualties, namely in Guangdong, where four officials were suspended during Spring Festival after they used a government car while going out to dinner.

Was amazed on our trip to Dali and Lijiang last fall how many Toyota SUV's,BMW's, and Mercedes we saw on the road. My wife kept saying many had military or government plates and then would see them later and often entire families would pile out.

Yes, because they never cover their license plate when they eat at fancy restaurants or drive around town...*end sarcasm*

Ja, is just one aspect of the greed, attachment and desire regardless of the suffering it creates

I am shocked how polluting the buses are in kunming. Those responsible are having a heavy karma that will probably lead them to unfortunate rebirth in some other planet

Government Officials in the USA are bigger public thiefs than just using a government vehicle. They agggressively shake you down whenever you need a permit or license to do something. To top it all off, many want a free meal on you at a nice restaurant after your business with them is concluded. Like their dining company will make up for the injustice.