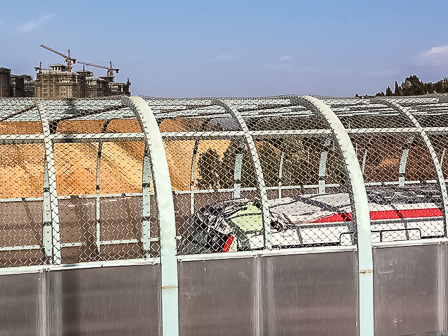 An unloaded subway train derailed Tuesday in the Chenggong section of Kunming's metro. During a routine trial run a train carrying two drivers left the tracks, killing one conductor and injuring another. Photos of the accident show the front of the train suffered extensive damage to both the windshield and roof.

The train was approaching the Dounan Station (斗南站) in southern Kunming and had just emerged from a tunnel when the derailment occurred. The deceased conductor was not killed by the crash but rather by a ceiling-mounted heating unit falling on him, according to media reports. Information regarding the slain conductor has not been released.

No reasons for the derailment have yet been given but an investigation by the Kunming Rail Transit Company Ltd (昆明轨道交通有限公司), which operates the city subway, is underway. Subway test runs in Chenggong began last November in preparation for the opening of Metro Line 1. 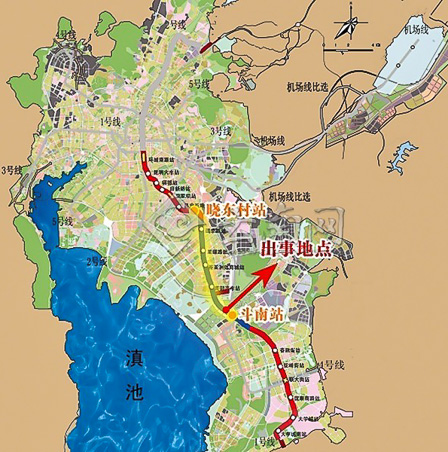 A map of where the accident occurred

Conflicting reports issued by different news outlets have listed the opening date as early as December 31, 2012, and as late as February 2013. Currently, local newspaper Life is reporting the subway line's scheduled premier will coincide with Spring Festival, which this year falls on February 10. No announcements regarding scheduling changes have been made since the incident.

The accident underlines continuing safety concerns that have plagued the Kunming subway. In 2011 a subway crash in Shanghai was blamed on trains manufactured by China South Locomotive & Rolling Stock Corporation Ltd (CSR).

Tuesday's accident will surely raise new questions regarding the soundness of the subway's safety system. Also coming under scrutiny is the age of the man operating the train at the time of the accident. The driver, Chen Junmin (陈俊民), is only 19-years old but reportedly fully certified to be a subway conductor. He suffered minor injuries in the derailment.

This is the third subway-related accident in China in the past two weeks. A New Year's Eve collapse of a Shanghai Metro parking structure killed five and injured 18 others. That was followed two days later by an incident in a Nanning subway tunnel that hurt several construction workers.

Someone should do a video on the extreme sport of riding subways in China. "At anytime, this train could jump off the tracks, or a support column could collapse, or a parking building could fall down... this is dofu dregg construction... this is EXTREME SUBWAY RIDING"... and then just be sitting on the subway, looking worried. You could string it together with heaps of radical camera movements and some slowed down footage of stepping onto the train.

Whose game to ride the subway in the first 6 months?

haha! Do you realise the potential irony such a plan has? You'll be shooting the vid and the thing will actually collapse.

I think we would be upset if something disastrous didn't happen! Wonder if you could make a business selling subway survival suits... some sort of step into suit with tonnes of pillows sewn to the outside and a huge helmet. The suit could be strapped to the inside of the train in case of sudden changes in speed as a result of derailment!

I doubt there will be heaters installed in the passenger cars,,so no problems if derailment occurs.