17 killed in Yunnan mine explosion; 2 arrested 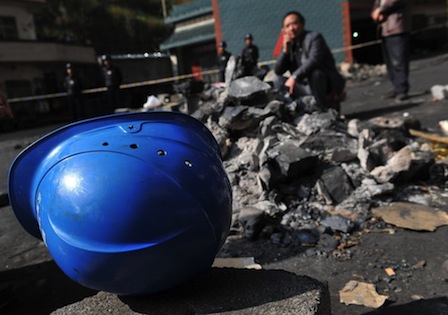 A planned detonation ignited trapped gas in a coal mine in eastern Yunnan last week. The explosion killed 17 workers and has led to the arrest of two mine officials, Reuters is reporting.

The accident occurred at a coal mine in Fuyuan County (富源县) on December 5. The blast ignited unventilated flammable gas in a mine tunnel where 66 people were working. Sixteen miners were killed instantly and one died at a nearby hospital. Six others were injured. No explanation has been given as to why workers were in the mine at the time of the detonation.

The accident occurred after mine manager Zhang Youwei (张有为) gave orders to open a sealed mine shaft and use explosives to clear the way to a new coal seam. The area had previously been off limits due to fears of a gas build-up.

Zhang and Huangnihezhen Mining Company (黄泥河镇上厂煤矿) head Chen Youlong (陈优龙) were arrested two days after the explosion. Eight officials from Fuyuan County, including the head of mine safety, were suspended Friday pending an investigation.

Families of those killed in the blast have received compensation payments from the mining company of 990,000 yuan (US$159,000) each. The mine, which began production in 2004, has been closed indefinitely by the government due to ongoing safety concerns.

China is the world's largest consumer of coal and generates the majority of its electricity from coal-fired power plants. Beijing has cracked down on illegal and unsafe mines during the past decade but China still leads the world in mining-related deaths.

GK still has not learned to give specific information when writing articles. Where in the world is FuYuan County? It would be nice if the writers did a little research and gave the specific location of this county. Is it Wenshan? Qujing? Where?

Fuyuan County is in Qujing, a prefecture-level city in far eastern Yunnan.