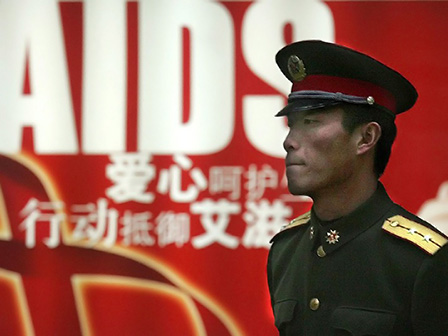 Less than a week before World AIDS Day, the Ministry of Health (MoH) has issued its annual report on the state of China's HIV/AIDS situation. Yunnan Province, although having less than four percent of the nation's total population, is home to more than 15 percent of all new cases of HIV, according to the newly-released government statistics.

Yunnan began to collect data on the pandemic in 1983 and this year the province topped 100,000 total cases. As of October 31, the province recorded 10,447 new cases along with 2,411 AIDS-related deaths. These numbers are up slightly when compared to a similar report issued last year.

Although case numbers were roughly the same, year-on-year demographic comparisons show the disease is most often contracted through sex. Last year 77.3 percent of all new HIV infections in the province were contracted through sexual intercourse. That number jumped to 80 percent this year, while intravenous-related cases dropped to 16.5 percent.

This year's data reveals that the disease continues to spread most quickly in the countryside. Individuals contracting the disease in rural communities made up 60 percent of all newly diagnosed patients.

Of the reported 36,000 people province-wide requiring antiretroviral treatment, 30,000 of them have access to government subsidized therapy. In 2012, 8.7 million yuan (US$1.4 million) was allocated by provincial officials for HIV/AIDS prevention and treatment in the counties and cities most affected by the disease.

The most recent infection numbers represent an almost complete inversion of historical statistics. When HIV/AIDS first appeared in Yunnan 30 years ago, it was spread almost entirely by intravenous drug users.

China's HIV/AIDS statistics are often criticized by international health organizations as being deflated or inaccurate. Current estimates from different groups around the world estimate the country's total number of cases could number as many as 1.5 million. The MoH reports that China now has 492,000 people living with HIV/AIDS.

Considering the countries it borders, it's not surprising.