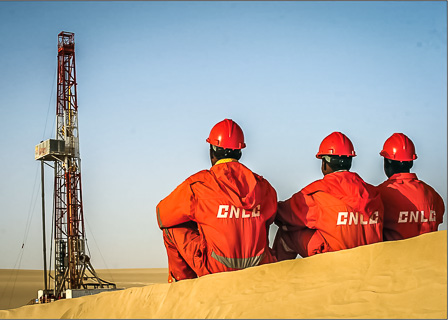 The International Energy Agency (IEA) estimates that China possesses shale gas reserves of up to 50 trillion cubic meters, more than double the proven reserves lying beneath the United States. What quantity of Chinese shale gas is recoverable remains unclear.

The US is now producing an estimated 23 percent of its fossil fuel energy from shale gas and sits on the second largest reserves in the world. In efforts to emulate US production, energy-hungry China is rapidly buying technology from and cooperating with overseas energy firms. The Chinese State Council has made exploitation of this newfound domestic resource a priority.

China's petrochemical industries are currently drilling exploratory wells in several parts of the country and have set up joint ventures with international companies in exchange for technology. Wells have already begun production in Yunnan's Zhaotong Prefecture, as well as in Sichuan Province near both Chongqing and Chengdu. 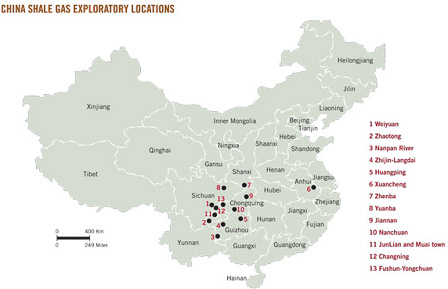 Although larger reserves of shale gas have been identified in both northeast and far western China, southwestern blocks are more attractive to developers because water resources are more plentiful.

Shale gas is extracted from the ground through a process called hydraulic fracturing, or fracking. Energy companies in the US — especially Halliburton — have developed a system where huge amounts of water and fracking fluids are pumped deep into the ground.

Wells are often several miles deep and used to create or increase faults in rock formations. The new cracks release previously nonexploitable pockets of natural gas that then rise to the surface for collection. 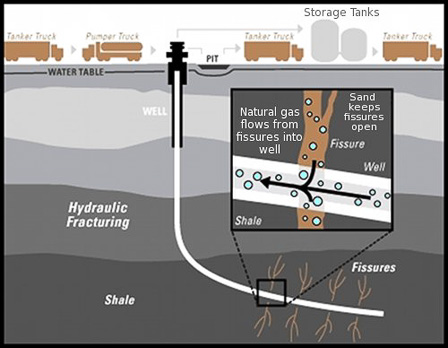 Because modern fracking is a relatively new form of drilling it is currently unregulated in China. The Ministry of Environmental Protection has said writing laws specific to shale gas extraction could take three to five years. Environmental activists argue this is too long.

Critics of the process argue that fracking irreversibly contaminates groundwater and eventually seeps out of the ground. In addition to the water necessary for hydraulic fracturing, dozens of carcinogenic and non-biodegradable chemicals are injected into wells. It is estimated that 30 percent of the chemicals remain in the ground after drilling is completed.

Another major concern for fracking opponents is that the process causes micro-earthquakes. Much of the fracking in the US is done in areas where earthquakes are relatively rare, such as in Texas and New England. This is not the case in Zhaotong, which was hit by two 5.7 magnitude earthquakes in September. Sichuan is also no stranger to violent tremors as the province straddles the Longmenshan Fault (龙门山断层). 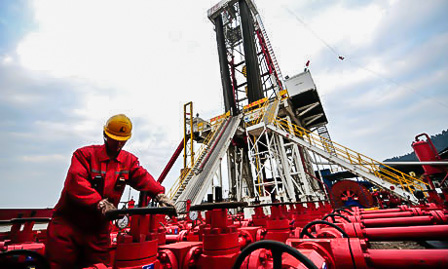 The United States Geological Survey published a report earlier this year linking fracking to increased micro-earthquake activity. The report found that an "unprecedented" increase in earthquakes in Middle America was definitely caused by humans. However, what activity led to more earthquakes is still unknown:

"It remains to be determined how [earthquakes] are related to either changes in extraction methodologies or the rate of oil and gas production."

Proponents of fracking in China point to the massive decrease in coal use in the US. In 2011 carbon dioxide emissions in the US dropped for the first time in decades. The world's largest consumer of energy eliminated 92 megatons of CO2 emissions largely by cutting the use of coal and accelerating the use of natural gas in energy production, according to an IEA study.

Editor's note: Special thanks to Colin Flahive for contributing research for this article.

there's an good documentary on fracking in the US called Gasland.

Luckily we have so much water to waste in Yunnan...

Like if China needs more pollution in their waters. All for the mighty RMB.

Hate to say it, but i think environmental issues are going to take a back seat on this one, the demand for oil now will override the long term environmental issues. Oil fracking is a more expensive process for extracting oil and the only hope to slow or stop it would be for world oil prices to drop and make it cost prohibitive. With the large oil reserves in the USA and the opportunity to be oil independent in the future I do not see Obama or future leaders in the usa allowing oil prices to drop enough to stop this process. Oil fracking has turned the state of North Dakota from a bust state not that long ago into a boom state with low taxes and one of the lowest umemployment rates in the world. In several cities in the boom area Walmart, Sears, Mcdonalds, etc. are paying 15 usd an hour which is double most other areas of the usa. It is a great place for anyone to get a job if you are lucky enough to find a place to live.

whatever you do, don't turn on your kitchen faucet and light a match! ha ha ha!

3 to 5 years to set up rules, regulations and laws on shale gas extraction?! And here I thought that one of the pros of having a government like China's (cough, cough, haaaark, spit!) was that the decision-making process was speedy when needed.

And yes, we all know TallAm has a point unfortunately. Increased consumption pared with limited fossil fuel reserves make it inevitable that every single extractable deposit will be done with eventually, and as time passes, fewer and fewer environmental concerns will be addressed.

It is natural to fear the unknown and always good to be questioning new technologies. With little history to evaluate the results in this area, fracking could be potentially hazardous though it is less likely to be any scarier then the coal mining it will replace. Until more studies and drilling are done it will be difficult to know for sure. Earthquake hazards maybe more difficult to evaluate, the same as trying to evaluate the earthquake hazards with all the dams built in the Yunnan and Sichuan areas, these too are said to alter the weight distribution and change stress along the fault lines. Conditions are so variable that in one area your fine and in another you're not. This area of China is deemed more difficult to drill due to the rough terrain, fractured nature of rock and of course faulting. I've visited the area were some of the drilling for oil and shale gas will take place, though not as rugged as many places here it is still difficult. The road I drove had detours around rock slides from the May 12, 2008 quake that took near 100,000 lives. Visit the USGS (earthquake.usgs.gov/earthquakes/map/) for real-time and historic earthquake information.

The horizontal oil wells I have seen proposed for Sichuan are deep, close to those in North Dakota (ND). The wells in ND are deep going to 9-10,000 feet (3-3.33 meters) before turning horizontal, the horizontal section being nearly two miles long or 8,000 to 10,000 feet. This is the section that is hydraulically fracked using large string of compressors to create the pressure to fracture the rock formations; historically they used directed explosive charges to frac the pay zone pipe and rock.

As you get closer to the surface the risk of gas reaching the surface goes up. In coalbed methane (CBM) drilling the wells can often be shallower, generally 500 to 1,500 feet deep. These are often fracked under much less pressure. I saw one well (out of maybe 500) were the gas went into an adjacent water well, but the rancher said when the water well was drilled he could light it, with the CBM drilling he might be able to produce commercial volumes from his water well. More often was the case where one CBM well would affect an adjacent CBM well raising pressures and releasing gas to the surface in a well up to a quarter mile away.

The water issues with fracking at depth are more about using up the valuable water resource, in kind the frac sand is going to be valuable for this work. Minnesota has experience a frac sand boom, mining it has hazards that include silicosis from inhalation. Silicosis and other inhalation hazards also exist in the Zhaotong area coal mines, these coals contain a higher than usual silica content from volcanic activity during the coal formation.

All things considered the development of shale gas in the Sichuan and Yunnan area will continue and if it has the effect it has had in the US it will depress the demand for coal to produce all that electric power to make our cell phones, factories, electric bikes, computers, and rice makers work. So it will over all be cleaner, but still and unknown since it has never been done on this scale. Pipelines are essential for natural gas production unless they opt for the more expensive liquefying the gas for rail or truck transport but all have hazards. I have cleaned up many in the past.

Does Gas Fracking Cause Earthquakes?

While much of the concern about fracking relates to its impact on potable water supplies, other impacts include air pollution, wastewater disposal, industrialization of farm land, increased carbon dioxide emissions, and destruction of wildlife habitat from multi-pad fracking sites that can be as large as five square acres.

But there's another impact that is less well known.

Official written comments submitted to the EPA by the environmental group Natural Resources Defense Council asked that the EPA also "look at the potential for fracking to cause earthquakes." In 2009, the Wall Street Journal (June 12) called earthquakes "the natural gas industry's big fracking problem."

All the problems you list are found with coal mining and burning coal. The multi-pad is for drilling multiple wells maybe up to eight, thus eliminating 4 or more pads and the roads and pipelines to connect them. Mining, petroleum drilling, nuclear and hydro-electric all have environmental issues, finding what is appropriate is the task. Of course natural gas is considered cleaner than coal and has a lesser impact than burning coal and warming the planet more.

Does fracking cause earthquakes? I guess you could say if it did it is such a slight risk compared to the total number of quakes that occur but it is unknown as are the effects of mining and hydro-electric projects. It should be considered as EPA stated, though it will be the Chinese that make that call.

I think the issues are related to a lack of mitigation to the environmental impacts of fracking. The licences were rushed through, by the govt. to avoid the new regulations about to be issued, by the govt.

The other industries mentioned are problematic, but there are regulations and controls in place. Even if not rigorously enforced.

Unfortunately, the map provided with the locations of fracking is very small and I can not make out the names of the locations. However, one can see that they are in the SE of Sichuan.

I will take some time later to make out the exact locations and provide the names of the prefectures and counties they are located in.