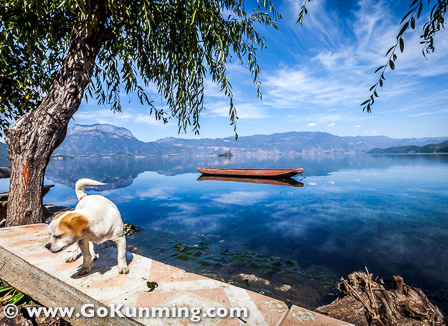 Kunming Changshui International is China's fourth largest airport and went from design to operation in just five years. The Kunming subway system has seen its share of setbacks but is still being built at a speed that would make other cities jealous.

It is somewhat surprising then to find an infrastructure project in Yunnan that has gone virtually nowhere in three years. But that is apparently the case with Lugu Lake Airport (泸沽湖飞机场). Construction on the airport was announced three years ago but confusingly did not actually begin in earnest until this week, according to a China Daily report.

A 14-kilometer stretch of road to the construction site was completed last year — two months before the project received official approval from Beijing. Land for a 3,400 meter runway has been cleared but no permanent facilities have been completed.

Construction of the airport has been impeded by the region's high elevation and varying weather conditions. The area is also prone to mudslides and was hit by a magnitude 5.7 earthquake in June.

Lugu Lake lies 200 kilometers northeast of Lijiang and stradles the border with Sichuan. It is popular with domestic tourists for its mountain and lake scenery as well as for the local Mosuo (摩梭) people. The Mosuo are designated as a subgroup of the Naxi (纳西族) and number around 40,000.

The Musuo are best known for their matriarchal society – a label which is not fully accurate. Mosuo women make business decisions and property is passed down along the female line, but men hold political power, which prevents the Mosuo from being classified as a pure matriarchal society.

The Lugu airport is now scheduled to be finished in 2013 at a total cost of 1.2 billion yuan (US$193 million) — up 400 million yuan from initial estimates. When operational, it is expected to handle 450,000 visitors a year and become part of a regional air hub with Kunming acting as the center.

Crossing my fingers they never get it finished.