By Patrick Scally in Features on November 6, 2012 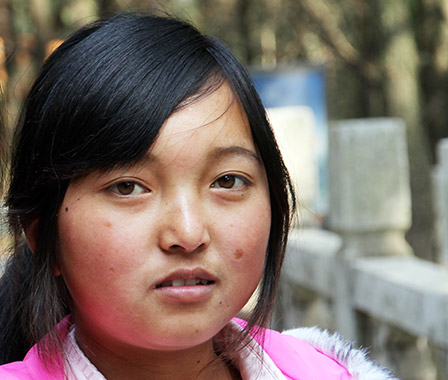 Three weeks ago Salvador's Coffee House announced that one of their employees, Li Ping (李萍), was suffering from renal failure. Her prognosis is daunting — a lifetime of treatment and hospital visits. In addition to taking up a tremendous amount of Li Ping's emotional and physical energy, the treatments are also extremely expensive.

Li Ping, who is just 17-years old, will need to get dialysis treatments twice a week for the rest of her life. She may, in the future, become healthy enough to receive a kidney transplant, but it is not currently an option. The condition of her kidneys is exacerbated by an enlarged heart caused by anemia.

After several weeks of treatment in Kunming, Li Ping has returned to her village outside of Lincang. Li Ping will now have to travel two hours each way to a hospital capable of treating her complicated set of ailments. This trip requires her to walk, take a motorcycle and finally board a bus.

Salvador's has set the conservative but still immense goal of raising 150,000 yuan (US$24,000) to be spent on continuing care for Li Ping over the next two years. In two years she will become eligible to receive insurance which will greatly decrease her medical costs.

It will be difficult for Li Ping to work consistently for the rest of her life. The goal of raising 150,000 yuan is also an attempt to supplement her financially day-to-day. To further her cause, two fundraisers have been organized to raise additional money.

The first of these will be a trivia competition held at Slice of Heaven on November 10. The quiz will begin at 8pm. Prospective teams should contact Barbara at 15887253680 to make arrangements as space is limited. Awards will include meal vouchers, wine and beer and other consolation prizes. Entry to the quiz is 50 yuan per person.

The second event is a benefit concert on November 18 at Wenlin Momento. Five bands will perform, including Badou, Funk Assembly, Lao Han's Reggae Band, Scotch on the Rocks and War Whores.

Special guest performer DJ Xiao Kris will make an appearance as well. Because the next day is a working day, the show will begin promptly at 7:30pm. Tickets cost 30 yuan and can be purchased in advance at Salvador's.

All proceeds from both events will be donated to Li Ping. GoKunming, Salvador's and Li Ping would like to thank everyone who has already made a donation. We also encourage those who can afford it to join these events and help out a truly worthwhile cause.

Editor's note: In an effort to help with Li Ping's medical bills, GoKunming will extend our banner promotion period. Get our "Super Banner" and we will donate half the proceeds to Li Ping.

I think that you guys should contact the media here in Kunming. K3 or k6 and maybe you'll get more money raised for her. Wishing her all the best.

I'm impressed that over 10,000 USD have already been collected in such a short while. I'm also happily surprised at GoKunming's continued efforts to support this cause. Now those last 14,000 can't be such a problem, can they?

Hopefully enough money can also be raised in the future for her eventual kidney transplant.

The outpouring of support continues to amaze. So far we have raised more than 70,000 rmb, and the donations continue. Thank you to everyone who has helped out, and a special thanks to Barbara for organizing tonight's fundraising quiz. It was both very successful and good fun, plus she made some amazing pavlova. Liping has started dialysis and has returned from what was really the edge of death to having a chance at a relatively normal life. And that would not have been possible without the generosity of both the local and international communities. On behalf of Liping and the rest of the Salvador's crew, thank you so much for your support.

Combined, the two fundraisers raised more than 21,000 yuan. A heartfelt thanks to everyone who participated and donated from GoKunming, Salvador's and Slice of Heaven. You are amazing Kunming.

Awesome night. Thanks to John and Cass for their hard work. Thanks to all the ticket sellers and to Moondog for getting those tickets out. Thanks to the amazing musicians we are lucky to have in this town. And thanks to all of you who been so supportive of Liping. The world needs more of this.

Dashan Yunnan Spring Water has donated 7000 bottles of water for Liping's kidney treatments. The water is now available by donation at Salvador's, Slice of Heaven and O'Reilly's. This promotion has already raised an additional 13,000 RMB to help pay for Liping's medical costs.