Caring for Yunnan's elderly in the one-child era 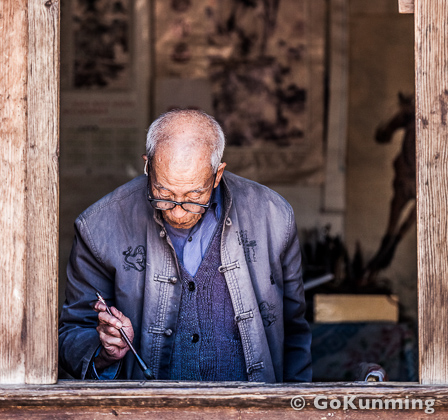 Yesterday China celebrated the Double Ninth Festival (重阳节), which falls on the ninth day of the ninth lunar month. Traditionally people drink chrysanthemum tea and climb mountains and hills. Since 1989 people have also celebrated this day as Senior's Day.

Seniors are a rapidly growing demographic in Yunnan and how to care for them is a growing concern for citizens and officials alike. The province has 5.9 million people over age 60, or roughly eight percent of the population. Many of them are poor or indigent and in need of expensive health care. The number of retired people in Yunnan is expected to double in the next two decades, Yunnan Net is reporting.

In an effort to address this situation, the Yunnan government has earmarked one billion yuan (US$160 million) for retiree programs over the next three years. The announcement was made to coincide with Senior's Day and included provisions for increasing the number of beds available in public nursing homes across the province to 180,000.

There are currently eight nursing home beds for every 1,000 elderly people in Yunnan, according to statistics from the Bureau of Civil Affairs. The one billion yuan allocated for elder care looks to raise that number to 30 beds per 1,000 retirees by 2015.

Additionally, money will be used to upgrade existing care facilities and the construction of new ones. The money will also fund salaries for the workers needed to staff new nursing homes.

An assortment of issues has led to the current predicament surrounding how to help Yunnan's quickly aging population. Mandatory retirement ages, the rising cost of living and China's one-child policy have combined to create a pressing issue.

Nationwide mandatory retirement for women occurs at age 55, and for men at 60. For the first 15 years a person works they or their company must pay eight percent of their monthly income into a pension system (养老保险). Once someone has worked for 15 years, they have the option to opt out of their payments. Those who stay in the system longer receive higher payments upon retirement.

For those who earn very little or opt out of the pension system early, retirement benefits are often paltry sums. Yunnan Net reports that for a Kunming retiree to live "comfortably" from 60 to 80 they should save an absurd 1.5 million yuan (US$240,000) to supplement their pension.

The one-child policy, while limiting China's population growth, has had the perhaps unintended consequence of upending centuries of Chinese filial tradition. Aging parents and grandparents could traditionally depend on their children to care for them in their old age.

For the first time in the history of the Chinese family, this generation of retirees will only have one child to provide for them. It remains to be seen if this new strategy of inserting nursing homes into a culture that was once solely family-dependent will work.

The days of your child taking care of you in your old age is pretty much over. A lot of children move away and have their own families to take care. They need to go where the jobs and opportunities are. Many times it's not in the cities they were raised in. Sadly, I feel that China is becoming more and more like the west in which aging parents are put in nursing home left to die.

Liumingke1234, why is it so sad that people want to live their own lives. Children do not ask to be born. It is a great conceit of parents to expect to be raised by their own parents and then to be taken care of by their children. Each generation is responsible for the future, not for the past.

If you are elderly and can't take care of yourself or haven't made arrangements to be taken care of, the only fault is your own (barring any unforeseen circumstances). We all know that we are to going to age and at some point become feeble. Why is it our children's responsibility to take care of us?

I ask this as a childless, 56 year old, who is an only child.

No one is ask to be born into this world and yet here we are. What's sad is we as a society are losing compassion and respect not only to our own parents but to our fellow human being. I agree that no person should bring a child into this world with the expectation to be 'taken care of' in their old age. What's sad is the way some children treat their parents worse than animals.

From your eloquence it seems that you are a native English speaker but from your sentiments is feels as if you are a local. As an American, we don't feel putting parents in a nursing home is a bad thing. We cherish our freedom and independence; that include when I get old I get too choose how I want to live out my days, which nursing home I want to go to and how I will be taken care of.

With regards to compassion, in what period of history did we have more compassion for other human beings? Was it during the Crusades when people were killed just for believing in the wrong god? Was it during the Industrial revolution when humans were treated like machine to be used up and thrown away? Or was it during the great depression when there were no unions protecting worker's rights, no safety net; if you get sick the government lets you wallow in your own filth until you die?

The problem is not children not wanting to take care of their parents, it's the new reality in China that in order to improve your livelihood and to ensure the future of your kids, you need to get out of the countryside and move into the city. Who's to say they can't work for a better life and instead should stay home to take care of their parents?

While I agree that some children treat their parents terribly, this has nothing to do with the greater trend of an aging population. Some people are just bad people, they didn't treat their parents badly solely because they are old and have become an nuisance. I also think it is sad that parents make their kids study for 15 hours a day but that has nothing to do with the main point of the article. On a side note, if the child treats their parents like animals, should the parents bare some responsibility? After all, it was their upbringing that at least partially contributed to such behavior.

No one is asked to be born? Terribly sorry, but that argument just doesn't hold water. Why? Because one is hard pressed to find large swaths of people committing suicide because they resent being coerced into existence. In fact, many of the people I have meet seem to enjoy life, and the human species as a whole seems rather loathe to relinquish it. Quite a gift our parents have given us, wouldn't you say?

As for the "If you are elderly and can't take care of yourself or haven't made arrangements to be taken care of, the only fault is your own." claim? Try telling that to people who have paid, or will pay, for the education of their children (or, as some might put it, shouldering their "responsibly to the future"). For many people the choice they are presented with in this day and age is either saving for retirement, or ensuring that their children have a good education. Of course one could say that they should take "responsibility for the future" and actively seek to reverse the current trend of rising eduction prices, right? After all, most working parents have plenty of free time to devote to political and social activism...

Anyone with children (my son is two) knows how much of themselves even a mediocre parent (like me) puts into rearing their children. This doesn't mean that the children of the elderly should function as indentured servants, but I think most people would agree that children certainly owe them something, and that something is definitely more than the a quick breeze-through visit to a dreary nursing home during the holidays. A mixture of filial responsibility and well-managed social safety nets seem the most reasonable response, and hopefully China will find the right balance that works well for them. The people who are already in, or soon to be reaching, retirement age in China have by and large lived pretty awful lives and despite what some might say, it really hasn't been their fault.

MiZixia, you may have misunderstood the part about not choosing to be born. I didn't say anything about not enjoying life or that people would commit suicide en masse. Perhaps that is your own perspective on life. What I did say is that each generation chooses to bring life into this world. Children do not make that choice for themselves. Children owe their parents nothing. That is true for every generation.

We very much appreciate the article by Patrick Scally. We are caregivers in Hawaii. We have a very large Chinese population and our local community looks at the global community as we are all facing the need for appropriate elder care. We shared this article on our blog at healthhomecareservices.com/senior-care-news-from-china/ Please feel free to visit and comment. We will continue to visit GoKunming for good information to share with our Hawaii community. Thank you!