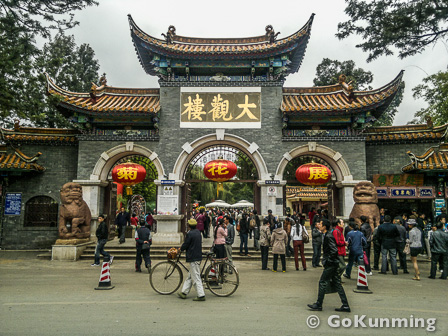 There are many smaller parks in the city, including some that are quite charming. But when looking for a truly massive urban green space that can accommodate thousands of visitors simultaneously while still not feeling crowded, there is only one option. That place is Daguan Park (大观公园), or "Grand View Park". 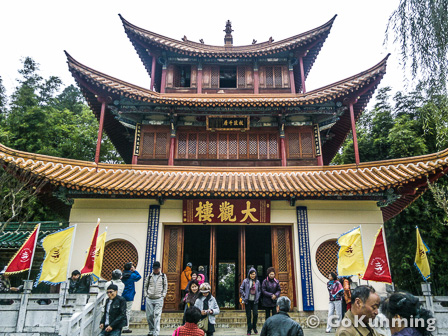 The park itself is centered around Daguanlou (大观楼), a three-storey tower designed to give panoramic views of the manicured park grounds, Dianchi Lake and Xishan. There is a two yuan fee for climbing to the second and third floors but the views from the balconies are quite nice.

Construction of Daguanlou was completed in the 1690s. Perhaps more famous than the view provided by the pavilion is the poem carved into the gateposts of the south-facing door. It is comprised of a series of rhyming couplets composed by the poet Sun Ranweng (孙髯翁) and is purportedly the longest series of its kind ever composed in China.

The "Long Couplet" (长联) was written during the Qing Dynasty and is considered to be one of Yunnan's most important pieces of cultural heritage.

The poem is divided into three sections. The first describes the scenery around the pavilion and then moves on to a lengthy explanation of Yunnan's history before ending with a meditation on the Buddhist concept of nirvana.

According to local legend, Sun carved his poem into the pillars of the pavilion himself. A life-sized statue of Sun, who reputedly was an incredibly accurate fortune-teller, sits just outside the pavilion, next to a wishing well.

The buildings adjoining Daguanlou are often congregating places for people to play Chinese chess, majiang or cards. Currently three of the buildings house a hundred year photo retrospective of Dianchi Lake called "A Clear Dianchi, A Prosperous Kunming" (滇池清,昆明兴). The exhibit of more than 100 landscape photos is free to visitors. 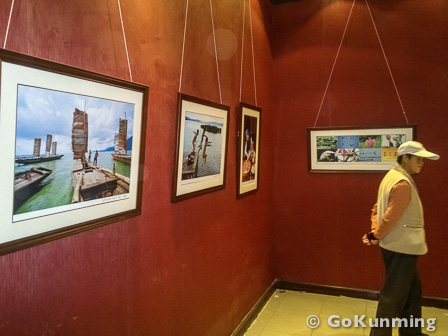 Many of the photographs show scenes of Dianchi Lake in its healthier days — often of people swimming in clear blue water in times before algae-blooms made such recreation impossible. Other photos show massive storm systems boiling over the city or beautiful sunsets over Kunming's Xishan.

Perhaps the most intriguing photo of the display is a 2008 snapshot of the lake shore dusted with snow, Xishan looming in the background shrouded in white. The exhibit, which is well worth the park's price of admission, runs until November 13. 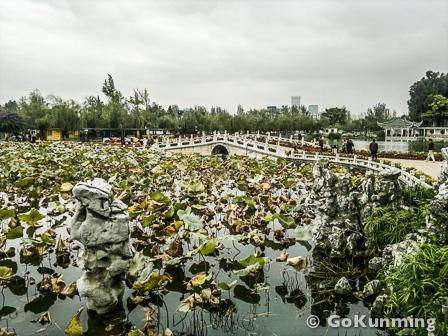 Daguan has everything one would expect from a Chinese park — paddle boats on the ponds, groups of elderly people playing games or instruments, and golf cart taxis for those unwilling or unable to walk. It also contains well-manicured grounds with dozens of species of trees, including weeping willows sagging over the park's lagoons.

Sprinkled along the park's several kilometers of paths are statues and sculptures of varying styles and influences. Some paths lead to rock gardens or squares overlooking ponds full of lotus. Others lead quietly to small pavilions or benches surrounded by ornamental plants. 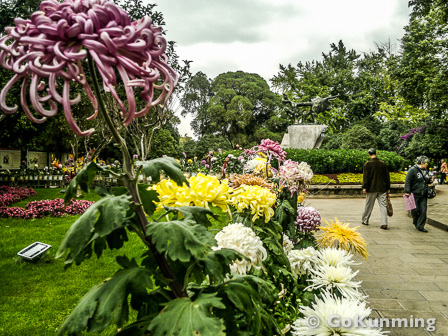 The park is decorated several times a year with seasonal flowers. When we were there the flowers of choice were chrysanthemums. More than 50,000 of the plants were festooned across the grounds. Photographers armed with laughably elaborate camera lenses were jockeying for the best shots despite the general lack of sunlight.

To the right of the main entrance is a small theater billing itself as providing a 4D experience. The screen wraps around the viewing area and the seats look like they have motorized movement. When we visited the park no one was working in the ticket office but helpful fruit vendors outside told us tickets were 30 yuan and movies usually run for 15 minutes. 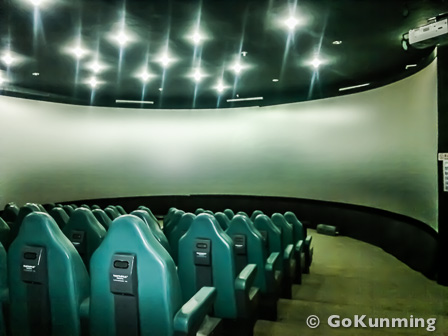 There are numerous docks on the edges of the park where tourists can buy boat tickets for lake cruises. Prices vary depending on the size and speed of the boat as well as the destination and range in price from 80-100 yuan. There are several options for people who want to cruise around the lake for an hour or two and return to the same pier. In addition, there are one-way boats to Haigeng Park.

We visited on a weekday and as the crowds were thin there were very few dining options. We did see the almost-mandatory row of mixian food stalls and plenty of snacks, but the other restaurants were mostly closed.

The park is busiest on weekends and holidays and during these times, it can fill up quickly. Over the recently concluded National Day holiday the park attracted 130,000 visitors. If you plan on visiting on a weekday, we highly recommend packing a picnic. 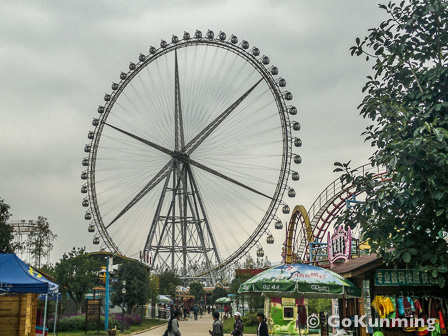 Towering above everything in the park is the 90-meter Ferris wheel. When entering the city from the west, it is Kunming's first and most unmistakable man-made landmark. Giant, silent and ponderously slow, the wheel takes 30 minutes to complete one revolution. Upon reaching the top, passengers are provided with some of the most spectacular views of Kunming available in the city. Tickets for the ride cost 30 yuan.

Littered around the Ferris wheel are several other rides. Some are well-maintained and routinely in operation. Three roller coasters, small, medium and large, are the biggest attractions and all offer riders the chance to hurtle upside down, even if just for a moment. 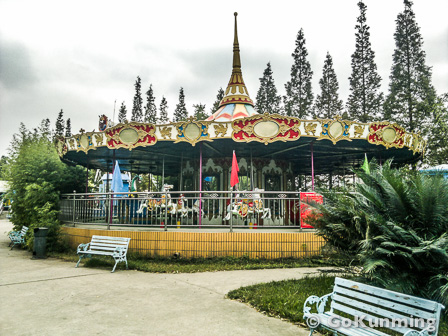 Daguan has at least five carousels although only the two-storey one was in operation the day we visited. There are also patriotic bumper cars sporting US flag and Statue of Liberty motifs, as well as several revolving rides.

One ride we saw was so covered in drying laundry and rust that we were unable to tell what it used to be. Admission to the park does not include entry to any of the various attractions or access to the haunted house located underneath the Ferris wheel.

Tickets for the smallest rides are 10 yuan and prices max out at 50 for the largest roller-coaster. Photographs of you enjoying, or not enjoying, your experience are available for 10 yuan.

THe main gate of Daguan Park is located at the terminus of Daguan Road. The park can be reached via bus lines 22, 100, 104 and 183. A taxi to the park entrance from the Green Lake area should cost roughly 15 yuan. The park is open daily from 8:30am until 6pm (later during special promotions) and tickets cost 20 yuan per person.

The Daguan couplet text is so good, it would deserve an entry itself. About a year ago, there was some kind of competition concerning the best English translation of it. Whatever happened to that?

It makes hearts of leather shiver, when old Sun Ranweng is melancholically looking at Yunnans prosperious times, seeing red lanterns on the lake of heaven (Tian/Dian).

Now, what would he say about the destruction of Yunnan today? He probably would jump in the lake like Qu Yuan.

Yes, I'm a fan of DaGuan Park too. There's such a lot to see and do. Great for people watching.

There will be a "cultural festival" in Daguan Park during the October holidays: www.gokunming.com/[...]

there will be a 'cultural' festival ;-)

The posters include someone playing bagpipes. Take earplugs!