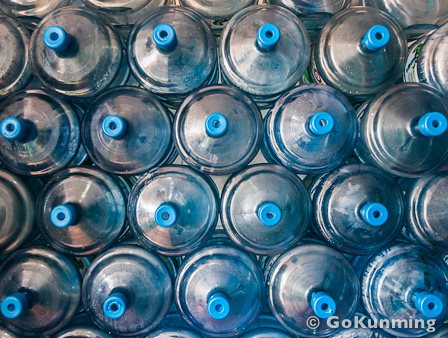 Yunnan has been largely immune to the economic slowdown facing the rest of the country. However, recent figures released by the government show that the consumer price index in Yunnan has risen by 17 percent compared with the same time last year. In an ominous sign that prices for Kunming residents may rise further, one of the city's largest water delivery companies is raising its prices 50 percent.

Beginning October 1, Yunnan Shanquan (云南山泉) will tack a five yuan fee onto the price of every 19 liter container of water it delivers, making each barrel 15 yuan, Life newspaper is reporting.

A company spokesman for Yunnan Shanquan, Gao Qing (高箐), told Life that recent internal audits by the company revealed delivering a single unit of water costs almost exactly what Yunnan Shanquan charges its customers. Water treatment and bottling alone cost the company between four and five yuan, according to Gao.

Transportation expenses to ship water from treatment facilities to distribution outlets averages 2.5 to 3.5 yuan per barrel. The company must also pay staff and rent distribution centers throughout Yunnan. All told, these outlays total between 9 and 10 yuan per barrel of water. Gao said the price increase is necessary to keep the company solvent.

GoKunming contacted Yunnan Shanquan to inquire about customers who have purchased 10 yuan water vouchers in advance. We were told the company will continue to sell 10 yuan tickets until October 1, when the price change goes into effect. They will honor all 10 yuan vouchers purchased before National Day. Customers looking to avoid the new fee by picking water up themselves will still have to pay an extra two yuan for each container.

Yunnan Shanquan competitor Shilin Tianwaitian (石林天外天 ) also expects to raise prices in the near future. Company spokesman Qian Hao (钱昊) told Life newspaper that salaries for delivery drivers are rising due to the demanding nature of the job. He said prices will rise to allay salary increases but the company has yet to decide on a specific number.

GoKunming also spoke with Zhenmin (珍茗) water company and were told price increases for water delivery were not imminent and that customers would be informed of any added fees before they went into effect.

It is only a matter of time before others follow.

To be honest, I was amazed that they could do it for 10rmb.

Assuming it does indeed cost them 10rmb. per bottle, a 50% profit margin seems like quite a lot.

50% margin sounds like a lot, but actually it isn't for this type of industry. The margins on some of things you buy can be as high as 300%.

One reason I live in China is to get away from relatives who do nothing but whine about prices.