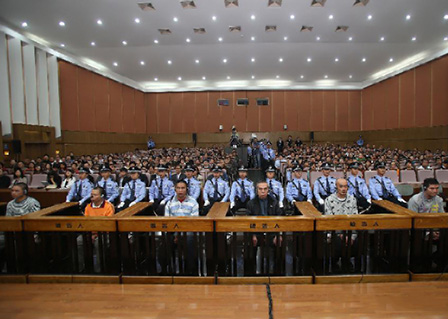 Today the trial against alleged Mekong River drug lord Naw Kham begins in Kunming. He is charged with murder, drug trafficking, kidnapping and the hijacking of ships. Naw Kham faces the death penalty if convicted, China Daily is reporting.

The trial appears to mark the end of what Chinese authorities are characterizing as Naw Kham's nearly two-decade run as one of the most feared drug lords in the Golden Triangle. According to quotes from Chinese police officials obtained by China Daily, the inquiry was "the most complicated criminal case Chinese police have ever handled."

The complexity of the case stems from its international nature. Naw Kham is a Burmese national, but was apprehended in Laos for the crime of killing 13 Chinese sailors in Thai waters. Those murders were carried out in October of 2011, and were allegedly revenge killings orchestrated by Naw Kham in retaliation for an earlier raid on one of his drug warehouses.

The killings strained relations between China and its Southeast Asian neighbors. In the wake of the Chinese sailors' murders, shipping traffic on the Mekong River near the Chinese, Lao and Burmese borders was suspended.

However, instead of causing an international row, the four countries involved cooperated in setting up joint patrols along the Mekong to protect commercial traffic.

The trial, held in the Intermediate Court of Kunming, will feature testimony from Chinese, Thai and Lao authorities involved in the investigation. Naw Kham stands accused with five of his associates, all charged with similar crimes.

Is he being charged with commiting any crimes in China?

Seems strange he wasn't tried in the country he was caught or where he killed those sailors.

@Yuantongsi:
After considerable discussion between Laos, Myanmar, Thailand and China, it was decided that because the murder victims were Chinese nationals and the killings took place on Chinese vessels, the defendants should be tried in China.

Well, he killed only Chinese sailors and based on this story, he has had run-ins with the Chinese authorities before. Overall, it's good that this criminal has been brought to justice. Also, by being tried in China he will receive the punishment he deserves.

The Mekong River in the 2000s should be about tourism and trade, not murder, drug trafficking and mayhem. Those latter three things should firmly be entrenched as relics of the past.

Also, scally is correct about the reasons for Naw Kham being tried in China and logically Kunming, the closest major Chinese city to the area where the attacks occurred would be the best place to try him.

Incidentally, the 9 renegade Thai soldiers also implicated in the attacks will be tried in Thailand.

I think this is a very good start to grow the trade and tourism industry that centers on the Mekong river which flows through China and numerous South East Asian countries. Security and condition of the area is crucial to begin sustainable development to utilize this important backbone in this region.

"Although the incident happened overseas and all the suspects are foreigners, the fact that the victims are all Chinese and that the crime occurred on Chinese ships indicates that China has jurisdiction over the case."

a really unique case, and indeed maybe bending the one or other law?

article has some thoughts, but as always with TD take it with a huge rock of salt

When it comes to illegal drug trade the US's DEA has some power and jurisdiction within Canada, extraditing a Canadian citizen for selling pot seeds to Americans by mail.
In this article's case it's no surprise to have China wipe away any legal loopholes or lengthy delays the drug dealers would have benefited.

In America's past south american cartels played infinite games of hide and seek against the US laws, until the US gov said, enough..

Similar is the so called "war on terrorism" striping individuals of certain freedoms.

This clearly shows the lack of ethics. The suspects say something and the translator says something else. The suspect said he is suspected and arrested. but it was translated
that he was arrested for planning and involved in the killings. Don't know whether it is the local government officials or the CCTV that is responsible for making such unethical works. I don't know much about the case, but I know the language.

This is quite shameful, isn't it??

Maybe he had forgotten the script he had been told to read? (joking,,sort of)

It's also interesting that Burma and Lao agreed for the guy to be tried in China, but that Thailand did not let the Thais be tried out of Thailand. It seems China has different sway in different SEA nations.

Naw Kham and three associates were sentenced to death on November 6. Two others involved with the case received a reprieved death sentence and an eight-year prison sentence, respectively.