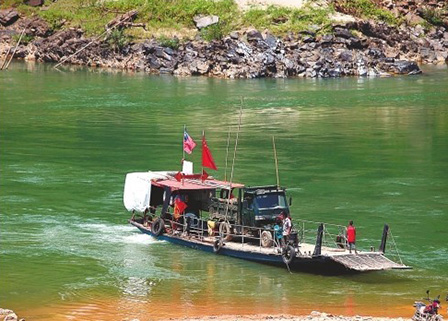 This weekend a ferry in Xishuangbanna on the rain-swollen Mekong River, called the Lancang River (澜沧江) in Chinese, capsized. Seventeen passengers, most of them children, are missing and presumed dead, Yunnan Net is reporting.

Several rivers In Yunnan are running more swiftly than usual and have become dangerous to navigate due to recent rains. Strong storms across southwest China have also been blamed for causing multiple mudslides in Yunnan and Sichuan.

In addition to the 25 people on board, the boat was reportedly overloaded with motorcycles and other cargo while it crossed the river. The ferryman was attempting to return to the Chinese side of the river when his boat was caught in the current and swept off course. It took on water and capsized.

Boats from both sides of the river were quickly dispatched and rescued eight people. The other 17 people were swept downstream and have not been found.

The two towns connected by the ferry, Mali village (马里村) in Myanmar and Guanleizhen (关累镇) on the Chinese side, use small ships to shuttle people and goods back and forth across the river. Chinese workers pay five yuan per voyage to go to work in Mali's rubber plantations. However, the majority of passengers riding the ferry are usually children from Myanmar.

More than one third of the 716 students at Guanleizhen's primary school are Burmese. They cross the river every week to attend classes on the Chinese side. The school, according to parents interviewed by Yunnan Net, has better facilities and more teachers than the school in Myanmar.

The children who disappeared when the boat sank were returning to school from a weekend spent with their families in Myanmar. Despite a 24-hour search, none of the missing have been recovered. Recue workers' hopes for finding survivors are diminishing due to low water temperatures and swift currents.

The story by Yunnan Net has been updated. As of Tuesday morning there are 14 people missing, nine of them schoolchildren. Initial reports said the ferry was carrying 25 passengers when it sank but that number has since been lowered to 23.

Very tragic event. But thanks for the article and background info. I didn't realize there were border ferries and Burmese kids would daily use them to go to school in China.