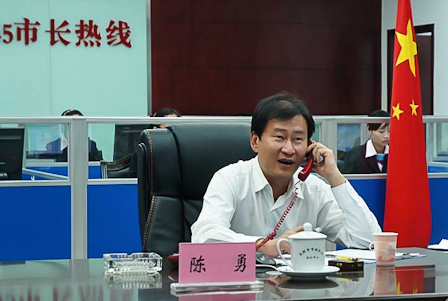 This morning from 9:30-11:00am Kunming deputy mayor Chen Yong (陈勇) personally answered questions on the city's Mayor Hotline. The questions Chen fielded were simultaneously posted alongside his answers on an internet site hosted by Yunnan Net.

The hotline, which can be reached by dialing 12345, was established June 28, 2000 as a way for regular citizens to voice complaints and ask questions of city leaders. Kunming's nine deputy mayors have a rotating schedule and work the phone once a month. Mayor Zhang Zulin (张祖林) also fielded questions on one occasion last year.

Questions were posted live on the internet anonymously under the name 'citizen'. Chen answered nine phone calls and seven online messages during the 90-minute session.

Many of the questions taken by Chen concerned construction projects around the Spring City. One person whose old residence was torn down and who had been relocated complained that the new apartment was smaller than promised and the construction was substandard and dangerous.

Chen's response was that he would get in contact with the housing division in charge of the caller's apartment block and begin an investigation. Other questions were more mundane.

One caller asked why a pile of sand left in the road for weeks by a construction crew near Baiyun Lu had yet to be cleaned up. Chen said he would look into it.

Another caller said he had lived in low-income housing supplemented by the government for two years but still had no paperwork proving he owned his apartment.

He explained to the deputy mayor that without the deed to his apartment he could not enroll his child in a nearby school. The caller also expressed exasperation that after two years his apartment complex still had no name and no street address for mail or other services.

Addressing the recently initiated road beautification project, an online participant asked if other urban renewal projects would have open hearings for nearby residents. They suggested people living near planned construction areas should be able to voice their concerns.

Chen answered that in the future citizen's groups would be invited to comment during the design phase of projects and would be given the opportunity to talk with relevant experts and developers.

The hotline has been growing in popularity since its inception more than ten years ago. Originally staffed by three operators, the hotline now has 16 people answering incoming calls from Kunming's district-specific hotlines as well as the 12345 number. The operators receive an average of 2,000 calls everyday.

I think this is a great idea. It makes you feel that someone is hearing your complaint although I know not all get resolve. Still, not bad.

We tried it recently to ask why our neighbourhood has had no running water after 6 months, despite the recent rains. They said it wasn't anything to do with them and hung up.

I believe the top boys in the Yunnan government are very progressive minded, perhaps stemming from links to the central government in Beijing. I'm glad to see not only development initiative but also outreach to the community.

I am glad to see more people get involved in their community and use this hotline. I was surprised to read that they receive 2000 calls each day.

I prefer to use the internet site - where I can receive a reply.

Woohoo! 24 hour running water resumed yesterday in my nieghbourhood after 6 months without. I put it down to the Deputy Mayor monitoring this article. Thank you DM and GoK. I can shower again....

Needless to say the "24 hour running water" promise lasted ...24 hours! We've been back to an hour a day ever since. Can't trust anybody in this town...