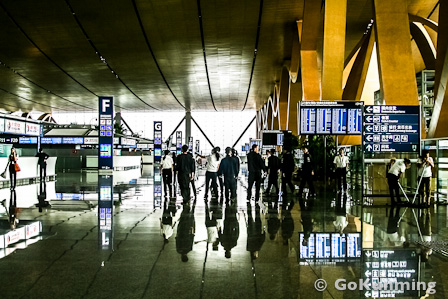 Kunming mayor Zhang Zulin's announcement in March that the city's new airport would open June 28 was simple and direct, if not lacking for details. 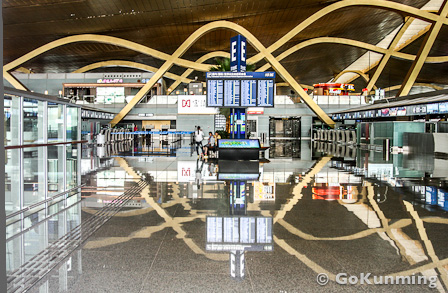 Beginning June 25 air traffic at Wujiaba Airport is scheduled to be gradually reduced to 60 percent of capacity. The final flights will leave the evening of June 27, with the ultimate flight leaving at 10pm.

The 33 planes scheduled to fly that night will travel to their destinations and then be grounded until they are cleared to fly return routes to the new airport the next morning. Changshui Airport will officially open June 28 and service outbound and inbound flights beginning at 8am.

Several routes that typically have layovers in Kunming will be changed to non-stop flights to give the newly opened airport a chance to iron out any wrinkles. Many small commuter flights will also be cancelled during this time. All cancelled or diverted flights are scheduled to resume on July 4. 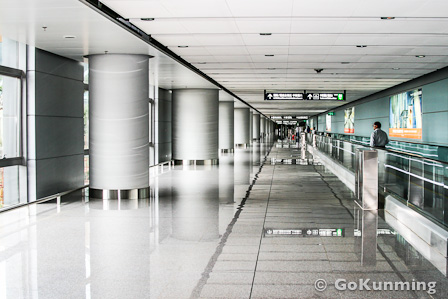 The 23 billion yuan (US$ 3.6 billion) project will open as the country's fourth largest airport and have an initial annual capacity of 38 million passengers and 950,000 tons of cargo.

The airport will service China, Europe and destinations throughout Asia. Changshui International is also expected to become a shipping hub connecting those regions to southwest China. With planned upgrades and expansion of existing runways, the airport is expected to handle 65 million passengers annually by the year 2040.

Travelers will embark on their journeys through 78 boarding gates connected by 50 moving walkways. In an attempt to avoid the shortcomings of Wujiaba, designers of Changshui Airport devoted much of the interior space to seating. The design also anticipated heavy traffic from privately owned vehicles and has three floors of underground parking. 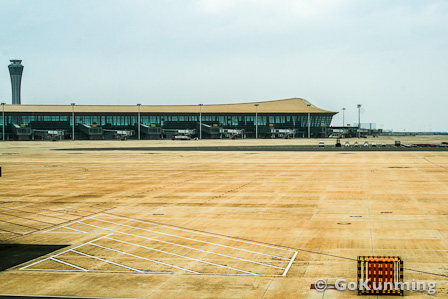 The new airport is 30 kilometers northeast of Kunming. For travelers without cars, taxis are always an option. A taxi ride from the city center will cost between 60 and 80 yuan.

The city has also established four shuttle bus lines which connect to the airport from different areas around Kunming. Shuttle #1 operates daily from 5am until 1am, while routes 2, 3 and 4 begin services at 7am and stop running at 1am. Tickets for express buses will initially cost 25 yuan per passenger.

People living in or traveling from the east of the city may want to experience the first operational section of Kunming's light rail system. The metro line will connect the East Bus Station (东部汽车客运站) to Changshui Airport. Trains are scheduled to be in service on June 28 and will leave for the airport every 25 minutes. Tickets will cost two yuan.

Any info regarding what will happen to the airport booking code for flights? Will it still be KMG who will Changshui get a new code?

I believe that it will keep the KMG designation (as the old airport will be shut down and the two will never operate concurrently).

When performing searches in various travel systems, I continue to see the KMG code being available, e.g. on cathay's site, or using KVSTool.

Wow, it's finally upon us. The new airport will finally open at the end of this month! Only thing is, I'd avoid non-essential travel in and out of this airport for the first couple of weeks since it will probably be more chaotic than usual and things may not go as planned (for example baggage claim may be unusually slow).

I like the statement "For travelers without cars, taxis are always an option." well of course they are. For starters, most people in Kunming still don't own a car despite all the cars on the roads these days. Secondly, even if you do have a car, who would drive to the airport in order to catch a flight and then park their car for the duration of their overseas or interprovincial stay there? I don't think long-term parking is well known in China so even a week's worth of parking could become very expensive and possibly more expensive than even in some western countries.

I am looking forward to the proposed direct Europe flights. Anyone have any idea about when these flights might begin and who which carriers will offer service (presumably Chinese carriers I would imagine)?

It used to be that US residents from the E. coast could book a flight to Vienna and then directly to Beijing before domestic services cut in. It was also less expensive than flying to LAX. to Guangzhou to Kunming and I loved Yunnan Airlines! Those were the days when an American could book thru a Chinese agency (in China, not in LA or Frisco).
Since it seems there are more EU and British citizen ex-pats in Kunming these days, has anyone taken such a route - or does such service from a EU or London actually exist/is planned??? Thanks -

Does anyone know if the transition is on time and the airports are actually switching service as of 6/28?

@aehren: there have been no reports in local media indicating a change of plans regarding the transition.

My wife flies to Shenzhen on 28th and has been told to use the new airport. So it seems the transition date is still correct.

Some airlines, particularly international ones like THAI have not updated their systems to reflect the new airport. At the beginning, starting tomorrow, I'm sure there will be some passengers that won't know about the change and will thus go to the wrong airport and miss their flights.

Flew out of the new airport on June 29, and just back today. All in all pretty good. Checked my bag a bit fearfully on June 29, but it turned up in Bkk and not Beijing!

Bkk and HK departures are from gates 70-75 ish, and there is a good coffee shop close to the gates (Starbucks also at the airport but far from the intl gates).

Return today was smooth, bags came quickly and LOTS of cabs if you want to travel back to the city that way. Hope this is helpful to folks.

Departing early morning from the new( I presume) airport to Guiyang like to stay in hotel NEAR or on the aiport premises. Any hotels in the area ?

If you mean hotel nr KMG, before you fly to Guiyang, then NO.

Stay in any hotel near ErHuan Lu. Taxi will be quick and easy in the early a.m.

There is a hotel right next to the new airport now, you can see it on the left as you drive up to the airport. I can't remember the name of it but it is definitely there and looks open. Actually it looks quite old already as do many buildings in China I suppose! Can anyone else confirm the name and contact?

I thought that was a room by the hour place.