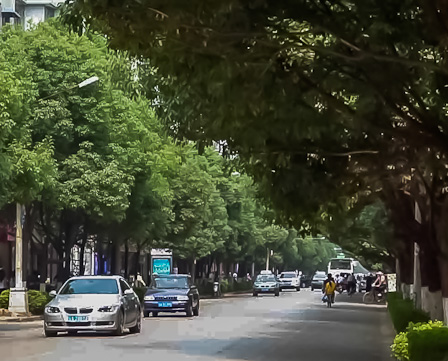 In an effort to beautify some of Kunming's largest thoroughfares, city officials have launched a 'Scenic Avenues' (景观大道) program. The construction project aims to make Kunming streets brighter, greener, cleaner and prettier, Shenghuo Xinbao is reporting.

Construction began at midnight on June 13 and is scheduled to be completed by September 30. Road upgrades will affect 22 streets across the city's five districts.

Multiple species of trees and shrubs will be planted along major streets so that even in winter there will be flowering plants in Kunming. The city government refers to this portion of the project as 'Four Seasons Blooming' (四时飞花).

Streets slated for beautification will be widened to accommodate Kunming's ever-growing number of cars. Sidewalks will be repaired and enlarged as well, and temporary or illegal buildings lining the roads will be demolished.

The project also calls for street lights to be upgraded and made uniform, power and telecommunication wires to be buried and sewage pipes to be replaced and enlarged.

Road crews will work daily from midnight until six in the morning. The schedule reflects officials' hopes that traffic congestion caused by construction can be held to a minimum during morning and evening rush hours.

In an effort to further ease traffic concerns, police will be on hand to direct vehicles away from snarled areas. Police in mobile command posts will monitor traffic via Kunming's ubiquitous street level cameras.

The plan appears to be a more concentrated throwback to 2008's modestly successful municipal plan to plant 800,000 trees in one year.

Major thoroughfares affected by the construction are Yieryi Dajie, Longquan Lu, Puji Lu, Xichang Lu, Caiyun Beilu, Xingyuan Lu, Dianchi Lu, the new airport expressway, and the entire first ring road. Side streets connected with these avenues will also be under construction. Complete financial details of the project have not been released.

It good to know that they are really trying to make Kunming more beautiful since I plan to be here for a while.

I hope it's more successful than the ridiculous "rip out everybody's window balconies" a year or two back, making Kunming flats now look more like prison cells.

Yeah, that's true. I really like the idea of more trees and bushes to keep the air a little cleaner.

Less dirty buses and other vehicles you mean. And more terraces on the sidewalks, along with more balconies!

I am looking forward to it.

@Heinz I agree. It would be nice if some streets were actually pedestrianised (WenLin Jie, for example).

Getting Kunming buses to use fuel instead of swill oil will go a long way to make the roads and surrounding areas 'cleaner'. Any number of trees will not deal with the pollution these badly maintained vehicles emit. More trees? Great, as long as they don't become assault courses for pedestrians on what are already, mostly, poorly designed pavements (aka: side walks - USA) (aka: parking space - drivers in Kunming).

Has anyone noticed any beauty yet? I see roads that have been broken for years left broken. I see perfectly OK kerbstones ripped up and different kerbstones laid down again. Are any roads getting bigger or smaller? I see no new trees? Has anywhere finished being beautified yet?