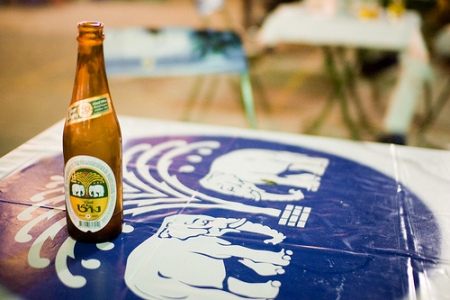 With an eye on Southeast Asia's emerging markets, food and drink giant Thai Beverage Plc (Thaibev) announced plans this week to invest between 100 and 200 million yuan (US$15-30 million) to enlarge its distillery and bottling operations in Yuxi (玉溪), Yunnan.

The company, which makes Chang beer and other beverages, plans to build new facilities next to its current factory in Yuxi, Bangkok Post is reporting. Construction will begin by the end of this year and is scheduled to be completed in 18 months.

The company is increasing production capacity in both Europe and Asia and is projecting to more than double its market valuation to US$500 million in the next three years.

There is huge potential for beer in Myanmar because it has only three beer brands, including Myanmar, Dragon and Mandalay, and all of them belong to the government.

Thaibev plans to expand its international marketing campaign into both Myanmar and Vietnam this year to capitalize on those countries' developing economies.

The Thai company may also be looking to take advantage of China's increasing demand for alcoholic drinks of all kinds. China's per capita alcohol consumption has grown 159 percent in the last 30 years and the country has become the fastest growing wine market in the world.

I wonder if the Chang will be 5+% like in Thailand... or watered down schwag like other Chinese beers?