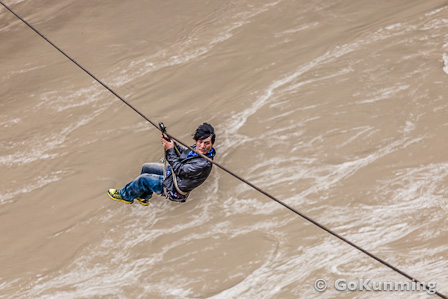 Averaging 2,000 meters from mountain ridge to riverbank over a stretch of around 315 kilometers (195 miles), the Nujiang canyon is second in depth only to Arizona's Grand Canyon. Meanwhile, it is so far away and difficult to get to that it gives visitors a rare glimpse into what much of Yunnan must have looked like before helter-skelter modern development transformed so much of the province.

The Nujiang (怒江), known as the Salween River after it flows out of Yunnan and into Myanmar, forms the westernmost of the protected Three Parallel Rivers, a UNESCO World Heritage Site. Before it passes into the south of Yunnan and eventually Myanmar (Burma), the "Angry" river flows through Nujiang Lisu Autonomous Prefecture.

Liuku (六库), the prefecture's seat, has the only road allowing motorized traffic when entering from Yunnan and differs from any other place in the gorge due to its dry, hot climate and level of development. Following the river north from here is a slow journey back in time, farther and farther away from modern civilization.

Last year GoKunming cycled from Nujiang's northernmost town of Bingzhongluo (丙中洛), over Fugong (福贡) and back down to Liuku. This year, inspired by Jim Goodman's recent book, Grand Canyon of the East, we returned to the Nujiang Valley and took a series of photographs around Lishadi (利沙底乡), about an hour north of Fugong. 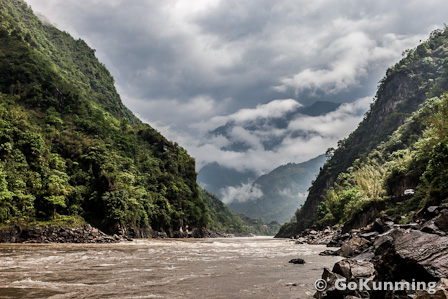 Despite Yunnan suffering from a major drought for the last three years, the Northern extend of the Nujiang Lisu Autonomous Area is quite often shrouded in clouds and fog. The road following the river eventually leads up to the remote valley of the Dulong people (独龙族), one of the wettest places in Asia. 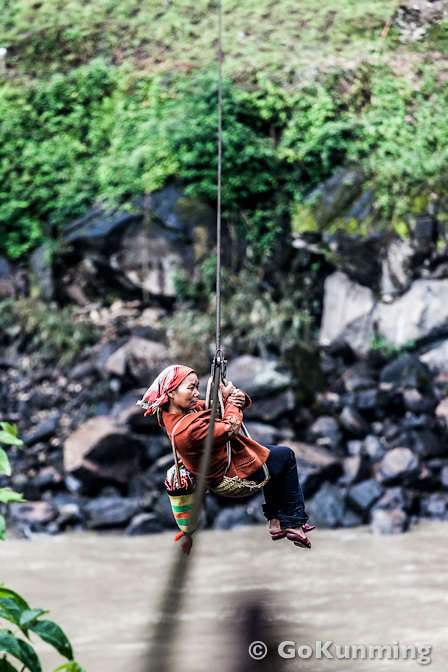 A local Lisu woman (傈僳族) crosses the river to visit the weekly market in nearby Lishadi. 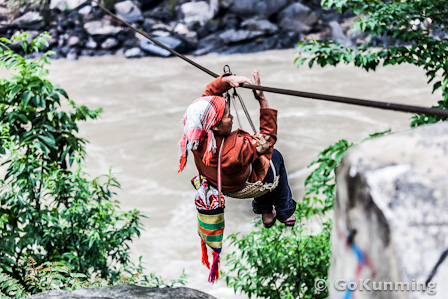 Before more modern suspension bridges were constructed, the primary means of crossing the river was by rope bridge (溜索). Recent efforts to replace the rope bridges, now made out of steel cables, have left only a few throughout the gorge – mainly for the sake of tourism. 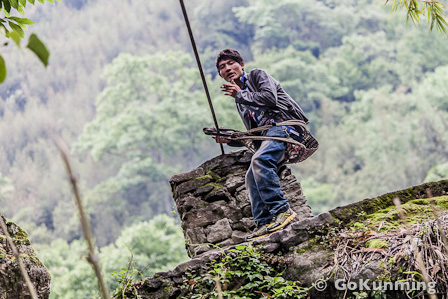 This particular rope bridge is also open for tourists. For around 50 yuan, paid to local people managing the crossing, the occasional tourist can experience a rather authentic way to fly down what in many places are called 'ziplines'. 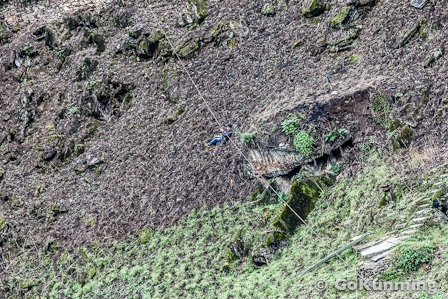 The distances covered are often long and typically start higher up the slope of the mountain so as to build up proper momentum in order to reach the other side. The required difference in altitude between start and finish limits the number of places suitable for setting up rope bridges, leaving many villages far from any connecting infrastructure. 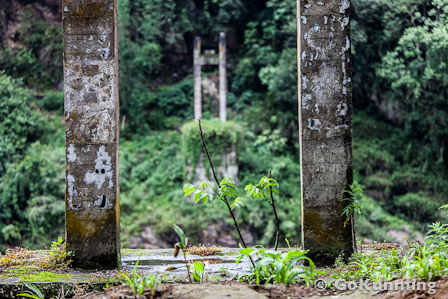 Although many new suspension bridges have been built over the last few years, others have been lacking upkeep and have fallen into disrepair. 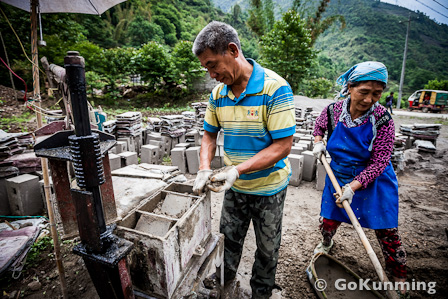 Many houses in more remote villages are still made of wood and bamboo, but hollow bricks produced with simple machinery are more common in newer homes. 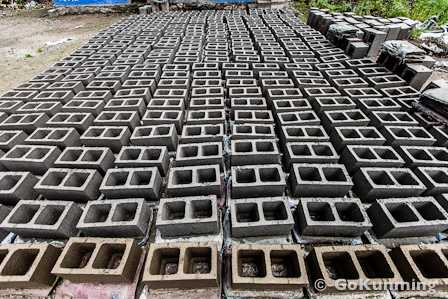 The bricks are dried in open air before being transported to nearby small construction sites. 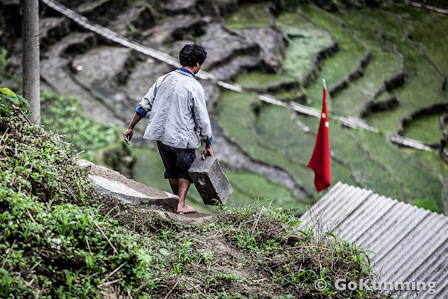 Building materials are often carried down the rice terraces by hand due to the lack of machinery, roads or proper paths down the slope. 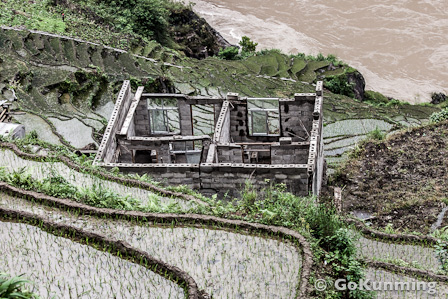 A house under construction is surrounded by the common sight of terraced rice paddies. 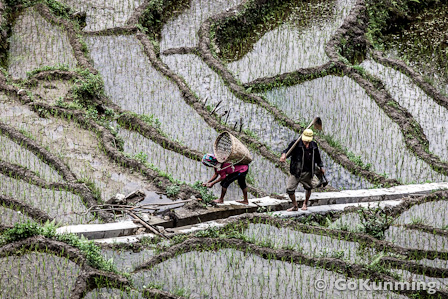 Most of the work in the fields is done by hand. Women often carry heavy loads in bamboo baskets. Small concrete canals between the fields transport excess water down to the river. Many Lisu women still wear their traditional costumes, but as infrastructure improves, mass-produced clothing is increasingly finding its way deep into the valley and its villages. A viewing platform stands at one of the Nujiang's many bends a few kilometers south of Lishadi, offering breathtaking views. In the distance on the right, a large hole can be seen in one of the peaks. In foggy weather the peak's hole resembles a bright moon and is known locally as the Stone Moon (石月亮). The almost fifty-meter-wide hole is part of a peak in the Gaoligong Mountains (高黎贡山) marking the western side of the canyon and creating a natural border with Myanmar. Located at the south end of the gorge, Liuku has a sub-tropical mountain climate. Yunnan banana trees (芭蕉树) and their large purple flowers are common throughout the canyon. Be prepared to eat with bare hands and drink lots of bamboo wine when being treated to a meal by the Lisu. Local specialties include roasted suckling pig and pickled bamboo shoots.

Grand Canyon of the East (2011, Yunnan People's Publishing House) is available in Kunming at Mandarin Bookstore.

A selection of these photographs was submitted to the international photography project ADAY, for which photographers worldwide contributed work shot exclusively on May 15.

This looks like an amazing place. Great pics too, although I personnaly feelthe over-use of HDR in some of them gives a very fake, video-game aspect to the whole thing. Let the images speak for themselves!

I think you guys went back for the food! Man that last picture is making me hungry.

Great article — full of nice, quick, easy to read information.
I find the photos help "tell the story" and you have done a fine job.
Thanks again...

Actually none of the photographs are HDR processed.

Sean: Admittedly I did initially write the wrong characters, but I must've fixed it after you first opened the page. Cheers.

However, the geographer in me wondered about the statement "second in depth only to Arizona's Grand Canyon".

After searching for authoritative lists of the deepest canyons in the world ranked according to depth (all of which contain disclaimers that measuring and comparing canyon depths is an inaccurate art due to the different ways to define and measure them), I found a rough approximation of a list. According to this list, Nujiang (5th) is actually deeper than Arizona's Grand Canyon (12th), and neither is as deep as Yunnan's Tiger Leaping Gorge (4th) or Tibet's Yarlung Tsangpo (1st).

Link to the rankings I refer to:
www.china.org.cn/english/MATERIAL/185555.htm

Thank you for your reply. The statement you mention in your comment actually refers back to the start of the sentence, saying: "Averaging 2,000 meters from mountain ridge to riverbank ..."

So second in depth when one considers the average depth throughout the gorge.

Interesting article though. I've always wanted to go to the Yarlung Tsangpo Great Canyon. I've only seen stretches of the river south from Lhasa.

Gotcha. In any case, all of the above are impressive gorges. Yarlung Tsangpo looks incredibly remote. Kudos in advance to the first person to travel there and write it up!

Did you make it up to the Tibetan temple?