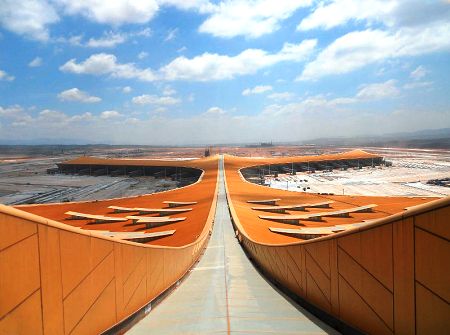 A view from the roof of Changshui Airport

After years of discussion and a few delays it seems that a hard date now exists for the opening of Kunming's new airport: June 28.

The fact that the information comes from Mayor Zhang's office suggests that the switchover date will not be delayed. Two years ago, officials overseeing the airport's construction told local media that operations at the new airport would begin by the end of 2011.

The new airport has been discussed for more than a decade, with details of its size and planned throughput only beginning to be made public in 2006.

Changshui International Airport is located 30 kilometers northeast of downtown Kunming and is expected to be a key driver of Kunming's short- and mid-term development.

In addition to expanded domestic flight services, the airport is expected to further internationalize the city with direct links to Europe, the Middle East, South Asia, Southeast Asia and possibly Australia and the Americas.

Initial capacity at the new airport includes a maximum annual throughput of 38 million passengers and 950,000 tons of cargo. It will also be able to handle 303,000 flights per year.

Taking a taxi from downtown Kunming to the new airport will be much more expensive than cabbing it to the current airport, but starting June 28 there will be four new bus routes from the city to the new airport.

From 5am to 10pm daily, shuttle buses will connect the new airport with the East Bus Station. Other airport express bus lines will include a north line connecting to Beichen Fortune Center (北辰财富中心), a central line ending at Xiyi Hotel (西驿酒店) with a stop at Xinying Residential Area (新迎小区) and a south line connecting the new and old airports. Initial fares for the airport express buses will be 25 yuan per person.

i'm no expert photographer, but i was taught to keep my horizontals horizontal... that photo, presumably an official one, makes me feel like i'm already in a plane.

Aye, but what say you to riding a bike down that ski jump of a roof??

Ha haa, I was thinking EXACTLY the same thing when I first saw this pic... followed quickly by "we could also put jumps on it..."

It *is* level—those are mountains heading upwards on the right. :)

Temporarily turn the airport into a crankworx event a week before offical opening to raise the international publicity of Yunnan as a destination for outdoor sports and a chilled lifestyle!