China's May Day Golden Week holiday is over and summer has begun. Unlike family-oriented holidays such as Spring Festival (Chinese New Year) or the Mid-Autumn Festival, May Day is not centered around spending time at home with the family - which leads to people going out and... doing things.

Much took place in and around Kunming over the last week, here's a short wrapup of some of the more notable events: 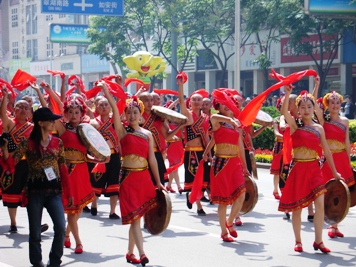 The Kunming International Cultural Tourism Festival held different 'carnival' events all week, one of the highlights being a culture-themed parade down Renmin Zhong Lu. Cities and ethnic groups from around Yunnan paraded down the street, typically dancing and playing instruments. The floats ranged from the beautiful to the bizarre and everyone seemed to hold up well under the hot Kunming sun. As with any parade, a big part of the attraction was the crowd itself, who seemed to enjoy the international entries from around Asia the most. For more photos of the parade, check out this gallery. 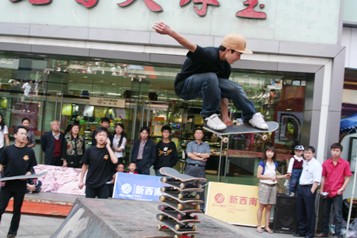 Also on May Day, the Kunming Skateboard Championships were held in the small skate park outside of New Southwest Shopping Mall. We caught the morning competition, which was less competition and more of an opportunity for Kunming's diehard skaters (and a couple of BMX bikers) to show off for a crowd. At first the skaters were jumping a wall of skateboards but then switched to jumping each other, eventually six brave young men were being jumped by skaters as well as the BMX bikers - thankfully no one was hurt during the stunts. We've also added a Kunming Skateboard Championship gallery. 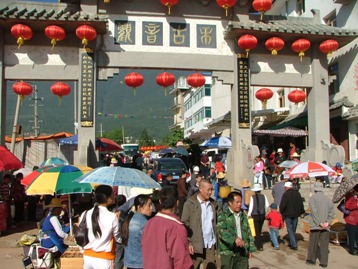 After a few lazy days in Kunming we wanted to go even lazier, so we caught a bus to Dali to take in the Third Moon Festival (三月街, Sanyue Jie). The festival lasts one week and attracts hundreds of thousands of visitors, primarily from regions that were once part of the Ancient Tea and Horse Caravan Route (茶马古道, Chama Gudao), which includes dozens of cities and towns in Yunnan as well as Tibet and Myanmar. After the superdense crowds at the parade in Kunming a few days earlier, we decided to go for something a bit more chilled out and headed down to the old town for cold lemonade and a nap in a hammock.

On Saturday night, South Silk Road and Tang Renti played a short set before a crowd of around 20,000 as part of the ongoing Kunming International Cultural Tourism Festival's youth showcase at Century Plaza. We've posted video footage of it here on YouTube.

Our 48-hour Dali retreat ended on the weekend and we returned to Kunming to sample Cacaja, the new Indian restaurant on Wenhua Xiang. As with Chapter One, Cacaja also features an Indian chef. This is the third restaurant in a chain with other locations in Xi'an and Chengdu. Judging from the reaction by locals and foreigners to the recent emergence of Indian cuisine in Kunming it seems that a lot of people have been waiting for authentic Indian food for a long time.