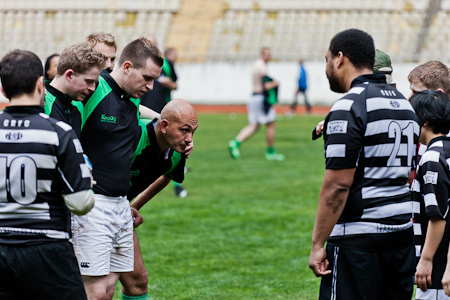 Editor's note: The following summary of the first match by the Kunming Flying Tigers Rugby football club has been provided by Matt Bowden, with images by Yereth Jansen. If you would like to promote your local sports team on GoKunming, get in touch via our contact form.

Saturday's rugby match between the Kunming Flying Tigers and the Chengdu Pandas was preceded by a bad omen: in this time of severe drought and six-week-long stretches of blue skies and sunshine, the Pandas' arrival was accompanied by rain, forcing Kunming Stadium to cancel the game. Luckily a last minute back-up was found, with Tuodong Stadium offering their top-class pitch regardless of the weather. 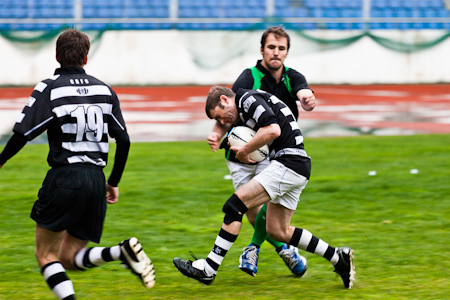 The game got off to a solid start with the Pandas facing a great deal more resistance than they had expected from the inexperienced Tigers. As both teams settled into a slow, forwards-dominated game, breakthroughs were hard to come by with some excellent tackling and well-drilled defences. The rain - at one point torrential - induced a number of handling mistakes but neither team seemed to be able to capitalise on these errors.

With the half-time break looming, Chengdu finally managed to claim their first try but were unable to convert the kick. Reacting to this minor setback with increased effort, the Tigers were able to exploit a gap on the left-wing with Rob McElroy setting up Jared Price for Kunming's first ever try. McElroy's immaculate conversion put the Tigers in the lead going into the second half - a scoreline that had the Pandas visibly rattled. 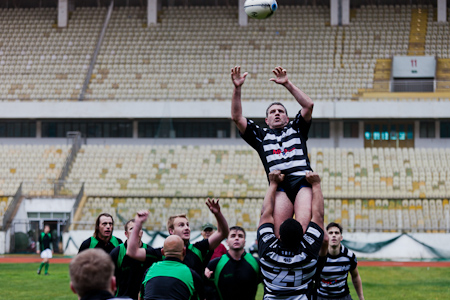 As the rain cleared in the second half there were fewer mistakes and the pressure continued to rise. Chengdu's attempts to break Kunming's defence were frustrated until a well-placed kick was touched down just over the line by one of the Pandas. Another try followed soon after for the Pandas, with their back-line finally opening up space on the wing. Combined with the subsequent conversion this took them twelve points ahead to 19-7. 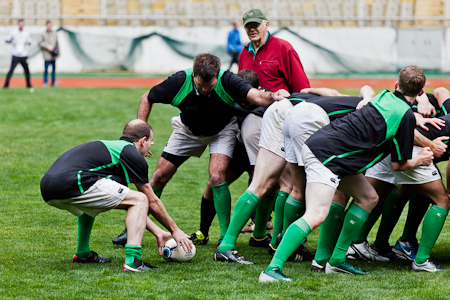 Instead of hanging their heads, and despite the clock rapidly ticking down, the Tigers responded with unhurried, focused plays, and this soon paid off with Karl Sutcliffe powering through the Chengdu defence and releasing the ball to Jeff Fuller for a well-deserved try. 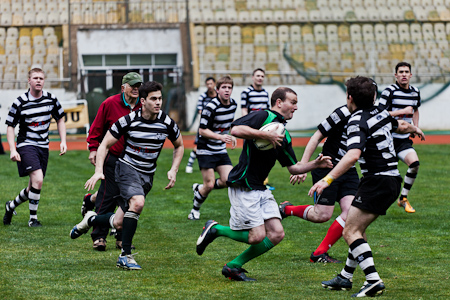 To kick a conversion from such a difficult angle on the wing was no mean feat, but Rob McElroy didn't let his team down. Trailing 19-14 and with only a few minutes to go until the final whistle, the Tigers managed one more surge towards the Chengdu try-line, from which they were ultimately repelled.

As the final whistle blew the Pandas breathed a huge sigh of relief, while the defeated Tigers still had a great deal for which to be proud. Only five of the Kunming team had played in a rugby match prior to this weekend's game, but now the Tigers are well and truly on the China rugby map, having come very close to beating a much more experienced side.

Cheers Omgiri
It was an awesome job from the Kunming guys - especially the ones playing their first game. Thanks to the Pandas for coming down and being such great tourists, JJ for reffing the match and everyone who helped to make it happen.
The Flying Tigers will be back!

With so many absolute beginners on the team, Kunming Flying Tigers performed in a way which surprised everyone - - especially the Chengdu Pandas. The Pandas were actually lucky to come away with a win. Great start for the Flying Tigers!!

Can't wait for the rematch!

Cunia Go!!!! I hope you are better in Rugby than football .....ahahaha

下次去成都把熊猫队杀的片甲不留！哈哈！
ps： Do not forget to wear your tiger hat！！！！！

Thanks again to all the 'Mingers and JJ for everything before, during and after the match, it was an epic weekend. We're really looking forward to hosting and stomping you lot in the return fixture in Chengdu.

Mingers, you guys stole my heart. As promised, we came and slayed you, but it went with honorable resistance and provoked a lasting bromance between the Pandas and the Tigers. Awesome tour! Come to Chengdu soon!

PS. Half time score was 7-7. In Fitzy's defense, he scored an awesome conversion on our first try. The second one we missed.

Thank you very much Flying tigers. Actually it was an awsome week end. We can't wait to see you in chengdu for a remake.

Great game and great effort by all involved. Lets hope we can beat them in O'Reilly's later in the boat race!

September 23, 2021 "I sell nearly new washing machine (bought only one year ago) It can handle 5.5kg of laundry and it's fully functional - no problems at all. FREE DEL …"
Living in Kunming sunjiangyu