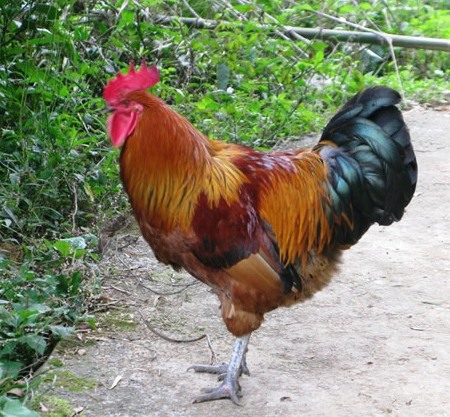 Recent reports of Chinese marathon runners raising their own chickens have put a spotlight on training conditions in Yunnan in the runup to the London Olympics.

Western and Chinese media have picked up the story of Chinese marathon runners allegedly rearing their own chickens for food.

Team leader Tian Xiaojun (田晓君) made headlines last week when he said the team was raising its own chickens due to food safety concerns arising from the lack of an athletes' canteen in Lijiang.

"In order to ensure the nutrition of the athletes' meals and the safety of their food and drink, the coaches couldn't help but consider raising chickens," Tian told Xinhua.

Coaches had reportedly also traveled to the Jinsha River to buy fish and visited herders at more than 3,700 meters above sea level to procure "green ecological" yak meat.

The athletes were reportedly concerned about ingesting a drug called clenbuterol. The drug is banned by the International Olympic Committee because it affects human metabolism and aerobic performance. In Chinese it is usually referred to as shouroujing (瘦肉精) and sometimes given to chickens and other livestock via feed or injection to lessen their fat content.

In 2010 national women's judo team member Tong Wen (佟文) was banned from competition for two years after testing positive for clenbuterol. Her ban was later overturned and she will compete in London. China's judo team has reportedly begun raising pigs to avoid any possibility of a repeat incident.

Days after his Xinhua interview, Tian told Chinese sports website Titan that things had been blown out of proportion and the marathon runners weren't literally raising their own chickens.

The team bought a dozen or so free-range chickens to supplement the runners' diet with additive-free meat, Tian reportedly said. The chickens were running around the courtyard at the training facility but were not being actively raised by athletes, he added.

Chickens aside, there seems to be no confusion about the Lijiang training base's lack of athlete dining facilities. At present, runners cook for themselves or eat at local restaurants. New training facilities in Lijiang have reportedly been completed but will not officially be ready for athletes until the end of this year – after the Olympics.

In 2010 the Yunnan government pledged US$280 million to upgrade existing facilities and construct new athletic centers over a ten-year period. Provincial officials' stated goal is make Yunnan into an international training hub for elite athletes from around the world.

I really don't know if I find this hilarious or really, really sad...

The really sad thing is that we can't eat in China without being exposed to chemicals that are banned in other countries,,nice