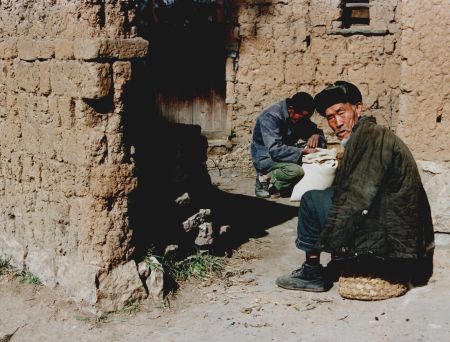 Born in 1954, Kunming native Yu Jian (于坚) is a poet and essayist known for his plain, down-to-earth verses. Yu is a prolific writer of poetry and travel pieces and his work has appeared in Chinese literary journals since the late 1980s.

Two of his longer and better known poems include Dossier Zero (or File Zero, 零档案) and Flight (飞行) . Yu's poems have been translated into foreign languages including French, English, German, Japanese and Spanish.

Since the mid 1990s, Yu has been a frequent visitor to Europe and North America, participating in international poetry festivals, and among other things, reading selections of his poetry in Kunming dialect. Yu is also a playwright, documentary filmmaker and photographer.

'Kunming, My Personal Movie' (昆明,我私人电影 ) is taken from a recent collection of essays by Yu Jian (于坚) entitled 'In a Faraway Place Called Mosika (在遥远的莫斯卡) published in November 2011.

The short translated excerpt below is republished here with the author's permission.

I was born in Wuhua District in Kunming where I grew up, went to school, worked, and got married. I have lived here all my life. It is like my own personal movie, the roll of film lodged deep in my memory forever.

I have written many essays on Wuhua District, but every time I write on the subject, new details see the light of day. They really are a deep bottomless well of memories.

I have seen so many roads and streets since I have travelled overseas, but I have never seen a road as magnificent as Wucheng Lu [today's Renmin Zhong Lu] in Kunming. I remember when the sun was beginning to rise, rays of light would bathe the shop fronts and glass windows above, although the shops themselves were still dark. 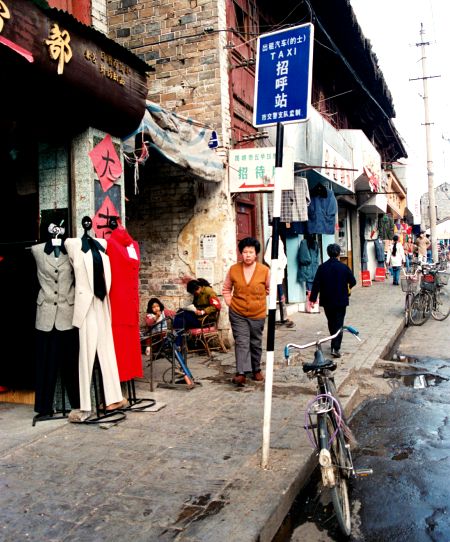 The sounds of shop and stores ready to open business could be heard as midday approached. At that time, the wooden shop shutters would be taken down one shutter at a time.

When the shops were ready to open for business, the shopkeeper would take down each shutter, neatly stacking and tying them up, then putting them to one side. Each wooden shutter had a number and a designated place.

I loved watching those wooden door shutters being taken down, one piece at a time. Light would gradually enter the shop as each shutter was removed until the entire shop was flooded with light. The shopkeeper swept the floor, sprinkled it with water while the first customer stood outside waiting.

Wucheng Lu had all kinds of stores and buildings: drapers shops, grocery stores, hardware stores, auction houses, stationery shops, tailors, Chinese pharmacies, Trinity International Church, restaurants, tea houses, movie theatres, bookstores that sold comic books for children and bookstores for adults, hairdressers, bathing houses, photo shops, stores that sold grilled rice pancakes rolled around a strip of fried dough and served with sweet or savory condiments... all the daily necessities and where people could fritter away their lives and indulge in whatever took their fancy. You didn't have to travel far away. Everything you needed was here.

I would often see white-haired old ladies sitting outside some of the shop doorways. The wheels of time would turn, and moments come and pass, but these old women sat defiantly, not moving and inch.

Other old women stood ground outside their houses selling all kinds of roasted snacks in large winnowing baskets containing small mounds of peanuts, roasted sunflower seeds, broad beans, pine nuts, and haws, all scooped up in glass round cups. Each serving cost one jiao.

There were many gardens along Wucheng Lu – every courtyard had a garden. From the streets and roads you could see all kinds of flowers throughout the year. They were not the flowers growing out from tiled rooftops, but from flower pots seen from the windows ledgers of wealthy family homes.

It was not uncommon that the courtyards of the wealthy to be closed behind large imposing gates, a pair of fiercely-looking stone beasts guarding the entrance. When the gates creaked opened, a small cloud of butterflies would appear. One of them ended up on the ground struggling to take flight. I caught it and touched its delicate wings with my fingertips, the palm of my hand covered with specks of powdery pollen before releasing it.

Once I was on a train. There was a group of eight people sitting around and we started talking about our hometowns and how it was not unusual these days to 'live and work elsewhere.' Seven of my travelling companions were seeking their fortunes in places like Shenzhen, New York, Beijing, and Paris. I was the only one among them that said I'm from Kunming and have lived there all my life.

To everybody's surprise, I continued to tell them, I'm a poet.

Published works by Yu Jian are available at Wheatfield Bookstore

This is such a nice text! Simple yet very touching. And a good translation might I add, it flows really well!

Yu Jian is truly THE most important literary intellectual in Yunnan, and one of the most famous poets in China. It's great to see some of his work translated here. There is so much more. If you can get it I recommend Ron Padgett's and Wang Ping's translations of his poems, Flash Cards, from Zephyr Press www.zephyrpress.org/new.html.

am USA poet in HK would like to know how it would be possible
to meet Yu Jian if I traveled to Kunming, I admire his work so much !