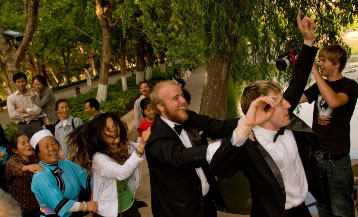 Every year countless backpackers tour Asia and Europe, but few choose to do so in tuxedos. Heath Buck of London and Doug Campbell of Los Angeles are traveling overland in penguin suits from Hong Kong to London while trying to leave a trail of goodwill and smiles in their wake.

After meeting on a drunken night in Hong Kong in November 2005, the two acquaintances stayed in contact via email, eventually deciding in late 2006 to give the 28-year-old Buck's idea of traveling across the Eurasian landmass in a tux a shot. While getting fitted for tuxedos in Bangkok last February, the duo realized they wanted to make their trip more than a romp across two continents.

On April 1 of this year the two set out on a train from Hong Kong in tuxedos, packing little more than their two tuxes, four shirts and swim trunks. So far in China they have traveled through the administrative regions of Guangdong, Guangxi and Yunnan, with a short excursion into Vietnam. After leaving Kunming today, they plan on heading through northwest Yunnan to Tibet and onward to Nepal, India, Pakistan and beyond. More information about their travel route can be found at www.tuxedotravels.com.

Three weeks into what he calls "crazy adventures of the charitable kind", Campbell, 27, said the charitable angle of their travels has quickly become the focus of their journey. The two are collecting donations via their website - they said they had collected US$1,000 to date - and are giving visitors to the site the opportunity to vote on how to spend their donations. For transparency, they are documenting their donor-sponsored events through photographs and video posted on the site.

The first donor-sponsored activities took place in northern Vietnam, where funds were used to pay for an extravagant meal for two child beggars in Hanoi. Later in a village near the town of Sa Pa, they donated a large supply of fertilizer to local farmers.

Not professing to be good people, Buck and Campbell appear to be having fun surprising people with unexpected tuxedoed generosity.

"You can have fun and do good," Buck said. "We want to inspire similar travels by other people."

Buck and Campbell aim to raise US$20,000 during their travels, which were originally scheduled to wrap up in August, but have since been extended by the duo to October. 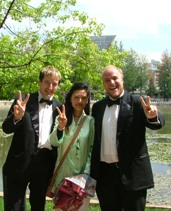 In addition to spending their time on charitable works or in transit, the two seem to be having a gas getting to meet people of all socioeconomic backgrounds wherever they go. On Monday they spent the day dancing in public in each of the city's urban districts, including starting a conga line in Cuihu Park [see top image].

They say that in their first three weeks of travel, most locals have seemed to enjoy the duo's tuxedo uniform and attitude toward travel. The few unwelcoming looks so far have tended to come from expats.

"I don't mind the looks, it's my mission to overcome that and get to talking with people," Campbell said. "Once they find out what we're about their attitudes toward us changes."

Overlooking the inconvenience of wearing a tuxedo every day, the main difficulty that has arisen so far is Campbell's underwear supply. After losing a few pairs of underwear on the road, he is desperately trying to find replacements - with no success.

"I wear a man's 38 waist, that's hard to find around here," Campbell said. He estimates that he won't find what he's looking for until he gets to Russia.

At Cuihu park with the traveling pair - Buck accommodating his feet with Nikes and Campbell with Doc Martens - the numerous staring (and giggling) onlookers suggested that everywhere they went, the pair was attracting a lot of attention. Attracting attention was the point of the tuxedos, explained Buck, who said that the silliness of wearing a tuxedo everywhere actually broke down social barriers with strangers and made it easier to have positive interactions.

"We see this as bringing the world together," he said. "The world would be much better off if people were more friendly."

I love you, crazy boys! good luck for everything and enjoy every moments of your fascinating journey!