By Chris Horton in Features on November 1, 2011 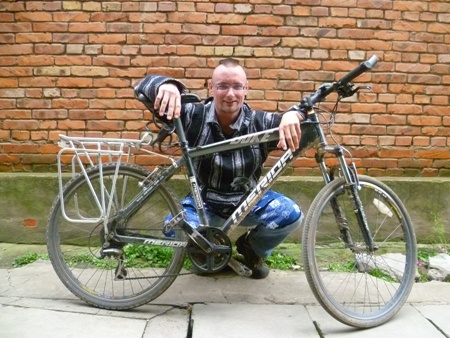 On April 29, 2003, a 20-year-old left Nienborstel, Germany on his 300-euro bicycle. He had never gone on a bicycle trip before, had only 5,000 euro on him and knew very little English and even less about bicycle repair or maintenance. On May 18, 2005 that young man, Fried Feige rolled into Kunming after cycling 34,608 kilometers through 19 countries. He had 100 euro in his pocket.

During his 749 days on the road, Feige averaged just under 84 kilometers per riding day. He camped or slept in the homes of friendly strangers for the first five months, not staying in a hotel until out of necessity while in Baku, Azerbaijan applying for his Iranian visa.

While on the road, Feige settled visa problems with border guards by drinking vodka with them, had machine guns pointed at him, passed through Bam, Iran five days before a devastating earthquake killed 50,000 people, had a five-day police escort during a stretch of cycling through Pakistan, crossed the treacherous Taklamakan Desert and slept in a tent in northern China with icicles on his beard, among other things. He had no GPS or other gadgetry to show him the way. Somehow he survived.

Today Feige is a professional cycling guide who actually plans his clients' trips. He is currently preparing the launch of his new bicycle touring company, Cycling Wild China. We sat down with him to learn more about his epic trip to Kunming, what he's been doing since and what his future plans are:

GoKunming: How did you end up deciding to embark on such an insane cycling trip?

Fried Feige: I traveled on Interrail around Europe and didn't like spending all that time on a train getting pissed. I thought about walking or taking a horse, but walking is too slow and horses aren't so convenient for crossing borders. I was already cycling to and from work, so I bought a bunch of books and started planning. I thought the trip was only going to take two years and I started saving up money. Actually, I was originally planning to go to Australia.

GK: Why did your trip end in Kunming instead of Australia?

Feige: No money. I had a hundred euro left, man. I heard about this Spring City and thought it might be a nice place. My plan was to stay for a while, make some money and head elsewhere. 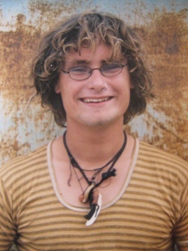 GK: How did you keep costs down while you were on the road?

Feige: I cooked for myself quite a lot, when people weren't treating me to meals. I ate lots of pasta, potatoes and rice. I just ate what I got and slept wherever I could. I was treated to a lot of free meals in Pakistan and the former Soviet Union.

GK: What did you learn while on the road?

GK: What were some of the more memorable moments of your trip?

Feige: I was sleeping under bridges in Iran, where there were guys going around with guns mounted on cars and they saw me under a bridge and I woke up with a Kalashnikov in my face. I got a five-day police escort in Pakistan between Quetta and Peshawar. That was unexpected.

GK: Where did you enjoy the local food the most?

Feige: In the Russian areas I liked the food a lot – it's similar to north German food.

GK: How did you grow as an individual during your cycling tour?

Feige: I learned to be social. I traveled alone and had to get in touch with people and communicate. I became good at starting conversations with local people.

GK: Where did you enter China and how did things go?

Feige: I entered China in Xinjiang from Pakistan and then went into Kazakhstan and rode around the Stans for a year. Then I rode across to Beijing in the coldest part of the winter. When I left Beijing I headed straight south. I just wanted to get out, that was the worst part of the trip.

GK: You were broke by the time you stopped in Kunming. How have you been supporting yourself since then?

Feige: Actually my first job in Kunming was as a gogo dancer for two weeks in Jinma Biji Fang. I lived at The Hump for three months.

I was a monkey. I was used to get foreigners to go into discos. I was a tutor for one family for a while. I managed the Hump in Kunming then the Hump in Dali. Then I cycled for half a year and worked at a cycle company in Dali. After that I was at Lost Garden.

I'm actually a professional landscaper, that's what I did before leaving Germany.

GK: What kind of person inspires you?

Feige: An English guy in 1939 cycled every day averaging 320 kilometers a day for 500 days. Guys like him inspire me.

GK: Where do you go when you cycle around Kunming?

Feige: I like heading out west and north, that's where the best day trips are, like to Anning and Fumin.

GK: Did you wear a helmet on your trip?

Feige: I never did, I should have though. I had a bandana. It gets so hot, I sweat a lot.

GK: Did you ever have any accidents during your cycling journey?

Feige: Yeah, in Russia I hit a cow. Then in Iran I got hit by a car but it wasn't very serious. In the Taklamakan Desert I hit a curb really hard and messed up my fork. I had most of my accidents with vodka in Russia. I would wake up in cornfields and throw up everywhere. There are a lot of stories, but many of them I don't remember.

I was young and didn't think anything would happen to me. I was young and dirty, nobody would think about robbing me. I remember people saying Romania was going to be bad and it was fine and there they said Moldova was bad but it was fine, so I stopped listening to people.

GK: Did you have a light for your bike when riding at night?

Feige: No. No light.

GK: Do you have any words of wisdom for people considering a big bicycle trip?

Feige: I would say anyone can do it. Whenever there's a problem with the bike or visas there's something that can be done. If you've made up your mind to do it you will be able to do it. Of course some times its gonna be hard – it will rain, things will get fucked up. People tell me I'm amazing but I tell them, "If you ride six kilometers a day, you'll be able to get to Germany eventually."

GK: Where was the most beautiful scenery on your trip?

Feige: I would say northern Pakistan, where you've got the Hindu Kush, Karakoram and Himalayas coming together. I was disappointed at how little forest I saw. Xinjiang was beautiful, the desert and Tianshan.

I think Europe would be a great place to tour around on a bike for a year or so, especially if you camp. I like camping in China. I spent two months on another trip camping in downtown Sanya. I bought a shovel for 15 kuai and started digging channels in the beach and it eventually became a tourist attraction. 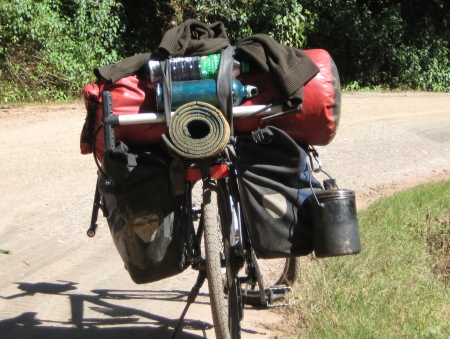 Feige's bicycle was typically laden with 50kg or more

GK: How important is gear?

Feige: I don't think you need a bike that costs more than 3,000 kuai. If you're doing longer trips, I think the most important thing is having proper tires, hubs and gears. It's really important just to feel comfortable sitting on it. When things break you learn to fix them, and that's really a part of it. If nothing goes wrong it's not the same.

GK: Do you think Chinese will eventually get back into cycling?

Feige: They have already. Since I've arrived in Kunming more and more people have been buying bicycles to get out of the city. I see hundreds of people out when I go to Xishan. I think it's going to be more for sport than for getting around town. But they're still going to have their cars. But it is changing, there are a lot of new bike stores opening around Kunming, and they're not bad.

GK: What are your plans for Cycling Wild China?

Feige: We're starting off focused on southwest China - Yunnan, Guizhou, Sichuan and Guangxi. Once we're established, we'll probably expand into Southeast Asia. I have a driver, a support vehicle and a mechanic and we are dedicated to creating exciting journeys tailored to our clients' needs and with a high emphasis on safety. We're ready to go now, but I won't register the company in Hong Kong until early next year.

GK: What is it that keeps you cycling?

Feige: I love the road, it never ends. It's total freedom.

Wao!What a man! What a journey! Here I would like to tell you,there's a new movie called 《转山》, soon will on in Kunming and the whole nation on Nov.3rd., it's based on a true story, a young man cycling from Lijiang to Tibet, here's the link of the trailer: www.tudou.com/programs/view/lOBSXBJ0j_M/

I'm dying to watch the movie, a Chinese young man cycling from Lijiang to Tibet, must be amazing and marvelous!!
Buy the way, the premiere was held in Kunming on Oct,27th.

Total 13 cinemas organized a group of cyclist cycling from the cinema to the center of the city—Shuncheng shopping center together,then watch the movie together.

Ah yes. Waking up after a cheap vodka fest in a corn field in Kaplachistan. Nothing quite like it. I remember Fried vividly from the Hump. Spent many a drunken night watching his table-dancing, glass juggling, chair-surfing antics. Good times indeed.

Fried is one very amazing individual! Thank you for everything, Fried. I remember you very well peddling around Kunming, distributing fliers for the music and events at the Hump.

You turned the bar and gigs around for myself, The Tribal Moons, and all the bands in Kunming. You treated all of us with respect and fairness.

We will always treasure those gigs, those times. I am proud to know you and have your friendship.

From the bottom of our hearts, Cas and I wish you the very best in your new endeavors and with Cycling Wild China. It's a perfect challenge and a perfect fit for you!

Man, miss u and arun too

will have to go back to china as i got drugged and robbed of my cards in bangkok, they threatened to cut my guts out if if i gave thwm a faken number

really amazing journey. someone is destined to be always on the way:)