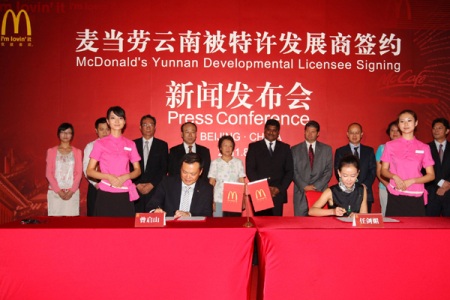 We doubt Colonel Sanders is worried

Last year Coca-Cola and Pepsico made western China a crucial front in the global cola war, now western China is a hot zone in the battle of the world's fast food giants.

McDonald's has introduced its first developmental license in China to a Kunming company with the aim of rapid expansion in Yunnan province, already a KFC stronghold.

On August 23 the US-based company issued its first developmental license to Kunming Northstar Group (昆明诺仕达集团) vice president Ren Jianmei (任剑媚), signaling a shift in a largely failing strategy to gain ground on KFC. McDonald's opened 1,000 stores in its first 19 years in China and last year announced it would double its number of China outlets by 2013.

Developmental licenses are different from the standard franchising approach, in which the franchiser sublets the restaurant to the franchisee. Under the developmental license model, Kunming Northstar will effectively own the restaurant facility and property and will have expansion rights in Yunnan, where it is committed to opening at least 20 restaurants in its first five years of holding the license. There are currently 11 McDonald's outlets in Yunnan.

Ren told China Daily that most of the McDonald's franchises it plans to open in Yunnan in the coming years will be located in Kunming. She added that some stores will also open in popular Yunnan tourist destinations – which likely include Lijiang and Xiaguan.

Up until 2007, when it began to experiment with franchises, McDonald's had opened the majority of its China outlets on its own. The company currently has only six franchises nationwide.

Much of KFC's success in the China market has been attributed to its incorporation of Chinese dishes and flavors into its menu, as well as a highly localized management structure that enjoys a high degree of autonomy.

McDonald's aims to open a new outlet in China every day within four years, but it will take more than that to gain ground on Yum! Brands, which is presently opening a new China restaurant every 18 hours.

Good ol' fast food wars. Good job Yum! company. Just open a Taco Bell in Kunming and you will have won my heart

It's about time. Would like to see some more McDonald's. I'm not a big fan of Chickenburgers, and this seems to be all you can get in China. Some more Burger Kings would be very nice, too.

Mmm yes, this is great news indeed. 1 store every 24 hours is a little too slow for my tastes...one every 24 seconds would be better. Hopefully there will soon be a starbucks, mcdonalds, KFC on every corner in Yunnan, with the 4th corner occupied by a pharmacy/gas station. Yunnan is getting more beautiful every year!

I disagree every fourth corner should be a pharmacy / gas station. A gun store would be more homely. Stars and Stripes flying on each corner and hey presto the 51st and newest State since 1959. Whoop, Whoop, Whoop.

Every time I visit McDonald's I get an instant craving for a double whopper with bacon and cheese.

How about a Maccas in the rest areas on the highways,,then you can get a coffee and have a crap in a relativly clean toilet,,,

how about eating the delicious local food, folks? ever tried it?

No, no one ever tried the delicious local food Twang. Thank you very very much for your kind, brilliant suggestion. How stupid we have all been. It will save all the thousands of foreigners in Kunming queuing outside of the few foreign restaurants. What WOULD we do without you?!

Hungry and in a hurry, consumers know exactly what you get everytime, this is one aspect to success of the fast food giants.

Sometimes I just love the adventure of a new restaurant, sometimes it's disapointing....
When I'm in a hurry and starving I dont like any adventure.......