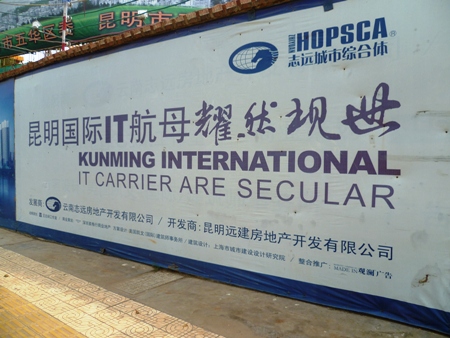 On June 17, Kunming municipal officials decreed that stores and shops with outdoor signs will have to abide by a strict new regulatory regime with several new rules, one of which includes adding an "English-language logo".

According to a Yunnan Net report, the purpose behind the directive to add English-language logos to store signs is to "convenience our foreign friends", and is only relevant to new signs. It is unclear whether the new rule includes billboards and other outdoor ads.

Should a store or shop feel that English does not suit its image, it can alternatively use pinyin, the official Romanization system of the People's Republic of China.

How much this initiative to introduce more English, or at least Roman letters, to signs around Kunming will bolster the city's attempt to project itself as an international city remains to be seen. However, if the current state of English signs around Kunming is anything to go by, the city will need to raise its game.

Today little effort is required to find signage with amusing or confusing English on it around Kunming. Should the new rules be strictly enforced, it is likely that some local businesses will opt for pinyin or the straight-from-the-dictionary translations that are often the source of much of the so-called "Chinglish" found around China.

But it is also likely that some businesses – especially those attempting to attract foreign customers or enhance their international credentials with local consumers – will potentially be willing to pay for a native speaker to help with their English-language image. This raises the prospect of job creation for Kunming's foreign residents in the areas of advertising and marketing. 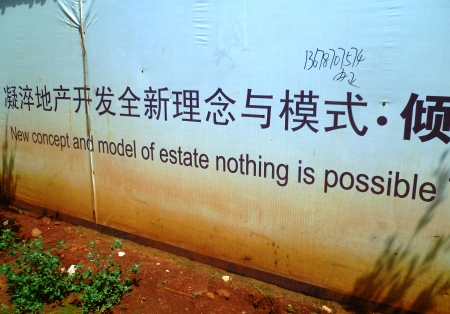 Despite the risk of a possible citywide flood of Chinglish signs, city planners may be on to something. Internationalization of a city's creative industry is crucial to projecting an international image to visitors from abroad. This has already happened to a substantial degree in Shanghai and Beijing, and is likely to spread throughout China in the coming years.

Years ago, a sign at Kunming's current airport, Wujiaba International Airport, warmly welcomed all "foreign fiends". With the opening of a massive new airport on the horizon and a rise in the number of international visitors to the city expected, Kunming appears to be preparing a new face to show the world.

IT Carrier are Secular... I truly look forward to all kinds of similarly ridiculous street signs and the entertainment that they bring. XD

On the last sign ("nothing is possible"), the focus invariably falls on the handwritten mobile number and the word "办正" (forged licences) at the upper-right corner... As is typically seen on all kinds of outdoor posters, signs and other public places (such as men's room) nowadays.

What's even more comical is that the guy used the wrong character "正" (meaning correct or straight) instead of "证" (licence or certificate).

chinglish rules! I feel so much sympathy to chinese struggling with english. Polish by native I can assure you, we have our version of poglish. Who knows what does it mean: Thank you from the mountain!? It's thank you in advance ;-)

I have less sympathy for the companies. It would take a native speaker a couple of seconds to spot these mistakes and correct them - the sign-writers clearly can't be bothered to get it right by simply asking someone. I quizzed a company leader about why this was once and he said he added English to make the sign "look cool" - he didn't expect anyone to actually read it! Makes it all the more fun for us to read, I guess.

Wtf. My shop, my sign, my logo, my money.
It's ok for this kind of regulation to address public institutions and state own companies, but as long as they don't pay for the shop sign the owner can write whatever he wants imho. Obviously this regulation doesn't make sense as shop owners naturally have a commercial interest to draw clients, but not all have enough foreign clients to justify the cost of a new billboard. As a Chinese shop owner I would be pissed. What's the fine?
Imagine the outcry if a similar law which requires business owners to add Chinese (or Arabic or Russian) to their signs/billboards/logos/etc was passed in Berlin, London, Paris or New York.

Sorry 85 cents, but my 2 cents are that this is a good law. Kunming should become more international and thus put English on their signs. Even if you can read Chinese, you are a foreigner and thus almost certain to be much more comfortable with English than with Chinese. Therefore I don't see your point.

Besides, English is an international language. None of those languages you mentioned have that status so apart from ethnic neighborhoods you have no point.

Just don't use the word Apple on your sign.

@85 cents. The article says 'only relevant to new signs'. In other words traders won't have to pay for a new sign. But when a new sign is required it needs to be in Pinyin or English, in addition to Hanzi.

This sounds good to me. It will help me find places and improve my Chinese a lot. Why will it improve my Chinese? because I will recognise more words that I have learned in Pinyin (many more than I could in Hanzi) and recognising words will help my language acquisition.
If the words are in English it may also help local kids with their English, in the same manner as Pinyin would help me.

Making the road signs in Pinyin and Chinese was a good idea. It has helped me a lot in navigating the city. Extending the policy to shop signs can only add benefit. And nobody has to buy a new sign.

Too bad it's poorly translated...

One may snicker at the Kunmingites in their new attempt to design an English ethos for the new status they are planning to carve for themselves among the world's international cities. But one need go no further than the bagel bakery on far West 14th Street in Manhattan to read prominently posted

"If you don't have nothing to do don't do it here!"

or on the sidewalk awning of the discount shop on Broadway, near Read Street

Who could not love New York and, now, Kunming?

This "strict new regulatory regime" appears to not be working. There are many new shops in our area, including a new Pizza Hut, with Chinese only signs. I guess it's another of those new rules that were created but failed on the implementation.

October 18, 2021 "I'm a nice Asian gentleman who's working and living in Kunming city,I'm well-educated,tall and handsome. I'm fit and I'm athletically built as I do s …"
Living in Kunming JanJal