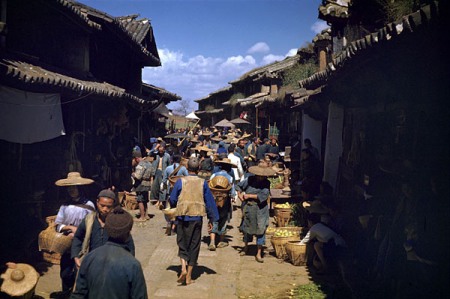 We were recently lucky enough to receive permission to republish color photos of Kunming in 1944 taken by Dr Clinton Millett. The photos offered a fascinating look at a Kunming that no longer exists.

Shortly after publishing the story, we found out that several photos from Paul R Burch, an American who arrived in Kunming a few months after Millett left the city, had accidentally been included in the Millett story and gallery. 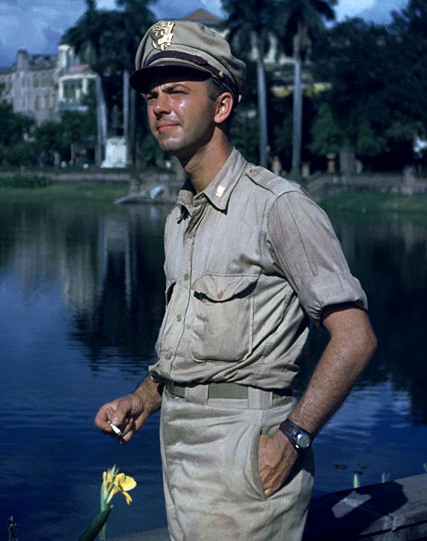 While regretting the mixup, we were excited to discover a new source of old color photos of Kunming, as well as the interesting story behind Burch and his photos, which were included in public exhibitions in Kunming in 2004 and Beijing and Pingyao in 2005.

In the early 1940s Burch was an assistant editor at the magazine Chrysler Motor News, which was an in-house magazine for the 80,000 employees of Chrysler Corporation. From 1942 through 1945, Chrysler stopped producing cars for consumers and focused instead on war vehicles including tanks for the US military and trucks for the Chinese army.

After shifting its manufacturing focus, Chrysler started up a new magazine, War Work, which provided news from the war as well as stories from the company's factories in and around Detroit. Burch was sent to China via Kolkata – then known in the West as Calcutta – where he was to serve as an expert technician and part-time journalist.

Burch was responsible for making inventories of materials flown to Kunming from New York on the hundreds of Douglas C-54 transport planes that made the long haul, which included stops in Newfoundland, the Azores, Casablanca, Cairo, Calcutta and Karachi before flying over the Himalayas.

When he returned to Detroit in December 1945, Burch left several rolls of film shot in and around Kunming with Chrysler technicians. His work photos were developed in black and white, but his personal photos from his time in Kunming were developed in color.

GoKunming thanks Paul R Burch's son, Robert Burch, for providing us with dozens of photos his father took in and around Kunming in 1945. The photos can be viewed in the photo gallery Kunming: 1945. Here are a few of the shots we find most interesting: 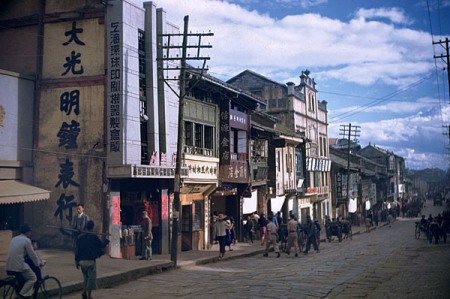 Zhengyi Lu
It is somewhat counterintuitive to think that some parts of Kunming have become more green and spacious over the years, but that's exactly what's happened to this stretch of Zhengyi Lu in the center of downtown. The street is still a bustling commercial area, but today both sides of the street are tree-lined and shady. 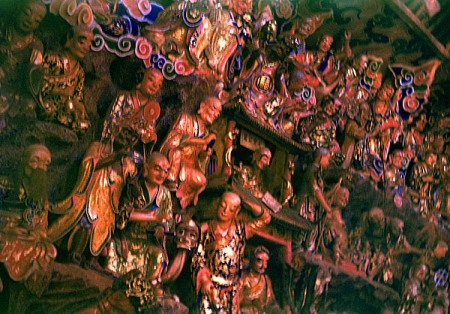 Arhats on Xishan
Today, the sculptures of arhats – Buddhists who have attained nirvana and are not reborn after physical death into any world – found at Bamboo Temple are Kunming's best-known Buddhist statues. This shot of arhats at the Temple of 1,000 Gods on Xishan offers a look at what that temple's sculptures looked like decades before the turmoil of the Cultural Revolution. Today it is generally forbidden to take photos of arhat sculptures. 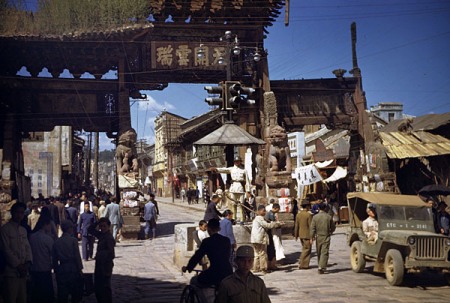 Bombed-out gateway
In this shot of the old Yunrui gateway on Zhengyi Lu, one can see that the upper portion of the gateway's right side is missing. The story goes that the missing bit had been blown off by a Japanese bomb. 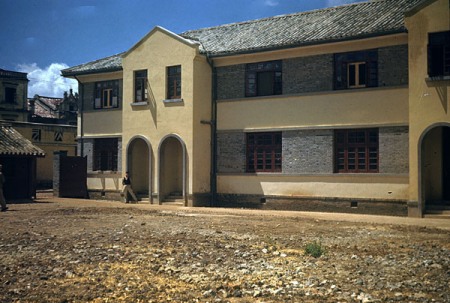 New Building
When Paul R Burch took this photo of a recently completed building, two stories was about as high as most buildings in the city stretched upward. Today the number of buildings this low within the second ring road is dwindling quickly, with new builds reaching 30 or more stories.

Thanks for these uploads guys, these are far and beyond my favorite posts on gokunming. Looking forward to more in the future!

Yes thank you indeed.
One question though. Does the exhibition state what kind of camera/s and what kind of film was used? Some of those photos look like stills from a movie roll, but I could be wrong, though especially picture number 5 reminds me of a short strip of color film that was shown like 4-5 weeks ago on some Kunming channel.
Anyways, I would appreciate if someone knows what kind of film produces/ed this colors.

And also, look at the blue of the sky *sigh*

I am Paul Burch's son.

And yes, this was the same film stock used for 35mm motion pictures. It was also available in 16mm for Bolex movie cameras.

The camera he used for these color photos was an Argus C-3 35mm, a popular camera that was mass produced for the general public in the USA.

His regular press camera that he used for magazine work was a Crown Graphic with Optar and Xenar lenses. It used 2 inch x 3 inch negatives and he only shot B&W for the magazine.

Incidentally, the 2 story building shown was actually the barracks for American soldiers that was bui8lt by the US Army.

Thank you for sharing these with us. They're great.

Incidentally, those barracks are still standing. They're set back a bit from the road on Xichang Lu just outside the Xizhan Overpass. It's been taken over by a school and given a horrible paintjob...

That's one of the nicest recoveries from a mistake, I've ever seen - well done!

Thank you very much for this information and, wow, 10 ASA - this explains a lot. Imagine how bright Kunming must have been those days and how how much light cameras in those had days could use on consumer models (aperture wise).
But I guess that's why most people were photographing and not just taking pictures.

Thank you so much for these brilliant color photo's. My family is from Lun nan, Stone Forest and it is so interesting to see what Kunming looked like 68 yrs ago.!!

Hi there, so interesting these photos, thankyou so much for sharing.
But there are too small to really appreciate them, is there any publication where they can be appreciated in their proper size?