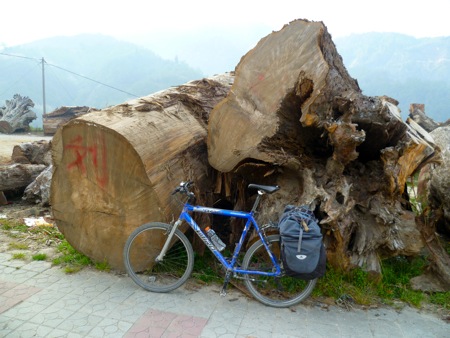 Huge logs in Pianma near the Burmese border

This is the final post in GoKunming's three-part series about our recent bicycle touring trip to the Nujiang valley. The first post is available here and the second post is here.

The road to Myanmar
It's our fourth day of riding in the Nujiang valley, and little do we know it will be one of the most difficult either of us has ever endured. 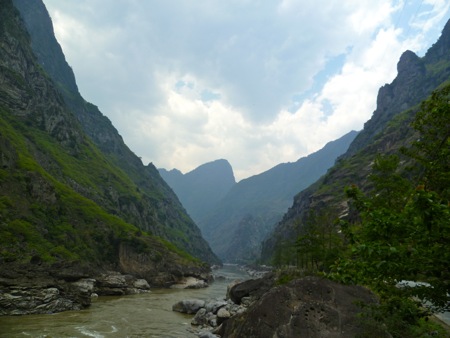 Cruising down the Nujiang valley

We spend most of the day headed south in the river valley, toward Nujiang prefecture's capital, Liuku (六库). About 120 kilometers into the ride and 15 kilometers short of Liuku we take a right turn, heading west on the S316 road into the Gaoligong mountain range and toward Pianma (片马), a town on the Myanmar border that lies on the other side of the mountain range. 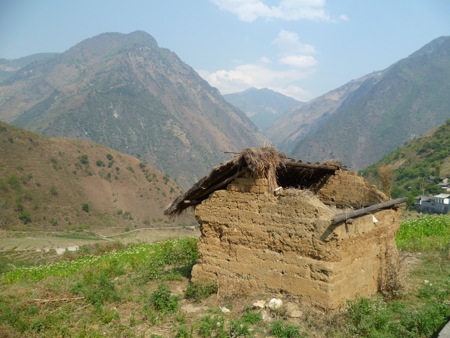 On the climb to Luzhang

By the time we reach the S316 turnoff we're already quite tired, but our maps indicate that there is a town called Luzhang (鲁掌) just a few kilometers up the road that looks large enough to have accommodation.

Our maps are wrong. A few hours, 20 kilometers of riding and about 1,000 meters of ascending later we finally roll into Luzhang, utterly exhausted and barely able to walk.

It's been a long day. We plough through some chaocai at a local restaurant, plunder a shop of its stock of chocolate, gummy candies, cookies and milk and wolf down about half kilo of gouda cheese and then pass out hard in a spartan room at the only boarding house we can find in town. 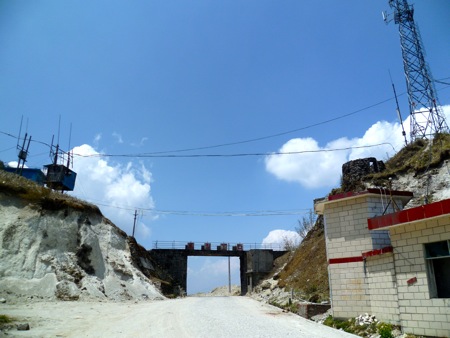 The top of the pass over the Gaoligong mountains

The next day starts off with another 38 kilometers of almost continuous climbing across the spine of the Gaoligong range. As the Nujiang recedes further behind and below us, we go from about 1,800 meters elevation to a mountain pass that tops out at 3,100 meters. Then it's a blazing 20-kilometer descent into Pianma. The whole way we're treated to gorgeous scenery and vegetation that shifts markedly with the changing elevation, including thick, verdant jungle near Pianma. 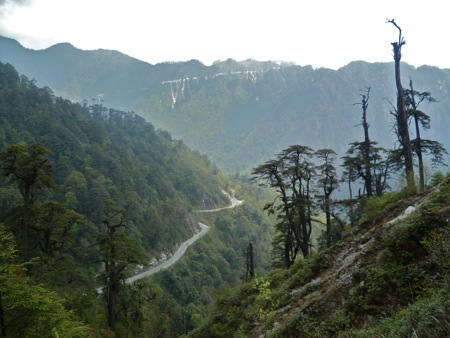 Climbing out of the Nujiang valley, Gaoligong mountains

The sleepy border town of Pianma seems largely to serve as a conduit for the flow of Burmese timber and mineral resources into China. There are several sawmills on the outskirts of town and piles of wood lay everywhere, including sections of giant tree trunks waiting to be carved into the one-piece wooden tea service tables that are a fixture of most Chinese tea shops – not to mention many homes and businesses. 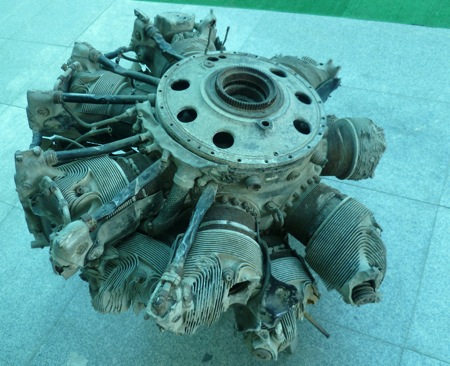 One of the plane's engines

Fox and his crew were working for the China National Aviation Corporation (CNAC), which, with support from the US government, flew the famed Hump supply route from India to China. The Hump airlift was initiated in 1942 when Japanese forces in present-day Myanmar cut off the Burma Road and the embattled Chinese government based in southwest China lost its only overland supply route that was passable by automobile.

The Hump airlift lasted 42 months and is estimated to have delivered 650,000 tons of cargo that helped keep Chinese forces in the war and holding back further Japanese advances. The memorial in Pianma states that Fox's plane went down during a return flight from Kunming to India on 11 March 1943 in poor weather.

The C-53's wreckage was discovered near Pianma by a hunter in 1996. Local people then reconstructed it and housed it in the memorial hall, which was built with assistance from American donors. The reconstruction consists only of a shell with no wiring or instruments, and it is missing half a wing. There are parts of two engines and a wheel on display as well. 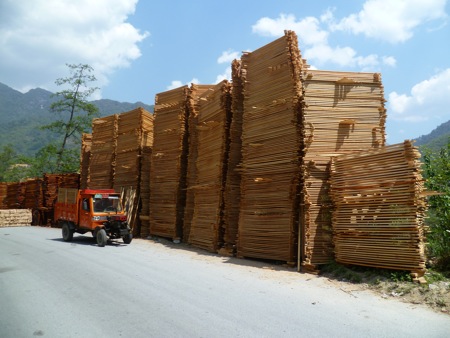 It's essentially impossible for Westerners to cross the border at Pianma, so we don't get a chance to go explore Myanmar. On our final day of bicycling we make the grueling climb back out of Pianma, descend into the Nujiang valley and cruise to Liuku. Compared to our starting point for the trip, Bingzhongluo, Liuku's weather is almost tropical, reaching highs of above 30 degrees Celsius. 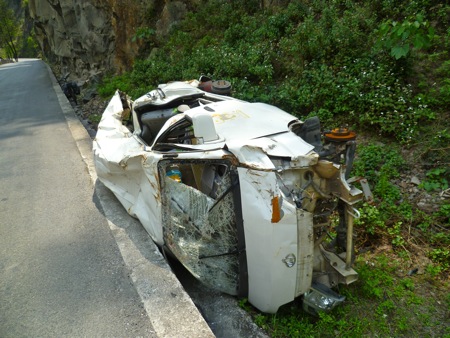 A reminder to stay vigilant on the road

We buy tickets for the following day's bus to Kunming and settle down in the evening heat with some beers at a riverside bar, reflecting on a successful cycling trip in one of the most beautiful landscapes we've seen.

Transportation: There are no commercial airports in the Nujiang valley. Fugong is the farthest northern point in the valley for which we were able to find a direct bus from Kunming. As of time of publication sleeper bus tickets to Fugong were 219 yuan, departing Kunming's west long distance bus station at 7pm and depositing us in Fugong about 12 hours later.

We had to pay an additional fee of 50 yuan for each bike to stow them underneath the bus. Although these fees are not always collected you should be prepared to pay them. It is not possible to book a spot for the bikes in advance, so show up at the bus station half an hour to 45 minutes early to make sure you get your bike stowed before the cargo compartments fill up.

On the return trip to Kunming we took a 163-yuan day bus from Liuku that departed at 8:30am and got us back to the west bus station around 6:30pm.

A mixture of some local buses and a large number of shared vehicles for hire form a patchwork transportation network for the entire Nujiang valley and the road to Pianma – so getting stranded with a mechanical failure is not a large concern if one carries some emergency money.

Money: Liuku is a decent-sized city with plenty of Chinese banks where one could likely use a foreign ATM card. The furthest north we would want to trust a Union Pay Chinese ATM card is Fugong, although there may be options we didn't notice in Gongshan. Leaving nothing up to chance, we brought all the cash we needed along with us. It was an inexpensive trip, costing us each around 1,300 yuan for eight days of meals, snacks on the road, accommodation and transportation.

Lodging: Liuku, Pianma, Fugong, Gongshan and Bingzhongluo all have hotels or guesthouses, as do some of the smaller settlements in between. As one moves north up the valley the availability of high-end options lessens and quality for a given price drops slightly. We stayed in a few extremely basic and not very clean places, particularly in Luzhang and Pianma.

Amazing that you guys biked the Pianma road back to Luku (as the pilots called it). I get tired doing it in a comfortable car; too many curves.

The last CNAC living pilots nominated me Goodwill Ambassador to China for them. Not that it does me any good. However I take very serious the job. Specially when it comes to the plane in Pianma, or Pima as they used to call it.

My dad almost died in 1944 walking from Baoshan to Pianma to find Jim Fox's remains. He did it with Fletcher "Christy" Hanks and red Holmes (Red was Jim's lifelong buddy).

The plane in Pianma is CNAC number 53. It so happens to also be a C53 (another military model of the DC3). The plane should be called CNAC #53 and not C53 as most people do. There is a purposeful attempt to veil the true History of CNAC... You can find much more in www cnac53 dot org. We are also looking for CNAC #60 and when we find it we will not call it C47 or C53 depending on the generic aircraft model name, but CNAC #60. CNAC#53 should be the same.

By the way, in your picture titled "The top of the pass over the Gaoligong mountains" you have a Japanese gun emplacement. Christy would say "you could see the white of their eyes". My dad, a CNAC Hump pilot would fly over that pass; sometimes just 50 meters above the Japanese soldiers. Look to the right, to the left of the foot of the tower. It is a rounded and stone-made.

That part of China is my favorite. Thanks for the excellent article!

Thanks so much for sharing all the amazing details and information about your trip. It looks so awesome, in fact, that a friend and I are really interested in doing a similar route! Wonder if we can touch base with you to ask you some questions and learn more about how you did what you did? Ping me if this would be ok.

Great article on discovering the CNAC#53. There are probably more of these aircraft in these mtn's. I would like to bike that area someday. Thank you!