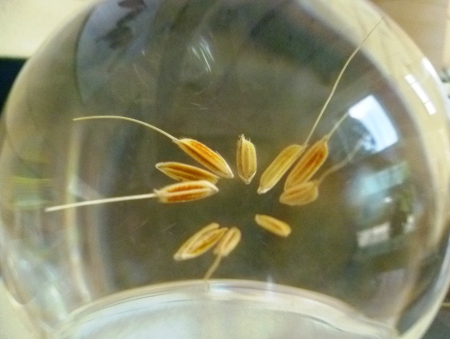 From the giant panda to the spotted owl, rare and endangered animals have long been effective symbols used to promote conservation around the world. Despite plants being the foundation of the food chain as well as consumers of carbon dioxide and producers of oxygen, they just don't catch the human imagination the way that animals do.

But things changed a bit at last year's World Expo in Shanghai, thanks to the UK Pavilion, dubbed the "Seed Cathedral". The sculpture displayed 60,000 different plant seeds at the end of long acrylic rods.

In addition to the stunning visual effect, it highlighted the global race against time to fill seedbanks around the world with seeds from crops and wild plants as an insurance policy against extinction. 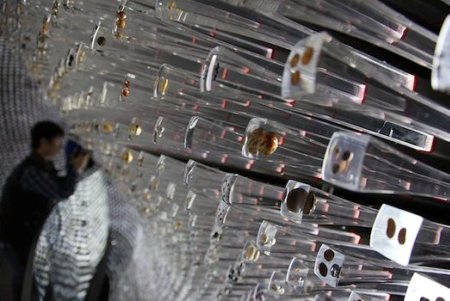 Inside the Seed Cathedral

Seedbanks are usually off-limits to the public – the world's largest seedbank, the Svalbard Global Seed Vault, is located deep below a heavily fortified island in the Arctic Circle and is designed to survive nuclear war. Perhaps this is part of the reason that the Seed Cathedral was so well received – it was the most high profile seedbank event the world has seen.

One of the sources of seeds for the Seed Cathedral was China's largest seedbank, which is located at the Kunming Institute of Botany in a building officially known as the Germplasm Bank of Wild Species (中国西南野生生物种质资源库). Earlier today we were lucky enough to be provided with a guided tour of the facilities that provided insights into humanity's attempts to "backup" nature.

In 1999 Professor Wu Zhengyi (吴征镒), the most prolific botanist in modern China – he's described or defined close to 1,700 new taxa – conceived a germplasm preservation facility in Yunnan for the conservation of biological resources. The resulting project was approved by the central government five years later in 2004.

China's National Development and Reform Committee, the Chinese Academy of Sciences and the Yunnan provincial government were founding partners of the project, which had an initial total investment of 148 million yuan (US$22 million). 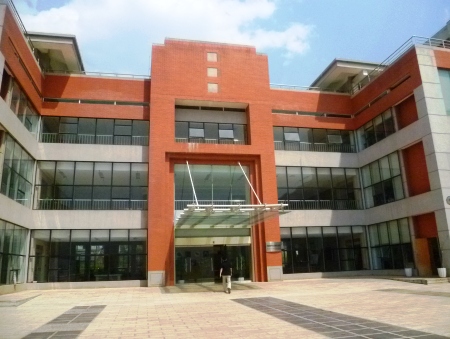 The Germplasm Bank of Wild Species at Kunming Institute of Botany

In 2005 a nationwide seed collecting program was launched by the Kunming Institute of Botany in conjunction with educational and scientific partners throughout China.

In addition to its network of 300 seed collectors across China, the seedbank also cooperates with international partners including the UK's Royal Botanic Gardens, Kew and the World Agroforestry Center in Kenya.

The partners collaborate in technical training, staff exchanges and research programs. Kew Gardens also receives backup specimens from Kunming, in case of natural or manmade disasters. The seed bank has received hundreds of specimens from 18 countries. 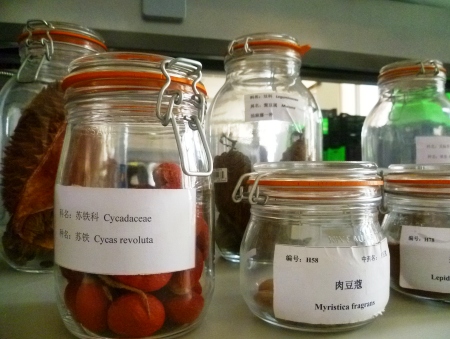 Why is cooperation between the world's seedbanks important? Staff at Kunming's seedbank told us that during the recent social upheaval in Egypt, the country's seedbank suffered looting (for the jars, not the seeds), which led to the destruction of many valuable specimens. Luckily, the seedbank had sent backup specimens to its partners abroad.

Research is also a major component of the Kunming seedbank's work. Recently it has been hard at work mapping the DNA of Chinese plants, as well investigating the effects of gamma-irradiation on the changes of Phospholipase D and plant membrane lipid composition, when time permits.

The Germplasm Bank facility has two wings: a south wing, which houses the seedbank, and a north wing which is where research and other functions are located. We spent an afternoon exploring the seedbank with Cai Jie of Kunming Institute of Botany, who showed us around and explained the process of cataloguing and preserving China's flora. 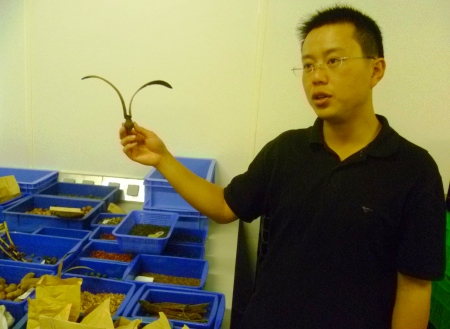 Seeds come in all shapes and sizes

Whether they're basketball-size coconuts or orchid seeds that can barely be seen by the naked eye, there is a standard procedure for when new seed specimens arrive. It is a long and labor-intensive process that ends in dried seeds being stored in high-tech subterranean freezers.

The first stop for any new arrival to the seed bank is a large room where specimens are identified, registered and prepared to move on to the cleaning stage. Cleaning involves not only removing any random dirt or debris from the specimen, but also removing seeds from whatever packaging nature has used to encase and protect them. Simple tools such as sifters as well as more complex seed separators help lab technicians do their job as quickly as possible. 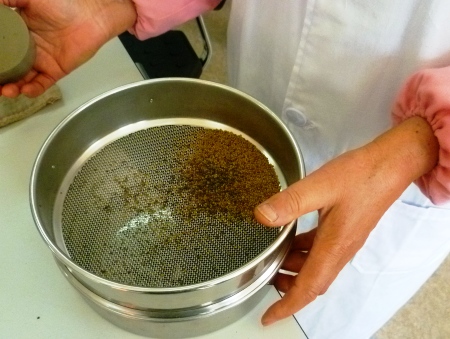 Cleaning seeds with a sifter

Most seeds require a substantial amount of labor to be cleaned, but specimens of some seeds, such as those of the poplar tree, can be extremely difficult to clean, requiring as many as three people working for one week to get the job done.

Specimens awaiting cleaning are stored in a special "dry room" connected to the cleaning room by an airlock straight out of 2001: A Space Odyssey. The dry room is filled with paper and cotton bags filled with specimens from around China and the world – we also saw some from Russia and Africa. Plastic bags are not used for seed storage because they do not allow the seeds to "breathe". 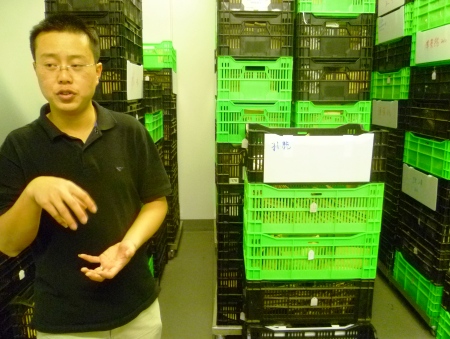 After cleaning, seeds are taken to be X-rayed by technicians who check for hollow or damaged seeds. The seeds then travel to a second dry room where they are meticulously counted, weighed and separated into an "A" group that is given to third parties, germinated or used in research, and a "B" group which goes on to frozen storage. In theory, the A group is kept as small as possible, and can be replenished from the larger B group over time as needed.

Seeds readied for storage are placed in small airtight glass vials with plastic lids and then stored in large airtight glass jars. A small purple silica gel packet is placed inside each vial with the seeds – should the integrity of the cap be compromised, the gel will turn pink.

As a security precaution, each vial is only labeled with a scannable bar code, to protect the seeds, many of which are rare and valuable. In addition to this measure, there is ample video surveillance in the seed bank to deter any would-be seed thieves. 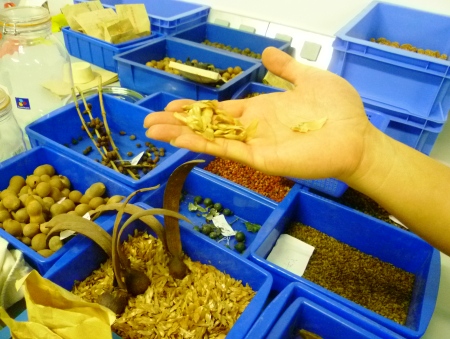 By the time the seeds have been processed in the second dry room, their oil and moisture content will have dropped to two to seven percent. Finally, they are ready to head underground.

After being notified that we would not be allowed to take photos of the freezer room, we took an elevator two stories underground to another airlock, which led us into a slightly chilly room with five large freezer doors and a couple dozen technicians in winter coats handling specimens at their work stations.

We could not enter the freezers, but we were able to look inside through windows on the doors. Each freezer was packed full of stainless steel shelves on tracks that could be moved laterally by turning a large wheel mounted on the side of each shelf. All told, there is 190 square meters of freezer space down there – enough to hold 170,000 seed specimens. Given the number of specimens that we saw waiting to be processed, there is not much doubt that more freezer space will eventually be needed.

The elevator returned us to ground level, where warm sunshine was flooding in through large windows.

Visiting a seedbank was an interesting experience, but the fact that humanity has recently taken to building seedbanks around the world is a reminder that as a species, we have the power to destroy many or all of the plant species around us if we so choose. Seedbanks are good insurance against the threat of extinction, but like insurance policies, it is best to never need them.

Interesting post. Kind of scary to think of extinction, maybe, but what's even more scary is who is behind the "insurance" that could help us keeping up our biodiversity in future emergency scenarios: Bill & Melinda Gates Foundation, Rockefeller-Foundation, Monsanto, Syngenta, DuPont Pioneer Hi-Breed, Consultative Group on International Agricultural Research...
now that's the real scary part

Anyways I added two movies on the topic to my watchlist
seedwarriors.org/
www.diverseeds.eu/DVD/Home.html

Thanks for an interesting article. I have blogged about it here: agro.biodiver.se/[...] You will notice that I believe your information on the Egyptian genebank requires verification.