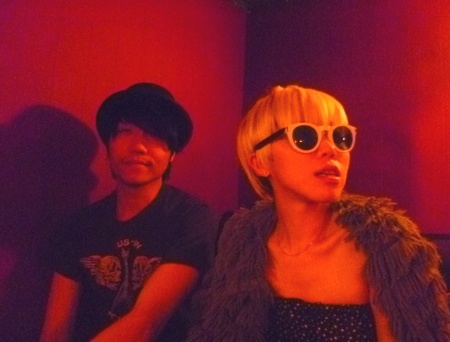 Not long ago, during the beginning of China's reform and opening in the 1980s, cassettes smuggled from Hong Kong featuring Asian and maybe even Western pop music were some of the only links to the outside world for many Chinese – and what a world it must have seemed like at the time.

China missed out on all those years of big hair, cola wars and cocaine, but the musical spirit of the 80s – at least the more danceable bit – has been reincarnated in Beijing's "dance rock" scene, which includes well-known national acts including New Pants and Queen Sea Big Shark (后海大鲨鱼), who are currently in Kunming preparing for a show Thursday night at Laowo Bar.

Combining the stage presence of comely lead singer Fu Han (付菡) with the uptempo electro-rock soundtrack laid down by guitarist Cao Pu (曹璞), bassist Wang Jinghan (王静涵) and drummer Xiao Wu (小武), Queen Sea Big Shark's following has grown steadily since the band formed in late 2004, much of it on the back of the band's energetic live performances.

The band performed last month at the über-cool South by Southwest festival in Austin, Texas as well as opening for the Yeah Yeah Yeahs in Oakland before returning to greater China to tour in support of their second album, Wave (浪潮). We checked out some of their MP3s and discovered an interesting mix of current electronic music memes with splashes of Joy Division/New Order, Siouxsie and the Banshees and maybe even Pop Will Eat Itself, but in a good way. All told, it was more than enough to convince us to check out Thursday's show.

We sat down with Cao Pu and Fu Han to find out more about the world of Queen Sea Big Shark:

GoKunming: You've recently returned from playing South by Southwest, what was most memorable about your experiences there?

Fu Han: Sixth Street in Austin is where all the people hang out. There are loads of bars that during the day serve food and coffee and then at night all of them are hosting live music.

Cao: When you walk down Sixth Street at night, at least during South by Southwest, there are so many shows going on at the same time that your ears can't figure out what's going on. It's like Chinese people setting off firecrackers.

There's a slogan there: "Keep Austin weird." It seemed like almost everything we saw there had an element of weirdness to it, but it was a lot of fun. Actually, Yunnan is very weird too. 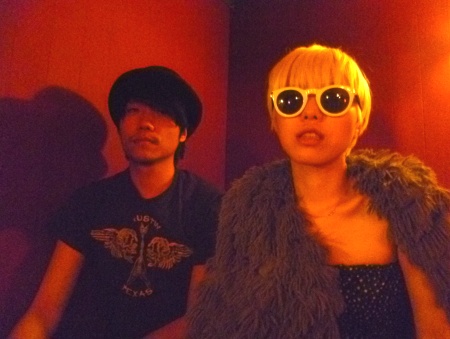 GK: Did you catch any performances by other bands while you were there?

Fu: We saw loads of shows while we were there, we did everything we could to see as many bands as possible.

Cao: We saw Friendly Fire and Old Future, probably the best hiphop act in the States right now. We even stood outside a Duran Duran show and listened to their show. We originally thought it was TV on the Radio.

GK: When's the last time you played in Kunming?

Cao: We last played here four years ago. It was also at Laowo Bar, I remember the hammer and sickle painted behind the stage made a big impression on me. I also remember the venue being U-shaped and having an upstairs... it's a good venue for shows.

GK: You frequently play large festivals but also perform in small bars like Laowo around the country, which type of venue best suits your music?

Fu: Both experiences are different, but they're both good fun.

Cao: It's good to play in both kinds of situations. Small venues are cool because you really get a chance to interact with the audience. Festivals are fun because the sound is so much fuller.

Fu: Big festivals tend to be more of a total package in terms of sound, audience and the all-round experience. But small shows can be like a party. Our last show was in a bar in Changsha that was overlooking a skating rink, it was pretty wacky.

GK: When you get up on stage before an audience, what are your goals as a band?

Fu: We want to fill the dance floor.

Cao: We want people to listen to our songs and appreciate them, and having fun is a part of that, but lately some audiences have gotten a bit out of control. Sometimes it can be a bit over the top... if people can have fun but be chill about it, we're happy. 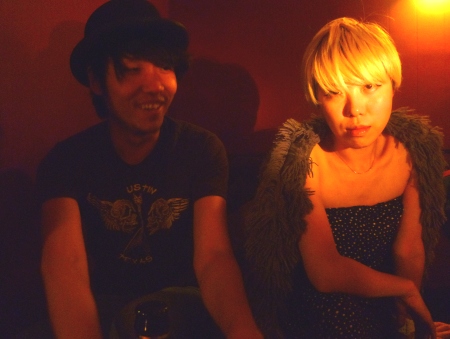 GK: Lately you've been performing all over China as well in the US – what do you find most challenging while on tour?

Fu: Having to travel around with so much stuff. Taking it to a venue, performing, and then breaking it all down without losing anything is not easy.

Cao: The thing is, it's not performing that's draining while on the road. It's the logistics of it all. We of course travel with instruments, but we also have a lot of other equipment that we're taking with us too. Constantly moving around under these conditions can be extremely tiring.

GK: What do you have planned for the rest of the year?

Cao: After we're done with this tour we'll go to Shanghai for an event organized by Chivas Whisky. There are a few festivals lined up too. We wanted to write a few songs while we were in Austin but we were all too busy partying.

Fu: We'll probably release a couple of EPs before year end. One will be live songs and the other will be electro remixes of some of our existing songs. We have a few friends involved in electronic music in Beijing and Shanghai and want to work with them.

I don't think many bands in China try to balance rock with electronic music... that's pretty much the theme of our last album: man and machine.

GK: What has been the best thing about your current tour?

Cao: Taiwan was cool. Yeah, eating too. Kunming is a delicious city, if you go to Beijing you'll find that there's a lot more flavor in food here. You've got spicy, you've got sour, and everything's intense. There's a few Yunnan restaurants in Beijing but they're not very good. 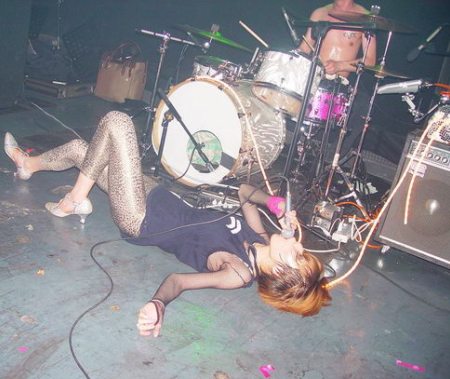 Another night at the office

GK: How do you unwind on the road?

Cao: We often spend time at bathhouses or massage parlors getting massages. Actually, a lot of bands in China do this on the road.

We usually play four cities in a row before taking a day or two off. We'll play Kunming tomorrow, then Chengdu the next night, followed by Chongqing the next night and then a gig the next night in Xi'an before we rest. It's really important to take advantage of downtime when you have it.

Fu: We also like to go to parks and other chilled out places. Playing gigs at bars is noisy, so when we have free time, we want peace! (laughs)

Cao: We almost never go out to bars or clubs.

(Smiles) So, do you know any fun nightspots in Kunming?

Love that band!!
Thanks for that great interview!
See you guys at Laowo!

Don't like that band at all and I saw it on big and small stages. You might think at first ah it's ok for the 1st song, but then it gets really annoying.

I think it's totally hyped up and kind of artificial artsy fartsy stuff, similar to Pet Conspiracy. Anyone know the producer behind them? Afaik it's a laowai...

Once again, good to see haters chipping in. Feel free to share your band's douban link joe, I'm sure you guys keep it real.

Went to the show tonight and the band couldn't have shown more respect to the audience, despite people getting up on stage and acting like tourists while the band was trying to perform.

Can't get enough of people criticizing others for doing things that make people enjoy their lives. Kunming would be so much better if no bands passed through at all!

good show. just nice to have live music. i hope laowo can keep it coming.