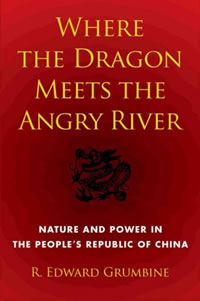 Wen's call for further investigation into the environmental impact of a proposed 13-stage dam on what is considered Asia's last pristine river is believed to be the first time in PRC history that pressure from environmental groups overturned government plans for development.

Across the Pacific in the southwest US state of Arizona, R Edward Grumbine read a New York Times article about the moratorium on damming the Nu, aka the "Angry River".

Grumbine, Environmental Studies faculty at Prescott College in Arizona, took interest in Yunnan as a crucial proving ground for conservation in China. He came to Yunnan for the first time in 2005 and has been back several times since to visit the frontlines of the clash between conservation and development in China.

Grumbine's research during these visits forms the backbone of the book Where the Dragon Meets the Angry River (Island Press, 2010).

Where the Dragon Meets the Angry River is Grumbine's account of his search for answers about the tension between development and conservation in China. His travels in Yunnan answer some of his initial questions, but also open a Pandora's box of new ones.

The main question about Yunnan that lies at the heart of the book is "whether the province can preserve its unique cultural and natural heritage while taking advantage of the benefits of modern China."

Yunnan is the central character of this book, which starts out with an interesting and illuminating overview of the region's geological and biological history. Throughout the book, Grumbine's writing style is relaxed while still capable of conveying large amounts of information without overloading the reader.

Another of Grumbine's strengths is his ability to analyze and understand the different motivating factors for the different players in each situation, including local and central governments – even himself. Whether dealing with Han people or Yunnan's numerous ethnic minorities, he attempts to understand them on their own terms rather than applying Western standards.

This is not your average "China book", in which an outsider attempts to make sense of the Middle Kingdom. It is a collection of observations made by a conservationist attempting to view the changes taking place in Yunnan without any preconceptions.

As the author quickly discovers, different areas of Yunnan are feeling different kinds of environmental pressures. In Lijiang in the province's northwest, tourism is putting stress on local ecosystems. Rubber and other cash crops including tea are destroying biodiversity and the last of China's old growth rainforests in Xishuangbanna. And of course, suspended hydroelectric power projects still threaten the country's last undammed river, the Nu.

In this book, the government often appears to genuinely care about making the right choice with regard to environmental issues, but sometimes fails to because of different departments working against each other.

Grumbine acknowledges the value of international NGOs operating in China but concludes that ultimately change must come from within.

"China needs to evolve its own brand of conservation, one that blends the country's ancient traditions of working with nature with the smartest ideas from the outside."

Two of the places where TNC and the Yunnan government have invested much effort are in the national parks of Laojunshan and Pudacuo. These two parks have been important testing grounds for China's embryonic national park system, which as Grumbine notes, suffers from a lack of clear regulations and effective enforcement of those regulations.

Throughout the book, Grumbine takes a stark and honest look at Yunnan's environmental situation and how things will look down the road. When examining the choices available to Lijiang's poorest residents, for example, he concludes that participating in the not-very-sustainable tourism industry there is the best short-term option for the poorest residents.

When looking at the rapid destruction of wilderness in Xishuangbanna, Grumbine sees some short-term hope in proposed "biodiversity corridors" which would link remaining pockets of old wilderness with a minimal amount of new protected land.

But, as emphasized in the penultimate chapter "China 2020", Yunnan and the rest of China face sobering economic, demographic and environmental realities. In the end, Grumbine concludes that China will either lead the world toward sustainability or simply into the abyss.

One of the only issues in the book, at least for China geeks, is occasional inconsistencies with pinyin spelling of places. Sometimes it appears to be due to the accent of people he interacts with, hence "Shuhe" becoming "Suhe". Other times English and pinyin names get blended, as in the case of "Shangri-la" becoming "Xiangri-la". Ultimately, this is but a minor issue and it does not detract from Grumbine's voice.

Where the Dragon Meets the Angry River is recommended reading for anyone who would like to have a good general understanding of the current state of the environment in Yunnan and the short- and long-term threats to its future.

hey, how did you get your hands on a copy of this book? did you buy it online？ any links?

Ed was kind enough to provide us with a copy for review.

There's an Amazon link in the first mention of the book's title... hopefully it will be available around town soon.

I found an interview with the author here: