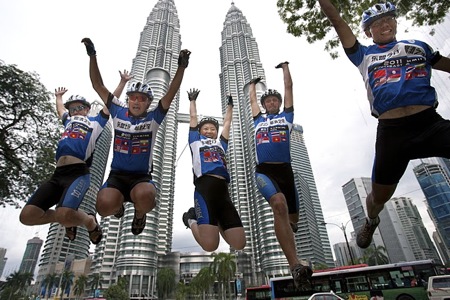 Editor's note: American Jesse Millett is cycling from Kunming to Singapore as part of a group led by explorer Jin Feibao that will deliver letters of friendship from Kunming Mayor Zhang Zulin to mayors and other leaders around Southeast Asia. Millett will be sending us dispatches from the road to share with GoKunming readers as the cyclists make their way to Singapore. More of Jesse's writing about the journey is available on his personal blog, which requires a proxy or VPN connection to visit in China. 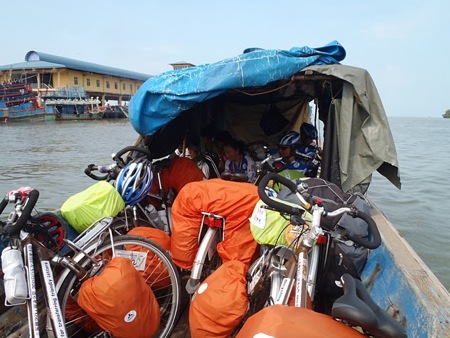 Our long-tail boat to Malaysia

From Satun in southern Thailand it's an 8km ride to the ferry station and immigration office. Regular ferries run to the archipelago of Langkawi, Malaysia, but from there you'll need to take another ferry to get to the mainland. Otherwise it's only about a 15km long-tail boat to Kuala Perlis. We had no problem at the borders, except that I had overstayed my Thai visa by one day. It cost me about US$15, and it would have cost more to extend it anyway. 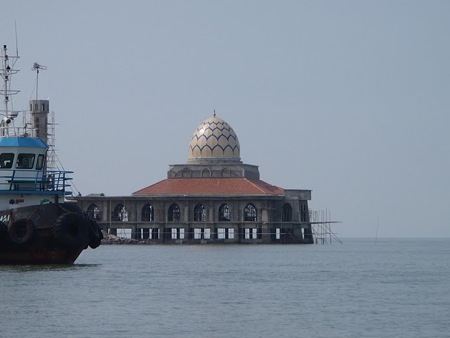 Arriving in Malaysia was like returning to China. The first thing our team did was to buy some Chinese newspapers and enjoy a nice Chinese lunch. From Kuala Perlis it is about 45km on Highway 1 to Alor Setar. We chose to take a detour along the coast for nearly 10 extra kilometers, but it was worth it as there was no traffic and a nice ocean breeze. Alor Setar has plenty of options for hotels, and there are shopping malls everywhere. There is a great Malay night food market near the Palace Mall. 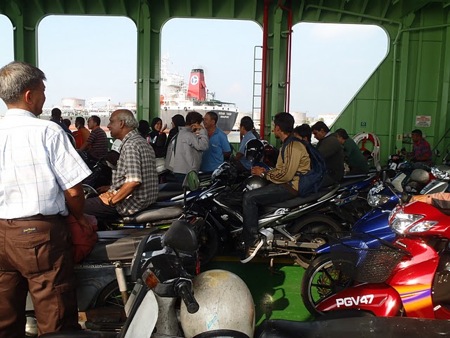 The ferry to Georgetown

From Alor Setar it's a straight shot down Highway 1 to Butterworth, which is separated from Penang Island by a few kilometers of ocean. About halfway, Pagani Satani is a good resting spot with some good Malay and Chinese food. It's at least an extra 15km to ride the bridge across to Georgetown, Penang, and we hear the bridge is dangerous to ride anyway. Alternatively there is a 15-minute ferry that only costs RM1.2 (US$0.40) and drops you right into Georgetown. 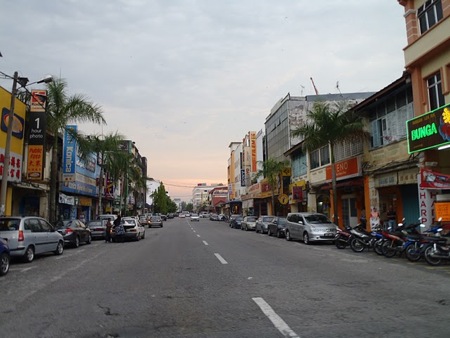 We took a well-needed one-day rest in Georgetown, a wonderful town filled with old European architecture and even older Chinese culture. The next day, we took the ferry back to the mainland and continued south on Highway 1. It's a bit tricky the first few kilometers, but just ask a local and they'll be more than happy to help. We were unsure of our final destination for the day, but we had heard some nice things about Taiping, so we decided to check it out. At about the 85km mark for the day take a left to Taiping, another 12km off the road, but totally worth it. 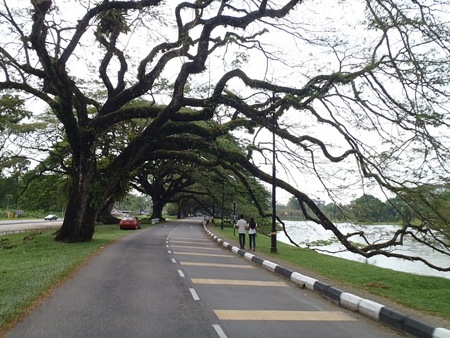 Cycling in the park near Taiping

Taiping rests at the foot of some pretty big mountains and boasts many Malaysian firsts and records. Among them, the first prison built in Malaysia, the biggest man-made lake in Malaysia, the largest tin mine in Malaysia (and one of the largest in the world), the first train station in Malaysia, and the country's oldest coal mine. After meeting some friends our first night and having a few too many beers, we decided to take the next morning to see some of what Taiping had to offer. 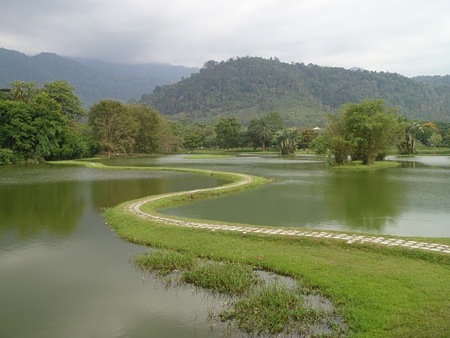 The morning began with a surprisingly entertaining tour of a traditional charcoal factory, led by the lively owner Mr Chuah. Then a walk through the mangroves and a delicious fresh seafood lunch on the water. We were overwhelmed by the hospitality of the local people so we decided to spend another night. In the afternoon we cycled around an incredible park near the town with large trees stretching their limbs out over the water and small trails bending through the lake.

We left Taiping on a different road to get back to Highway 1, only 5km away. Turning left it's another 5km to the intersection with Highway 60. We chose to take a right to get back to the coast, as it was just as long to Kuala Lumpur and away from the highways. Highway 60 had much less traffic and brought us back to the coast, though not close enough to see. Pantai Remis is a great town and we were greeted with the same hospitality that we had experienced all throughout Malaysia. A few kilometers after the large bridge over the bay of Lumut, is Sitiawan, a small town with a few hotels.

From Sitiawan follow Highway 5 south. There's not much for about 50km so be prepared with food and drink. Along the way there are a few nice bridges with great views of some harbors and fishing villages. Stay on 5 the whole way, paying attention to the signs. We missed one turn and ended up backtracking quite a bit when we realized we our mistake. In Sekinchan, there are a few small guesthouses and rumors of a homestay. 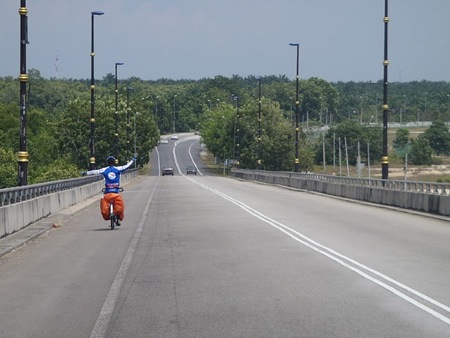 It's a nice road down the coast from Sekinchan, 30km to Kuala Selangor. Shortly after Kuala Selangor, take a left on Highway 54 towards KL. You can follow this road into the city, if you dare. At about the 45km mark on 54 there is a good place to take a rest from all the traffic and have lunch at Sagani Buloh. After here, it's anybody's bet how to get into the city. There is no direct way and a GPS – or a bus – is definitely handy, as many roads turn into expressways and there are no lanes for bicycles.

We are resting in Kuala Lumpur for a few days. We have been graciously received here, and have already had live interviews on the radio, multiple interviews with newspapers, lectures at high schools and have met with the Malaysian Sports Minister and the head of the government-funded Health Promotion Services.

I'm not sure if this trip is leaving a bigger impression on the people around us or on myself, as I have been so overwhelmed by the amount of hospitality and support that we have received.

December 4, 2021 "We're looking for native speakers who have the passions for working with children ages 2-6 to assist in multiple levels. If you love children and …"
Living in Kunming michael2015