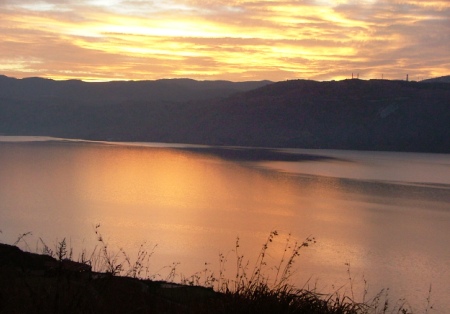 The sun may not be setting on Yangzonghai after all

The Kunming Environmental Protection Bureau has issued an update on the cleanup effort at Yangzonghai Lake (阳宗海), which was discovered to be suffering from arsenic poisoning in 2008.

The bureau is reporting an "obvious improvement" in Yangzonghai's water quality in the last quarter of 2010, with visibility increasing by 29 centimeters and a 37 percent reduction in arsenic content compared with the same period one year before.

The lake's water, which now has visibility of 2.27 meters, is now rated Class III, which is suitable for industrial use but not human consumption. In 2008 it was rated a worst-possible Class V, meaning the water was unfit even for industrial use. The following year it was upgraded to Class IV.

Eight companies operating in the Yangzonghai Basin – roughly 45 kilometers east of Kunming – were found culpable for the lake's pollution shortly after the arsenic poisoning of Yangzonghai came to light.

The main polluter, Yunnan Chengjiang Jinye Industrial and Trade Co Ltd (云南澄江锦业工贸有限公司), and other companies reportedly failed to build legally required wastewater treatment facilities. The end result was accumulated arsenic seeping into the local water table and threatening the health and livelihoods of the 26,000 villagers living in the area.

Yangzonghai sits on an administrative fault line, with a northern portion of its shoreline falling within territory administered by Kunming and the rest falling under the supervision of Yuxi. Officials involved in the cleanup effort have cited better coordination between environmental ministries in Yiliang and Chenggong counties in Kunming and Chengjiang in Yuxi as one of the main reasons that progress is being made.

Shortly after the news of Yangzonghai's pollution broke, Yuxi Vice Mayor Chen Zhifeng and 11 other Yuxi officials were fired, as were 14 provincial officials.

After years of consistent bad news about the state of Yunnan's lakes and rivers, it appears that some local governments are becoming increasingly serious about counteracting years of neglect and deterioration. The good news out of Yangzonghai follows the recent announcement that Erhai Lake's water quality has been upgraded to Class II.

Can you explain what CLASS III means for Yangzonghai Lake (阳宗海)? Can we swim safely anytime soon? Are fish surviving?

Unfortunately, I'm unable to explain Class iii, but I'm unlikely to swim in it. I should welcome an explanation of how wonderful is a visibility of 2.27 m (an improvement of 29 cm). Relate these minute measurements to the unreliable government statistics that often appear and I remain pessimistic, but I congratulate any improvement ... no matter how small.

I wouldn't swim in anything less than class I.