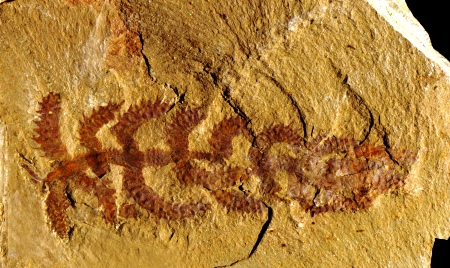 Six centimeters long and half a billion years old, a small fossil of what is being described as a "walking cactus" is filling an important void in our understanding of evolution.

Walking cactus, known in the scientific community as Diania cactiformis, is being hailed as the missing link between wormlike lobopodia and arthropods, which include insects, spiders and crustaceans. 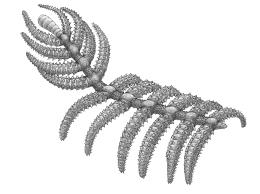 According to the journal Nature, walking cactus was a thin wormlike creature with a soft body similar to lobopodia, but it also had ten pairs of jointed legs with hardened surfaces resembling the articulated limbs of modern insects or crustaceans. One paleontologist explained the discovery's significance to Nature:

Simon Conway Morris of the University of Cambridge, UK, says the discovery of D. cactiformis provides important insights into the flourishing of new animal body plans during the period dubbed the Cambrian explosion, the sudden appearance — in geological time — of most major phyla around 530 million years ago.

Conway Morris says that the fossil "offers crucial evidence about the key step of moving from an effectively soft-bodied construction to an articulated exoskeleton — a breakthrough that would ultimately lead to such biological designs as the crab claw and the praying mantis".

It was discovered at Haikou, on the east side of Fuxian Lake (抚仙湖) 50 kilometers southeast of Kunming. The area, referred to by paleontologists as the Chengjiang Lagerstätte, is known for its fossilized sea life, collectively referred to as 'Chengjiang Fauna'.

Chengjiang Fauna centers around Maotian Mountain (帽天山) and is one of the "Three faunas of the evolution of early life forms", along with Burgess Shale Fauna in western Canada and the Ediacaran Fauna of South Australia.

This is yet another recent fossil discovery in Yunnan touted as answering major questions about how animals have evolved. In 2008, researchers discovered the oldest evidence of collective behavior found so far. In 1994, Fuxianhuia, the ancestor of modern insects, was discovered in the area.

June 19, 2021 "I own a three-bedroom apartment with two west-style bathrooms, a west-style kitchen and a West-Hill-View balcony. It is nearby Dian Chi and West Hills …"
Living in Kunming livinginchina