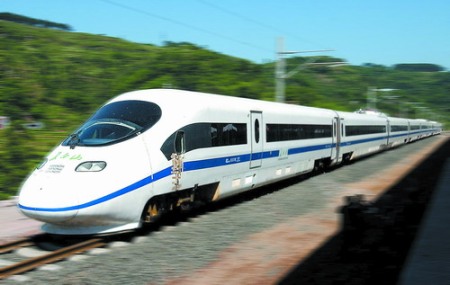 China is laying plans to extend its growing high-speed rail network outward into neighboring countries, with Yunnan as the jumpoff point for several planned lines into Southeast Asia.

There are now three high-speed rail projects between Yunnan and neighboring countries that are at various stages of consideration, according to local media reports.

The project slated to start soonest is a 1,920 kilometer line linking Kunming and Yangon, the largest city in Myanmar. Work is scheduled to begin within two months and the trains are expected to travel at speeds of up to 200 kilometers per hour (124 miles per hour).

There are also plans for a Kunming-Cambodia high-speed rail line which would pass through Vietnam. The line would be an important step in plans to eventually build high-speed rail extending from Kunming to Singapore. Specifics of the line are currently being negotiated.

Meanwhile, China and Laos are conducting a survey of the best routes for a proposed high-speed rail line between Kunming and the Laotian capital of Vientiane.

All three of these rail lines could facilitate development of a pan-Asian high-speed rail network. The line to Yangon would be an especially important stepping stone for westward expansion, should China and India find a way to cooperate.

Beijing announced in March of this year that it was interested in building rail lines as far west as London, via a northern Asia route. Yunnan also figures heavily in the government's plans, with a proposed southern high-speed rail line that could go through Myanmar to India and eventually terminate in Tehran, Iran.

Umm..last I heard was that the rail link from Kunming via Pu'er, Jinghong and Mengla to Laos, passing through Boten, Luang nam tha, Luang Prabang and terminating in Vientiane, before joining up with the Thai high speed network in Nong Khai, Thailand and then finally reaching Bangkok will be constructed first.

I haven't heard anything about the Myanmar line since this article was published...I think that until Myanmar gets its act together and starts opening up the country more, any move to link Yangon with Kunming will just become a white elephant project (at least passenger wise, maybe not freight wise, since there are important port facilities in the pipeline in the Bay of Bengal that would benefit land-locked Yunnan). Still, the project to Laos has already begun construction from what I've heard, so we can probably expect that one to be the first to be completed. Vietnam is also hopeless when it comes to co-operation with the Chinese, otherwise a high-speed rail link would already have begun construction between Kunming and Hanoi to replace the ancient existing one.