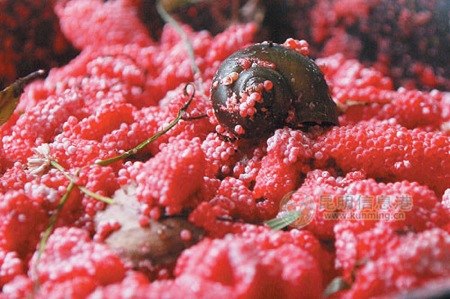 A single channeled apple snail can produce up to 50,000 eggs a year

It was only two years ago that channeled apple snails (Pomacea canaliculata, 福寿螺) were discovered in some of the Erhai's tributaries. But this autumn the lake is suddenly rife with the snails, which grow to a length of up to 7 centimeters.

Aside from threatening the lake's ecology by eating aquatic plants and outcompeting other animal life, the snails also pose a danger to the area's agricultural output—particularly its large rice crop.

The appearance of the snails is a major setback for the Dali government's campaign to improve the lake's health. The government only recently announced major improvements in Erhai's water quality after a seven-year campaign with a more than 2 billion yuan (US$299 million) price tag.

Channeled apple snails eat rice plants and have been a major pest in rice paddies across southern China since they were first found in Guangdong province in 1981. The species, native to South America, has been named one of the 100 worst invasive species in the world.

Now the Dali government—short of viable options to control the snail population—has dispatched scores of fishing boats from various points around the lake to laboriously hand-collect the snails and their eggs and carry them to incinerators.

One snail can lay up to 50,000 vividly pink eggs per year. The snails attach the eggs in large clusters to the stems of aquatic plants.

"We just cleaned the eggs off this tree a few days ago," a cleanup worker named Duan Pengju told a Kunming Information Hub reporter. "Now more have been laid; it seems impossible to get everything completely clean." 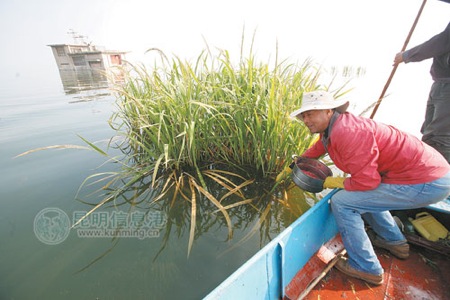 Though it is not definitively known how they got into the lake and its tributaries, the snails have existed for some time in other areas of Yunnan and are commonly sold and consumed as food, including in Dali.

Aside from hand collection, other options for ridding Erhai of the snails include pesticides and the use of predators such as ducks, both of which have been deemed too damaging to other plant and animal life in the lake.

Lake management officials are hopeful that migrating birds that are beginning to arrive will provide some relief by eating the snails and their eggs. But overall it is difficult to be sanguine about the effects of the snails on Erhai and surrounding areas.

i've had those. they were tasty. lets eat erhai to a brighter future.