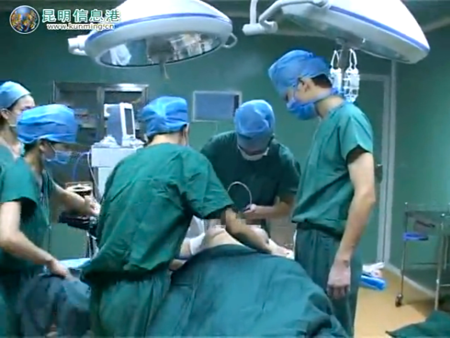 A still from the broadcast

Getting breast implants is generally a private, secretive affair for a woman, but on Tuesday morning one young woman went under the knife – and a webcam – as part of a promotion by a Kunming cosmetic surgery hospital on a local news website.

The promotional event was called the "Big & Natural Breast Surgery Worldwide Live Broadcast" (大&自然丰胸手术全球直播) by local news portal Kunming Information Hub and sponsor Renai Cosmetic Surgery Hospital, where the surgery was performed. Organizers said it was the first time such a surgery had been broadcast live in China.

The patient was a young woman named Liu Qing (刘卿) who said she was a professional model. Liu said that although her friends said she had a good heart and a pretty face they all knew that her breasts were "unremarkable".

"I hope that through this webcast I can make my sisters with the same needs find a cosmetic method that suits themselves," Liu told reporters. It is unclear whether she paid for the surgery. 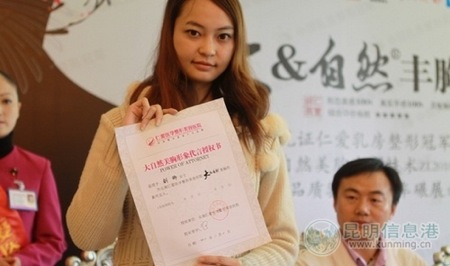 Liu Qing, shortly before her surgery

A large portion of the comments were sophomoric, including those about the patient's pre-surgery breast size ("like a chopping board").

As the 50-minute broadcast progressed from an introductory ceremony to pre-op sterilization to the actual 15-minute surgery, commenters seemed to show genuine curiosity about the procedure. They swapped questions and answers about the anesthetic, incisions and the material used for the implants.

This curiosity about plastic surgery is hardly surprising in a nation that has strongly embraced it, to the point of some women going on group surgery vacations to South Korea, which has a reputation for skilled surgeons.

China Daily reported in July that up to 80 percent of cosmetic procedures in Beijing over the summer were for high school and college students, with many feeling that going under the knife was essential to landing a good job.

Although most recipients of plastic surgery are women, nose jobs and surgery on the skin around the eyes are also growing in popularity for men.

There was some dissent on the broadcast's comment board. "Size isn't important," said an anonymous commenter from Kunming, "only shape."

Hey Peter man, check out channel nine! It's the breast exam! Check out this chick!

Damn it, Lawrence, can't you just pretend like we can't hear each other through the wall?

Oh! I'm sorry man, is Anne over there or something?

The video is here: health.kunming.cn/index/node_25780.htm

June 19, 2021 "I own a three-bedroom apartment with two west-style bathrooms, a west-style kitchen and a West-Hill-View balcony. It is nearby Dian Chi and West Hills …"
Tutor Wanted evadd

June 18, 2021 "Hey, you guys, I am Lily, in the past,I was a teacher with teaching experience of over 10 years,now I want to learn some Japanese and improve my Engl …"
Living in Kunming AlPage48