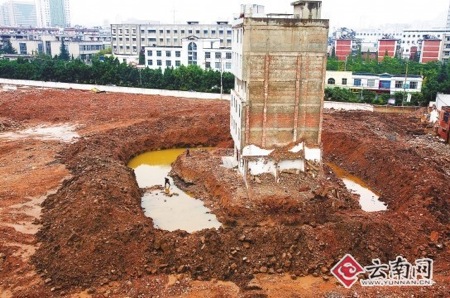 A Kunming household has been without water or electricity since October 21, their lone apartment building surrounded by a watery moat dug by property developers who want them to move out.

The family says that somebody even shot a bullet through one of their windows in an effort to get them to leave, according to a Yunnan Net report yesterday.

The report called Zhao's building a "nail house" (钉子户), the Chinese term for isolated homes whose tenants refuse to leave an area planned for development. The term first gained attention in China and abroad in 2007 when an especially pronounced case in Chongqing became widely discussed in Chinese media and on BBS sites.

The Kunming standoff began when a 53-year-old man identified only by the pseudonym Zhao saw the amount of money developers were offering in compensation for his apartment in a six-story building in the west-central Zhaojiadui neighborhood.

The development company in question was not identified in the report.

Zhao says he refused to sign the agreement on grounds that the developers had misclassified the land in order to offer an illegally low sum to owners in the apartment complex they are redeveloping.

He continued to live in the apartment with his wife and 83-year-old mother as all the other buildings in the complex were destroyed, leaving his building alone in an expanse of cleared land.

As the impasse between Zhao and the developers remained unresolved, the developers took action. On October 21 they dug a ditch around his house, knocking out the home's electrical and plumbing connections in the process, Zhao said.

They subsequently made the ditch wider and deeper and recent rains have filled it with water, creating a moat that Zhao must cross to leave or return to his house.

Kunming police have been called in to investigate Zhao's situation after a hole that may have been made by a bullet appeared in a window a few days ago. 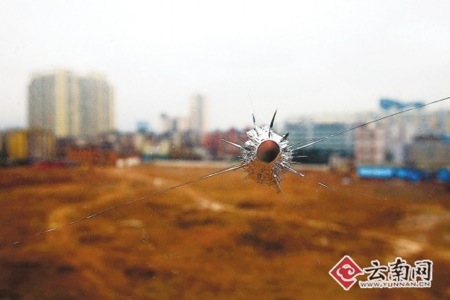 Also, looking at the entry-point and the exit-point, a high velocity trajectory will will have a nice clean entry-point and a very (relatively) mess exit point. Since the picture is taken from the perspective of looking out at the empty vast land, I would say it is definitely shot from the inside.

he may have shot the glass by himself, but he definitely didn't dig the ditch himself. and most likely he isn't asking for a lot more money compared that what the developer gains from him leaving peacefully.
it is an unfortunate story, from all perspectives.

hahahhah, fire from inside....? someone obviously has never fired a high velocity smallbore full metal jacket at a glass pane to make a comment like that. look at the crater.
the underworld rules half of the china together with you know who. hahah,, i remember one former beijing top cop shocked the press crowd at a press conference a few years back, saying "mafia are ok as long as they are loyal and 'patriotic' . hahhahah, well, ....

well, it is very simple. it is called land grab.

May 14, 2021 "Hi all, in case I won't have new roommates this June I will be looking for a house share with others :) ! If you have a room available or know som …"
Living in Kunming JanJal