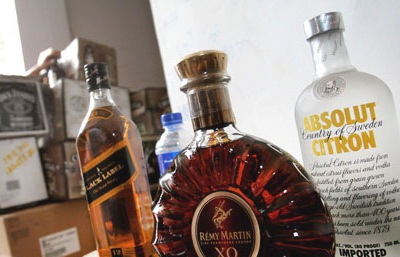 Kunming police have announced that they seized more than 1,300 bottles of liquor from three different counterfeiters during a series of raids on Friday. One counterfeiting operation that was run out of a rented room in Guandu district allegedly sold more than two million yuan (US$294,000) worth of fake foreign spirits to Kunming bars, karaoke clubs, dance clubs and alcohol distributors since May.

The leader of that operation, a man surnamed Zhong, is accused of buying counterfeits of well-known Western spirits from dealers in Guangdong province and reselling them in Kunming. Police say Zhong started doing so in May after first coming here in January on a scouting trip, during which he decided Kunming's market for foreign spirits was flourishing and it would be a good place to set up shop. 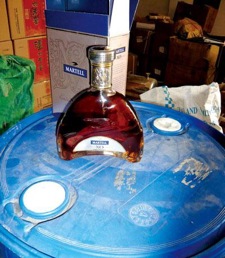 The other of the two liquor counterfeiting operations in the news was more of a homegrown affair. A man surnamed Pang is accused of both manufacturing and selling several brands of liquor in Kunming, rather than buying from outside.

The raids echo a similar case in March of 2008 when Kunming police seized more than 20,000 bottles of fake Budweiser and Carlsberg beers that counterfeiters were making through adulterating Kingstar Beer. 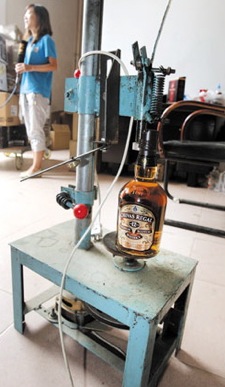 Flavor aside, police said they believed the bottles and packaging of most of the fake alcohol being sold in Kunming to be of low enough quality to be detectable by bar and clubgoers acquainted with what the genuine product looks like. Telltale signs of counterfeits include missing paper and foil seals and lack of holograms and embossed seals and text, as well as poor quality printing on labels.

Bottles that look authentic but seem excessively worn or whose caps don't fit well may be real but have been refilled with fake liquor, police said.

They added that supermarkets and large retail outlets tend to have more tightly controlled supply chains and are not as susceptible to counterfeit liquor as most bars and clubs.

An alternative is to brand it "almost" the real thing, and sell it cheap. Same as they take Apple and brand it Aepple or aPad instead of iPad.
That way, they can make some money, stay out of jail, and let us know that we buy "almost" the real thing at less price. So why not sell "Hernessy", "Martill cognacs", "Johny Wakler" and "Aboslut Vodka" (or why not "Almost Vodka")?
As long as its cheap, tastes ok, gets me drunk and doesnt make me blind, Im happy.
The one thing I have had a hard time getting acclimatized to, is the flavor of the hard liquor in China. Sure, I can get plastered for 10Y on traditional Chinese vodka, but it tastes really bad to my palate. Sorry, but the local liquor tastes like badly perfumed industrial cleaning liquid. But hey, its cheap and can be bought at any small kiosk late at night when I cant sleep. :)

Well PerNordin, you must me a newbi in China. The fake liquor these assholes produce incorporate any number of chemicals so they that duplicate the taste and color. Most of which are not made for consumption purposes. Then you come in and buy it at the bar for standard price. It is not sold to you any cheaper. Only the bars profit from selling this poison. Keep sucking it down, and you my friend will certainly be paying through the nose with following hospital bills. Don't see how that makes drinking this shit is saving you money.

The Baiju, chinese water, is worst yet. It would benefit you to do a quick search on the net about this stuff. Even if it is the "real" high grade stuff (Moutai), it has serious health effects. Even the Chinese doctors will tell you to stay away from it.

Sounds like you got some serious issues with your drinking. Hope you get it dealt with before you end up in a Chinese hospital where things quickly go from bad to worse.

BTW, as long as you keep buying this shit, they will keep on makin it. You also become the problem.

As the Chinese saying goes,

"Food and drinks will kill you, concentrated insecticide won't."

Buck, thank you for the concern and the info.
I was trying to be witty. But I am glad you care enough to raise the issue anyhow. :)

As Moutai is made of sorghum, I guess it can contain levels of hydrogen cyanide and nitrates depending on what kind of sorghum used and at what stage its harvested. But who knows what els they add... thinking of that manufacturers of milk powder can add melamine cyanurate to fake protein levels, people making counterfeit booze (or even the real thing) could add God knows what.

This kind of counterfeit can be avoided by adopting the technology which can assure your brand protection. I found one of the good technology offered by the www.esealinc.com which assures brand protection and genuine products to the customers too. Thanks to eSeal