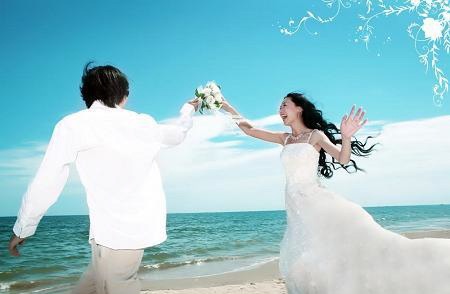 Marriages among Kunming couples in their 30s are ending in divorce because of extramarital affairs and couples in their 20s are getting divorced simply because they can't get along with each other.

That was the conclusion of one marriage counselor analyzing the news that divorce rates have been continually inching up in Kunming in recent years and in some districts have now reached an annual ratio of one divorce per every three marriages.

According to a Kunming marriage counselor named Wang Fang (王芳) the rising divorce rate has been concentrated among people born in the 70s or later, and especially in those born in the 80s. The latter group, the so-called "post-1980" (80后) generation is notable for a high rate of only children among urban families, the result of China's one-child policy.

"The post-1980 couples just can't get along with each other," Wang told Kunming Information Hub. "This is especially true after lightning courtships and subsequent marriages when the couples have difficulty running a household together. These types of marriages often quickly end in divorce."

The Kunming trend toward fast marriage and subsequent divorce mirrors a nationwide phenomenon that is particularly strong among people who grew up without siblings.

There has been about one divorce per every 4.3 marriages across the city of Kunming in the past few years. But now Wuhua and Xishan districts are reporting that divorces are closer to one per every three marriages, with divorces in Xishan district up sharply for the first part of 2010 compared to the same period last year.

Between the beginning of the year and this past Sunday afternoon Xishan district had recorded 1,029 divorces and only about 2,500 marriages—about one divorce for every 2.4 marriages.

Transport, housing, water, marriage - just a tick in the box.

it seems the single child policy in the 80s and afterward is the root cause, i think.

when i was in beijing in the early 90s, i was fascinated by what i saw, four adult watching a teen enjoying a saedae in front of the big M, and the parent was clearly enjoying being hit by the little one protecting his spoil. the little sweetie grows up with no concept of sharing.

Higher divorce rate is a common trend in societies that move away from farming based economy towards industry and services economy. Disturbingly enough, it is often described as a loss of moral standard attributed to some social disfunction widely known, for china the one child policy.

Sociologist, or your own careful observation, shows that it has more to do with the fact that women gain access to some level of financial autonomy, allowing them to break free (at least partially) from some of the most social pressure to conform to the established order. In short with their own job (even crappy ones) they can choose to conform or get away form the role of good compliant housewife.

My personal observation is also that Chinese men tends to have an attitude that will only accelerate this trend, as a lot of them have trouble breaking with tradition, especially telling their parents that "no she is not there to serve you".

Lastly, marriage in China induce a wagon of commitment and expectation from the family. It is easy to say i will support you when you get married but the harsh reality of what it actually means financially can be a serious strain for a marriage (try to buy a house for yourself and both set of parents before your 30 in today's China!). A strain not helped if the lady has some high expectation for her lifestyle.

I cannot understand why Chinese (or other) spouses would divorce their spouse because he/she is having an affair. Now, before you flame me, please read on. If upon discovering your husband/wife is having an affair, why would you let an outsider mess up your family? Assuming you married for love and the sentimental attachment is still there - why not instead do all the positive things necessary to get your spouse to dump their lover - and THEN decide whether or not YOU want to end the marriage on your own terms. Now YOU are in control - not some outside force.

Now, of course this has financial repercussions - but if you're in control - surely you can also control the financial benefits from a divorce - but I'm guessing that with the family back in harmony - why split?

The reasons for a divorce after an affair is because marriage is about trust. Marriage not based on trust will surly crumble unless there is other outside factors. The second reason is that humans are emotional beings, that's our nature. We can't control our envy and jealousy. We can't put it out of our minds and that inhibits our ability to continue to love that person which in turn inhibits our ability to live that person. Interesting side note, I think I read something many years ago about a research finding that men are more tolerant of emotional affairs than physical ones and for women it's true of the opposite. In other words, as long as it doesn't get physical, men could careless about flirtations while women are more forgiving of physical infidelity if the man was not emotionally attached to the other women.

Tonyaod et al
The point was to totally revenge on the cheating spouse...after winning him or her back overwhelmingly and getting rid of the cheating partner(s) - then (assuming one still wants to) dump the cheater...on your own terms...

Why go through the hassle when you can get a divorce and get half of his assets and maybe more if you can prove his infidelity?

It is valid for couples to divorce for 3 main reasons:

If couples divorce for valid reasons,then it is right to end their marriage.But if they divorce for trivial reasons,I wonder why they ever married each other.Was it just to have kids or infatuation with the other person?

"It is valid for couples to divorce for 3 main reasons:

where do you get this stuff from?

Just wondering if anyone can list to/for us the different societies, NGOs, counseling companies, marriage agencies, gov depts, legal services that are helping to prepare couples for marriage, before they sign the dotted lines for divorces and after they are divorced and apparently the victims of the separation

June 19, 2021 "I own a three-bedroom apartment with two west-style bathrooms, a west-style kitchen and a West-Hill-View balcony. It is nearby Dian Chi and West Hills …"
Tutor Wanted evadd

June 18, 2021 "Hey, you guys, I am Lily, in the past,I was a teacher with teaching experience of over 10 years,now I want to learn some Japanese and improve my Engl …"
Living in Kunming AlPage48