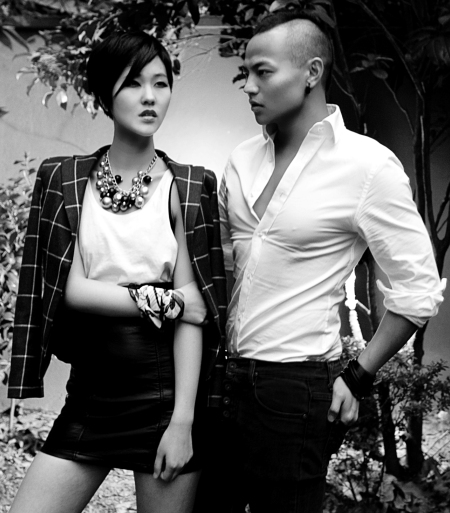 Shxpir (r) and his stylist partner Will

After a few years of dabbling in different creative pursuits in Kunming, Yuxi native Shxpir (pronounced 'Shakespeare') left for greener pastures in Shanghai in early 2009. Today he is a fashion photographer with a growing buzz around him. Together with his stylist partner Will, Shxpir is building up his commercial and fashion photography business with a growing list of media and corporate clients. GoKunming spoke with Shxpir about making the jump from Kunming to Shanghai:

GoKunming: Why did you decide to move to Shanghai? What are your goals there?

Shxpir: I like fresh, new things but Kunming is too small, after living there a while, I needed to get out. I just wanted to go to another place and have a look around. I'd been to Beijing for one year, and then eventually asked myself why I hadn't tried Shanghai.

So in 2008 I went to Shanghai and stayed at a friend's house for a few months to see what it's like to live in Shanghai. I found it to be massive, and interesting. After returning to Kunming, I started preparing to move to Shanghai. I guess my preparation wasn't much more than thinking to myself "Go to Shanghai. Go to Shanghai." One day I made my decision and bought the plane ticket. I showed up with nothing and no plan.

GK: What were you doing when you were living in Kunming?

Shxpir: I worked on some art exhibitions but didn't really get into it. Surprisingly, I ended up choosing hiphop dancing and was a teacher for a while. I was all over the place. I just do what I want to do. Later I started working on graphic design and was also designing clothing and accessories. Eventually my friend Youcai and I opened a small workshop called TV Design, which specialized in bag design.

GK: How did you end up getting interested in photography?

Shxpir: When we were still doing TV Design, we needed to take photos to advertise our products. We hired a Kunming photographer and weren't very impressed with the results. Afterward, Youcai and I decided that we may as well just take our own promotional photos. So we got some friends to be our models, grabbed some bags off our shelves and with a 300 kuai Samsung camera and took my first fashion photos.

I didn't think the results were that impressive, but many of my friends didn't believe that I'd shot the photos. They all thought they were images taken from magazines. Some customers even thought we were a foreign brand. That's around when I discovered that I was really enjoying taking photos. 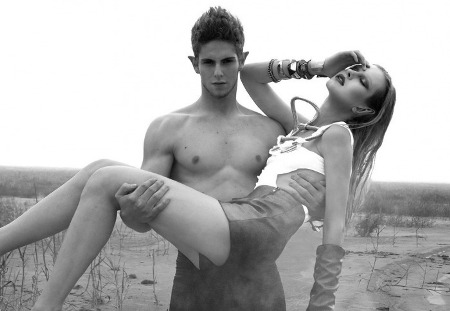 GK: What are some of the biggest challenges you've faced in Shanghai?

Under these circumstances it was pretty much impossible to find work. Looking back on those days now, I feel like in those days I was pretty tough. I was stupid, but I was giving it my all. People said I should have found work before coming to Shanghai, but I didn't care about that, I just showed up. I get an idea in my head and I just go for it. 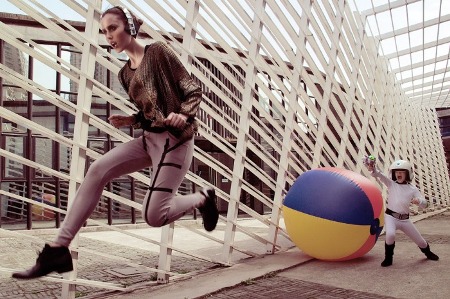 GK: What kinds of moods or emotions do you like your photography to convey?

Shxpir: If a hundred people look at a photograph, they'll have 100 different takes on it. This is really hard to say, all in all I just want to be a different kind of photographer... I want to be skilful, fun and international.

GK: What kind of feedback has your work generated in Shanghai?

Shxpir: Feedback? It's quite strange, a lot of people look at my photos and think they were definitely taken by a foreigner, I don't really know why. A lot of people ask my partner Will if her partner is a foreigner. Will also thinks it's somewhat awkward and rather amusing.

I'm not sure whether to consider this a good or a bad thing. Maybe our work just looks different... we're not afraid to play and have fun with our work. I guess Chinese people may be too conservative.

Shxpir: The city's beautiful, at least the French Concession is. I like the feeling of the small roads here lined with London Plane trees. It's quiet and comfortable, and where I'm living at the moment. The Bund is also beautiful.

As far as work goes, there's no doubt that working in Shanghai's a bit better than working in Yunnan, there's just more to work with here. The people you work with here are more professional, and people generally have a little more taste. It's just easier to do better work here.

GK: What do you miss about Yunnan?

Shxpir: Damn... too much. All kinds of food for sure, Shanghai food is crap. I miss fried Yunnan potatoes, cold rice noodles, barbecue... I also miss the climate. Yunnan people are easier to get on with than people in big cities, everyone's a lot more relaxed. 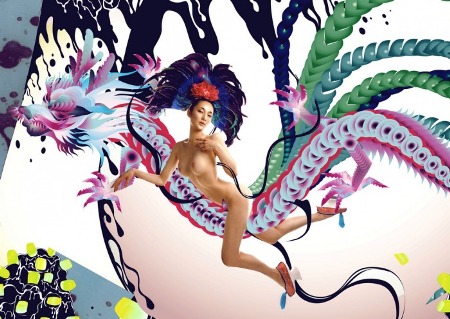 GK: Where do you find your models?

Shxpir: Usually through agencies, but if someone I know has a good vibe about them, I'll shoot them too. I've taken quite a few photographs of my friends.

GK: What advice would you give to any young people in Yunnan thinking about chasing their dreams in a bigger city?

Shxpir: If you're not ready to suffer, don't even bother thinking about it... it'd be a waste of time. Every day I hear about or see people from outside of Shanghai that have been here for two or three years giving up and moving home. Two or three years is a lot of time to waste.

I love their mix of retro and futuristic, go check their website (www.shxpir.com/), its full of more good photos. Also check "the edge" website (edge.neocha.com/tag/shxpir/), it has funny narrative about some picture. A few photos there have a fairly homo-erotic feel and remind me of the work done by Pierre & Gilles.

This is not really the kind of image I associate with China, even its art scene. I also find refreshing the surrealist taste of their image. I think it has a diffuse feel of derision, mocking the current obsession with modernity and beauty.

He is great photographer with brilliant talent!
love it!!!!!