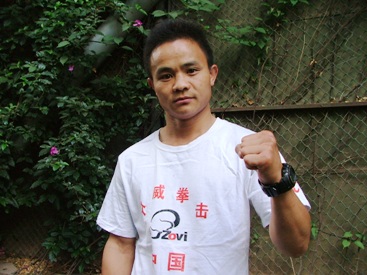 For some, a day in the office means sitting for hours in front of a computer; for others it means spending all day preparing to beat the crap out of a stranger. Soft-spoken and extremely polite, 28-year-old Xiong Chaozhong (熊朝忠) doesn't initially come across as China's top hope to crack into the upper echelons of the boxing world – but that's exactly what he is.

This Friday night at the World Expo Garden Hotel, Xiong will fight Yasuaki Satou in a bout that, should he win, would propel him into the World Boxing Organization's top ten light flyweights in the world. Entering the world top 10 would make him eligible to challenge current WBO light flyweight champion Iván Calderón of Puerto Rico for the world title. No Chinese boxer has ever been world champion in any weight division.

But despite being China's top flyweight boxer with a 13-3 record, Xiong, an ethnic Miao (Hmong) from Wenshan near the Vietnamese border, needs to defeat the highly regarded Yasuaki before he can start thinking about any title fights. GoKunming recently chatted with Xiong at the Expo Garden Hotel gym to find out how ready he is for Friday's fight:

GoKunming: How did you end up getting involved in professional boxing?

Xiong Chaozhong: I used to scrap a lot when I was younger, and in 2006 one of my cousins convinced me to try boxing professionally, so I moved to Kunming.

GK: If you win your fight Friday night, you'll be ranked in the top 10 in the world. Do you feel any pressure?

Xiong: Nah, not really. I'm not feeling any pressure... it's just a sport.

GK: What different places have you fought in over the last four years?

Xiong: Kunming, Chengdu, Luzhou... I've also fought in Japan and Thailand. It's cool to travel but I like fighting in Kunming, I guess it's because I'm from Yunnan.

GK: Do you enjoy fighting abroad?

Xiong: I like going to Thailand and Japan. Because I train at altitude in Kunming it always feels like I can run forever in those places, but it's pretty hot over there.

GK: When you're training for a fight, what do you eat? 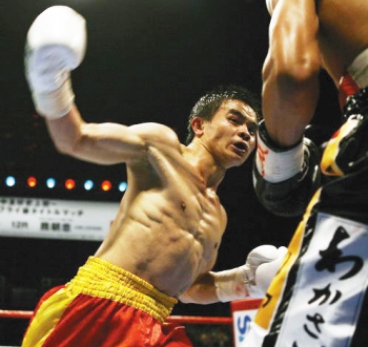 GK: What has changed about you as a person since you became a professional fighter?
Xiong: Every aspect of my life has changed. I'm more confident now and have learned a lot of new things and had new experiences. Before I decided to box, I'd never flown in an airplane or left China before.

GK: Are there other places you'd like to fight?

Xiong: Yeah, I wanna go to Vegas. In boxing America is as big as it gets. It's the holy land of boxing.

GK: If you win Friday do you think you may inspire other Chinese to step into the ring?

Xiong: Boxing is still developing in China and it still has a long way to go, but perhaps if someone is thinking about taking up boxing and they see someone else like them win, that may get them started. 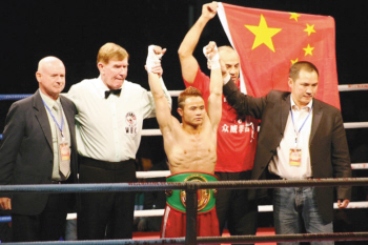 GK: Who are your favorite boxers?

Xiong: When I started boxing I thought Mike Tyson was the greatest. I thought he was amazing. But he's been retired for a while now and I'm more into Manny Pacquiao - he's amazing.

GK: What do you think when you're in the ring?

Xiong: Beat the other guy. That's it.

Good luck and hope you win. Hmong in America are wishing you the best. Make us proud!!!

What's the deal with tickets for the fight?

No kidding! How you gonna post this and not tell us about tickets for the fight? Are they even available?

We initially had some difficulty getting information about where to get tickets and the prices. Now, unfortunately, we've finally learned that the event is sold out.

Anybody who was here for the Australia vs. China World Cup qualifying match a few years back can tell you the tickets for major sporting events move in mysterious ways.

hmm, might try pretending to be a foreign journalist and blag my way in.

So who won the fight? I can't find results anywhere online.

Also thought you might like to know that every site I saw listed him as Xiong Zhao Zhong. 朝 can also be pronounced Zhao meaning "morning" or "morning sun."

Xiong ended up winning by decision in a fairly close fight.

Xiong is listed as Zhaozhong elsewhere, I asked him whether he pronounced the 朝 in his name Chao or Zhao and he said Chao, saying he'd seen his name romanized as Zhaozhong before and that it was not correct.

Results for fights can be found on www.boxrec.com . As the fight was sanctioned so the official match report will be forwarded from the ABCO to the website via Patrick Cusack the match supervisor.

@mamasaidknockuout: When I went to do this interview, I spent a few minutes waiting for Xiong in the gym and was asked in English by one of the guys there if I wanted to box... it seems like you can just rock up there if you want.

If you want to get in touch with Tiger/Zovi, there is a contact email at the bottom of this post: www.gokunming.com/en/blog/item/20/pugilism_for_the_people

i found a website for the boxing club too so gonna scope it out.

He's from Wenshan, China which means his hmong/miao dialect will be easily understood by hmong americans.

He knocked out Yasuaki Satou 2 times and STILL lost to decision!!!??? FFFFUUUU judges. Not only did he knock Yasuaki down 2 times, he made Yasuaki's face look like something out of a horror movie. FFFFFUUUUU judges. there was only like 3 rounds that i can honestly say Yasuaki took. the rest of the rounds, Yasuaki was back-peddling and getting his pipe cleaned out. FFFFFFFUUUUU judges.