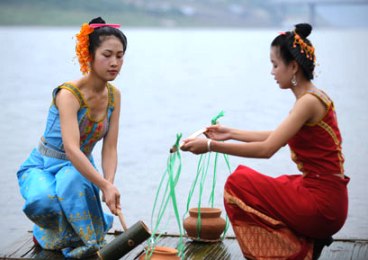 Today is the beginning of the three-day water-splashing festival (泼水节), celebrated by the Dai ethnic group in southern Yunnan's Xishuangbanna, but the drought plaguing much of the province will limit the festivities.

Traditionally a celebration of purification for the new year, the water-splashing festival also takes place during the hottest time of the year in southern Yunnan and much of nearby Southeast Asia, making it as much of a water fight as it is a traditional holiday.

The festival is a major tourist draw for Jinghong, the capital of Xishuangbanna.

The water-splashing component of this year's festival in Xishuangbanna will be limited to two hours, from noon to 2 pm on Thursday. The local government has declared a slightly incongruous theme for the festival: "Pray and wish for well-being, fight the drought collectively, ecological home, ethnic culture" (祈祷祝福,共同抗旱,生态家园,民族文化).

The festival's Thai cousin, Songkran, is also having a tough time this year. Most festivities for the holiday in Bangkok have been canceled due to last weekend's deadly clashes in the country's capital between anti-government protestors and soldiers that left 21 dead and hundreds injured.

Today was actually the last day of the festival. It started on Tuesday.

I agree with Megan, Chris. I hope you didn't get paid anything for that sloppy journalistic contribution. The culmination of the festival; the "water-splashing" component was on the Friday, not the Thursday. Furthermore, the whole negative tone of your article is not at all reconciled with the immense fun that I had in over a week in Jinghong. There were thousands of other people there who also had huge smiles on their faces, and there were a lot more activities going on that you failed to mention. I guess everybody who was there and had a blast were just very lucky not to have read your article first and been dissuaded from going!