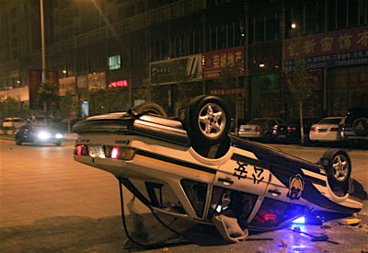 The already poor image of Kunming's chengguan has been further tarnished after a clash between the city management officers and Wuhua district residents last Friday.

The confrontation culminated in a small mob overturning and setting fire to law enforcement vehicles after an altercation between chengguan and a street vendor.

One of the vendors, a 56-year-old woman from Zhaotong named Yang Shengxiu, refused to pay a fine and the officers attempted to impound her three-wheeled cart, from which she was selling fried potatoes.

While contradictory accounts of what happened next have appeared in local media, the cart apparently ended up overturned with Yang lying injured and possibly unconscious on the ground.

As police, medical personnel, and other chengguan officers responded to the scene a crowd gathered and people began to shout that the chengguan had killed someone, according to Li Yingjie, a spokesman for the Wuhua district government.

The crowd then turned violent, overturning nine chengguan vehicles and lighting fire to three. Members of the crowd also overturned one police car and damaged three others.

Nine chengguan officers, four police officers, and an unknown number of civilians were injured before order was restored by around 2am. Police detained 40 people for alleged involvement in the turmoil.

Chengguan officers are charged with enforcing a wide range of municipal regulations and are a frequent source of ire in cities across China, where they have a reputation for being heavy-handed.

In two recent high profile cases a man was beaten and left in a bloody heap on Nanping Jie last August, and another man died after being beaten last October. Both incidents were believed to have been carried out by chengguan officers.

This has even been picked up by the Economist: www.economist.com/world/asia/displaystory.cfm?story_id=15826335
The story mentions various recent cases around the country and that the press has been sympathetic:
"The latest flare-up in Kunming has also attracted considerable press attention. One newspaper website described the eruption as symptomatic of public resentment against local officialdom that could blow up like "a bomb at any time". Another newspaper attacked the Kunming authorities for releasing only bare details and not taking questions at a press briefing on the incident. A third suggested the official version of events, that the vendor had simply fallen over, might be a "lie" (a word even used in the headline). It quoted witnesses saying an officer had pushed over her pedicab, pinning the woman under it. A gas canister had then rolled on top of her, knocking her unconscious."