With the dry, sunny weather of Yunnan's winter calling us out of the office, GoKunming took a few days off to cycle south to the Vietnam border. Using Guo Duomi's post from earlier in the year as a guide, we planned a route through Tonghai (通海), Jianshui (建水) and Yuanyang (元阳) to the border town of Hekou (河口).

Day One: Cheating - Guanlingcun to Tonghai
Rapidly increasing traffic on Kunming's roads, coupled with construction work around Chenggong led us to start our trip the easy way: with mianbaoche transport out of town. For good measure, we got dropped at the top of a hill above Jincheng (晋城) at a place called Guanlingcun (关岭村), on the watershed between the Dianchi and Fuxian lake basins. 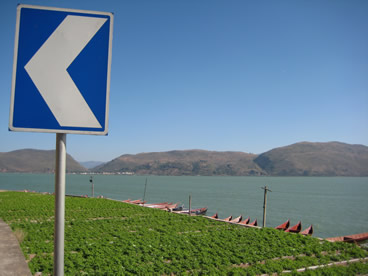 We began to ride at the 32km distance marker on the S214 road, at an elevation of around 2100m. We were due to follow the S214 all the way to Yuanyang. A descent of 11km blew away the cobwebs and allowed us to get familiar with the adjusted steering of our laden bikes.

After the descent, we joined the Cuida Road (翠大线) which runs along the western side of the Fuxian (抚仙湖) and Xingyun (星云湖) lakes towards Jiangchuan (江川). As is usual at this time of year, we faced fairly stiff headwind blowing from the south. This would be a feature of every day's riding.

At around 31.5km completed, we passed through Jiangchuan, pausing to take on water just after the roundabout intersection with the Yuxi (玉溪) highway. The road stays flat for around 5km, before becoming the Jiangtong (江通) highway and heading upwards for a steady 5km climb. This climb took us back up to around 1900m at the highway's 5km distance marker.

The descent begins with steep downward gradients, but it's worth a stop for the great views of the town and Qilu Lake (杞麓湖). The slope slowly levels out for the roll into Tonghai on Xiushan Xi Lu (秀山西路). The town sits at around 1800m above sea level. 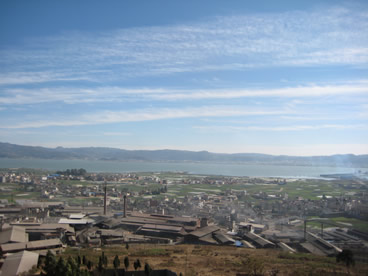 In all we covered 60km over three hours of riding time. As planned, this was a fairly forgiving first day.

Tonghai's population is around 200,000, but it's spread around the lake, leaving a distinctly small-town feel to the place. There's a strong Hui Muslim presence, and Arabic isn't too difficult to spot on signs. A large mosque is situated in Nagu Zhen (纳古镇) on the northwest shore of the lake. The downtown lies to the south of S214 as it runs roughly west-east through town.

Day Two: Ups and Downs - Tonghai to Jianshui
We started out early, the morning crisp and cold, with high cirrus clouds in the sky. As the sun rose above the mountains, the town gradually warmed up as we slurped down some rice noodles for breakfast. We had stayed on the S214 road, just near the 93km distance marker, and it was from here we set off toward Jianshui, which we worked out would be at the 170km marker. 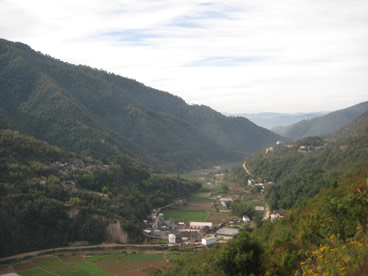 The road out of Tonghai is easy to follow, with a gentle 2.5km climb providing a good warm-up. You'll pass the entrance to the motorway to Jianshui, which is more direct, but not open to bicycles. The descent starts soon after - other than a few bumps, it's around 15km of descending to the small town of Gaoda (高大, ~1350m). Dress warm for the descent, especially if you're starting early, as the steep eastern side of the valley keeps stretches of the road in shade. 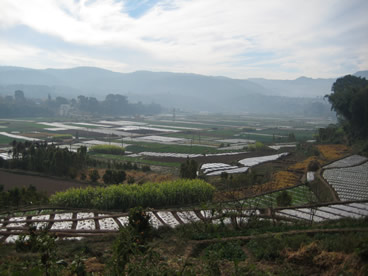 In Gaoda, watch out for the left turn which keeps you on S214. If you see the 1km marker on S216 (like we did!) you've overshot. Back at the left turn, there was a sign we'd seen pointing us to Jianshui on the S216, but closer inspection showed it only applied to large vehicles. Past the turn, the descent continues, but at a lower gradient until you roll into Qujiang (曲江, ~1300m). We stopped for lunch here, just short of noon, with 31.5km on the clock.

Soon after we rolled out of Qujiang, we passed another motorway entrance. The road is undulating, with enough climbs to keep us challenged. At the 136km marker, around 13km out from Qujiang, we were up at around 1500m, and at the 143km marker, we were at around 1650m at the town of Lihao Zhai (李浩寨) and feeling a little worse for wear. Water and a rest helped us refocus.

After Lihao Zhai, there's a lot more down than up, and the refocusing was complete. The finale comes with a fast drop off into the valley and then a steady descending run into Jianshui. The town's around 1250m above sea level, which is low enough to start feeling warmer. 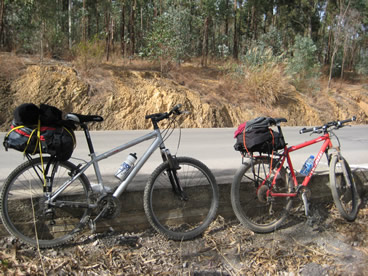 At the end of the day, we had 80km on the clock which we'd covered in 4hr 15mins of rolling time.

Jianshui was something of a surprise. The town's tourism machine seems to be gathering steam. Several sites of interest are clearly marked on roadsigns, and a pedestrian street with restaurants and bars is to be found near the Zhu Family Gardens (朱家花园) off Chaoyang Bei Lu (朝阳北路) where we sat down for teppanyaki and a few well-deserved cold beers.

Nice! I'm actually planning going from Shanghai to Kumming, then drop down into Vietnam as you. May I ask you, how is the wifi in these towns in China in the hotels, etc? That is something I really need. Thanks for any info on that you can provide me.

Wifi available in many hotels in cities and larger town in Yunnan. If you say you need wifi, I'll believe you - but why?

If you have a Chinese sim card you can sign up for their 3G or 4G services starting from around 10 or 20 yuan a month. Then you'll have internet access everywhere you have a phone signal. Real wifi is usually available free in cafes etc and unlike in some other countries you don't usually have to sign up to some crap spam-filled advertising site.