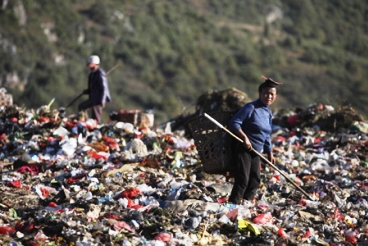 Kunming facing garbage crisis
Reuters is reporting that Kunming is facing a garbage crunch, with the city's main west and east garbage dumps "fully saturated" and facing closure before the end of this year. It is estimated that Kunming produces 1.3 million tons of trash annually.

Kunming has a plan to bring three new garbage processing facilities similar to the new Wuhuan Incineration Plant online in the coming years. Using a chemical process, the plant is reportedly capable of producing electricity while processing garbage.

Schools, buses on heightened H1N1 alert
Classes at Kunming University of Science and Technology's Oxbridge campus have been temporarily canceled due to a recent outbreak of H1N1 virus (aka swine flu), in which 34 students have been confirmed to be carrying the virus and "around 200 or 300" students have been quarantined on campus. The school is home to 5,000 students.

Concerns of a large-scale H1N1 breakout have also led to Kunming's bus companies increasing hygiene precautions on the city's 3,200 buses. Buses now get a preliminary cleaning after the completion of each route in addition to daily disinfections.

Indian media: It's time to connect with Kunming
Indian newspaper The Times of India is calling on the Indian government to reconsider its decision to not rebuild the Stilwell Road, an old World War II supply route that once connected Kunming with Ledo in northeast India's Assam State via northern Myanmar. According to writer Saibal Dasgupta, India's concerns about China's growing regional influence is feeding into behavior that only amplifies India's increasingly weak regional position:

There is no doubt that India needs to be careful about handing over the advantage, especially in a situation where Beijing's influence over Myanmar is growing by the day. At the same time, India needs to find ways of taking advantage of the vast business and cultural potential that Yunnan offers.

Marianas Islands courting Kunming tourists
The Commonwealth of the Northern Marianas Islands (CNMI), a group of Pacific islands administered by the United States, is hosting Kunming television media this week with the goal of luring increasingly wealthy Kunmingers. A local television crew producing travel shows for Kunming TV will film in Saipan and Tinian, according to a Saipan Tribune report.

Marianas Visitors Authority (MVA) officials have high hopes for the upcoming CNMI travel special, which is expected to be viewed in around one million Kunming households in early December.

haha... the schools "quarantine" is useless. Students regularly leave the school. There's even a path between the bushes where they leave.

Many students have already gone home. Supposedly they're all supposed to come back now and sit around to do nothing.

Plus they let everyone and anyone talk at the main gate.

With regard to the garbage crisis, this is a must-see posting: www.chinahush.com/[...]
Amazing and horrifying pics by a CHINESE photographer!
Lu Guang (卢广) from won the $30,000 W. Eugene Smith Grant in Humanistic Photography for his documentary project "Pollution in China."