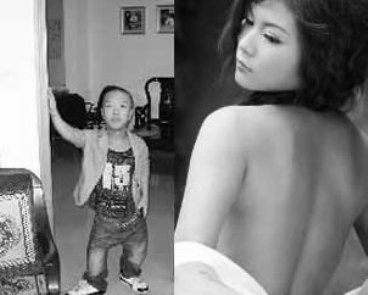 On October 11, Qiu, who performs under the name Beibei, posted an online ad for a wife. His conditions: she must be 40 centimeters taller than him, less than 28 years old and a university graduate. In return for marriage, Qiu offered his wit, stable income and private estate.

Chuxiong native Peng Chunping (彭春平), better known as 'Yunnan Naked Girl' responded to the ad with a marriage proposal of her own. Peng is 1.6 meters tall and 21 years old but does not have a university degree.

"I truly love Beibei. Ever since I saw the advertisement, I've decided to live with him ever after," Peng told the Chinese-language Information Times.

Peng first gained notoriety in China in July by posting naked photos of herself online in what she said was an attempt to find her mother, who she says left her after a failed suicide attempt by Peng. She has yet to find her mother.

Report: 90% of Kunming's timber imports illegal
A new report by campaign group Global Witness states that although trade between Myanmar and China in illegal timber has declined significantly since 2005, there is still substantial traffic of illegal timber from Myanmar into Yunnan province.

The report, entitled 'A Disharmonious Trade', is based upon field research in Myanmar's Kachin State, Yunnan, and China's coastal region between 2005 and 2009. The report states that in 2008, Kunming customs processed 270,000 cubic meters of logs and 170,000 cubic meters of sawn timber, 90 percent of which was illegal.

According to the report, timber is often transported into Yunnan at night, "official checkpoints avoided and documentation routinely falsified. In some instances, local enforcement agencies have turned a blind eye to smuggling; sources claim that corruption and bribery are rife."

The report recommends that Yunnan strengthen awareness of and compliance with the May 2006 'Interim Measures to Manage Timber and Mineral Cooperation between Myanmar and Yunnan Province'. It also recommends that Myanmar's ruling junta work toward stopping illegal logging and timber trafficking.

Xishan district to target spitting, littering
Starting today, Kunming's Xishan district will begin a new campaign in which district hygiene department employees will patrol the streets looking for spitters, litterers and others who infringe upon general cleanliness.

People caught in the act of spitting, littering, dumping dirty water, painting graffiti, posting ads without authorization, walking on grass will be subject to fines ranging from 100 to 500 yuan.

I'll pass on my hopes of becoming a shorter person, but it is impossible to ignore the article about illegal timber imports. Permit me to quote, "... trade between Myanmar and China in illegal timber has declined significantly since 2005."

My goodness, the trade has declined significantly down to 90% ... whatever next!

Nothing is impossible. If you believe, ture love is ture

Bernie, what it means is that though volume of illegal timber has decreased, 90% of the total amount of timber coming through is still illegal.

@Xiefei - I think that's what I said.

What he means is that the total volume of trade from Myanmar has decreased significantly. So even though 90% of the timber is still illegal, the total illegal timber being imported has decreased dramatically.