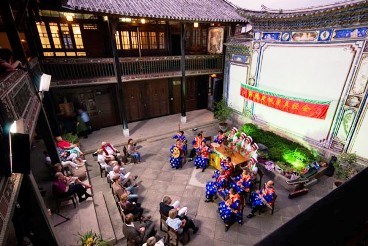 In the last fifteen years, Yunnan has gone from being a best-kept secret to a must-visit travel destination. The old towns of Lijiang, Dali and Shangri-La have changed from rustic backwaters into highly commercialized versions of their former selves.

In wake of these tourism-driven changes, the search for new towns that preserve the cultural and architectural traditions of Yunnan's ethnic minorities is well under way, with Yunnan's 'second tier' destinations such as Shaxi, Tengchong and Lugu Lake all receiving more domestic and foreign travelers.

The small town of Xizhou (喜州) is another example of an increasingly popular 'off-the-beaten-path' stop for visitors to Yunnan. About 30 kilometers north of Dali, Xizhou has developed a reputation for its protected sites highlighting Bai architecture.

With full support from the local government, American couple Brian and Jeanee Linden, who have been splitting time between China and the US over the last two decades, have established the Linden Centre – a boutique hotel and cultural retreat – in one of Xizhou's protected sites. GoKunming spoke with Brian Linden to find out more about what's happening in one of Yunnan's up-and-coming travel destinations:

GoKunming: Why did you choose Xizhou as the location for your cultural retreat?

Brian Linden: Xizhou has historic prominence as one of the few villages with a population of less than 2,500 people and a cluster of over 100 protected buildings. We are proud to be among the first foreigner couples to take over a Type A Cultural Relic. This means our building is one of the most pristine examples of Bai traditional architecture and is protected at the same level as the Great Wall and Forbidden City.

We contacted various levels of government and felt that Yunnan was the ideal choice given its ethnic diversity, scenery, weather and architectural heritage. The local government and villagers in the Dali region were extremely supportive and welcoming.

Xizhou has a history of bringing in people of different cultures and ideas. It was a site for Yale in China during the 1940's and many writers and artists were living in Xizhou. The writer Lao She called Xizhou "The Cambridge of the East." We would like to renew this spirit of bringing together people of different cultures to learn from each other.

GK: What is the philosophy behind the Linden Centre in Xizhou?

BL: The inspiration for our Centre comes from both the miraculous results of China's recent economic achievements and our melancholic longing for the 'old' China that we experienced in the 1980s. China's changes have made the urban experience less than exotic to the experienced traveler. During our 25 years of traveling and doing business, we have had to go further afield to touch the older, more traditional China.

By 2004, we decided that we should try to establish a cultural retreat and sanctuary in a functioning old village to share the China that still survives under the cement and neon veneers of the major cities. Our goal was to source a historic complex and nurse it back into its dynastic glory. We were able to do this in the village of Xizhou.

GK: What are the challenges in running a boutique hotel in rural Yunnan?

BL: Personally, we feel very few challenges. This is a lifestyle decision, a project of passion. Once the basic necessities like water and electricity were addressed, we found the daily challenges to be surprisingly manageable.

GK: What makes Bai architecture distinct from that of the Yi or other minorities in Yunnan?

BL: Bai architecture, especially in Xizhou, displays a level of sophistication and grandeur seldom seen in a rural setting such as our small village. The traditional Bai style of building reached its zenith among the wealthy group of merchants who decided to settle in Xizhou.

Most Bai courtyards have gone beyond the mud brick and wood architecture of the other ethnic groups. Xizhou's location near the Dali marble quarries ensured that the complexes had ample stone for the structures and decorative marble for the unique architectural highlights. 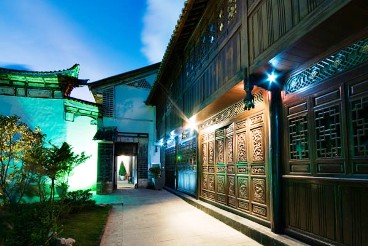 GK: What kind of role does the Linden Centre play in Xizhou?

BL: In our own way, we want to set a precedent for sustainable cultural preservation. We have consistently been the staple of new ideas and fresh perspective in terms of our approach to the Centre's renovation with the additions of priceless antiques and artifacts from Yunnan.

More simply, we want to extend the idea of the Centre into the village itself, allowing the experience here to flow easily. This starts by showing great respect for the villagers and treating them like family. We have hired mostly local workers who often bring their family and young children into the Centre for our atmosphere and occasional fun. We teach weekly English corners to the villagers for nothing in return and help plan games and activities.

GK: Do you have a plan for more retreats in Yunnan or elsewhere in China?

BL: Yes. We aim to create environments in the region that honor the traditions of the past, helping develop sustainable models for restored historical complexes. We want to celebrate the artistic traditions of China and facilitate the sharing of these in a structured manner. Current concrete examples of this include our efforts to procure and restore the former Flying Tigers Radar Station and Village Library, which served as the educational center of Xizhou during Yale/Huazhong University's stay in the village.

In each case, we will develop museums that will trace the stories of the wartime efforts in the Dali valley. The Flying Tigers have left an incredible legacy for all American visitors in the region and, yet, there is no museum highlighting the efforts of the Chinese and Western military in the region. We will soon be looking for organizational support to pursue the two aforementioned projects.

We also own a second complex, one of the only Bai complexes to have Shanghai Deco elements - it was built by a Xizhou man who made his money in Shanghai and returned to build this complex. We are developing a refined Atelier for the study of the arts: specifically painting, writing, music and photography. This second complex is large enough to regularly host 4 artists-in-residence as well as a group of adult students. Younger students will use the Atelier for studio space and will be housed in a restored third courtyard.

GK: Xizhou is becoming an increasingly popular stop for tourists - what are the positives and negatives with regard to this trend?

BL: Xizhou, given its smaller size and later stage of development in the tourism marketplace, will always be different from the first wave of commercially developed destinations such as Dali and Lijiang.

Another increasingly known element of Xizhou that differs from normal tourism in Yunnan is the concentration of culturally significant estates built during the Ming and Qing dynasties. Yet, just like most of developing China, many concrete buildings were introduced in the last 30 years. The more derelict ones are being replaced with fairly refined Bai-style structures to accommodate and cater to a more affluent tourist audience.

We certainly appreciate the greater levels of elegance and beauty the project of 'Ancient Xizhou' brings to the area. The roads are being restored to the times before mass concrete was poured. Waterways will be reopened. Cars will be prevented from driving in the inner town. Power lines will be buried. Many of the reasons we have fallen in love in Xizhou will be amplified with the greater attention to detail and quality, while all the more bringing consideration to the culturally immersive environment.

Unfortunately, larger amounts of people will inevitably inject a level of commercialization affecting the local customs and traditions. This is perhaps unavoidable, given the lucrative market size of domestic Chinese tourism. Our experience, however, with the Culture Bureau and government officials leads us to remain optimistic that Xizhou may be able to balance the ancient with some modernity to create a new and positive paradigm.

Bump for this fine interview by Chris. Oldie but a goodie. Rest assured Brian and Jeanee, The Linden Centre is still standing magnificently. The patio view of the moutainscape is sublime. Less crowded than last year where waiting list was required. Now is a opportune time to visit. Unfortunately, Xizhou's park further down the road has been closed since last September due to road construction and has yet to reopen despite three wheelers and horse drawn carriages hawking tourists.

The dining area's homage to Flying Tigers is a reminder US-Sino relations were once intimately closer. USA and China need to rekindle that bygone spirit if ever is the time.